Wes Vernon
The end of America as we know it?
Socialized medicine-Part 1

February 9, 2009
President Obama has lost his pivotal health care "Czar." But forget about uncorking the bottles to celebrate. Someone will soon take his place.

Just two days after the voters of South Dakota dispatched three-term Senator Tom Daschle to private life in 2004, this column (in a previous incarnation) gave him a big sendoff  "Let the door hit you on the way out."

That was in part a reference to the fact that Daschle  a coldly liberal lawmaker who had survived politically by paying mere lip service to his constituents  was finally ousted when voters connected the dots of his double-dealing. Daschle's formula was to feed the folks back home generous helpings of his South Dakota "aw shucks" performances. Meanwhile back in Washington, he had done considerable damage to the institution of the United States Senate. It was he  as Senate Democrat leader  who engineered the policy of making the filibuster a matter of routine, instead of a weapon for use only in highly exceptional circumstances, as originally intended. Senator Daschle used the routine filibuster to politicize judicial appointments beyond the damage he and his fellow Democrats had already done.

Let the door hit you (again)

Now in 2009, having failed to get his tax dodges and influence-peddling past the laugh test with the public (while embarrassing his buddies on Capitol Hill), it would be tempting to renew that sendoff as his nomination for Health and Human Secretary has crashed in flames even before coming to a vote.

However, such joy would be a fleeting. Count on it: We will have little breathing room. Though L'affaire-Daschle may have postponed the day of reckoning, President Obama is not deterred from his ultimate goal of saddling us with government-run health care via the jack-boot.

Before his most recent demise, ex-Senator Daschle was destined to be not only HHS Secretary, but also President Obama's "Health Czar" in the White House. Obama's other "Czars" are to be coordinating (read dictating) policy to the relevant departments. The nominal cabinet secretaries of those departments will be little more than figureheads. Daschle on the other hand, was to be both a White House "Czar" and the nominal department head in the field of health care "reform." He would easily have been one of the most powerful men in Washington.

That may have been overkill on Obama's part, given that Washington bureaucrats are more than happy to salute anything a liberal Democrat president wants to do. Republican presidents, by contrast, find themselves bedeviled by bureaucratic trip wires. But on the issue of dictating your health care  regardless of what your doctor prescribes  President Obama is taking no chances. He wants airtight government control. You the patient will have little  if any  say in the matter.

Note: Notice how the same liberals who say abortion  partial birth or otherwise  is an issue "between a woman and her doctor" are willing  on any other medical-related issue  to tell "her doctor" to get lost.

If you read Daschle's book Critical: What We Can Do About the Health-Care Crisis, he lays it on the line: your health care would be rationed and a Federal Health Board would decide whether you would be granted the latest technological advances, for which payment could be denied even if there is no question that is the surest way of restoring your health or preserving your life.

Grandma's over 65 and could be saved from death's door if a new medical device were deployed? Forget it. Dr. Daschle's proposed Federal Health Board says it's too expensive. You're not worth it. Die, old woman! Your doctor's recommendations don't count. 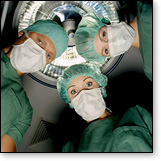 That determination to grab for the clutches of the government this huge slice of the American economy remains squarely at the top of the Obama administration's priorities  right up there with its flawed economic theories that insist the way to "stimulate" the economy is the spend our way onto bankruptcy. That Daschle will not be in charge of the new "health care" government machine is irrelevant. His ideas will guide the effort to put the faceless bureaucracy between you and your doctor.

Mind you, it's not as if that intrusion is something that will suddenly come down on our health care infrastructure like the proverbial ton of bricks. We've been creeping down this road for decades with more and more federal health programs and mandates. Already, health care providers spend a substantial slice of their budgets on staffers who do almost nothing but tend to the complex paperwork demanded by government requirements. The extra expense  a burden demanded by the Ted Kennedys and the Barney Franks of the world  has, of course, driven up the cost of actual health care. That in turn has given the liberal establishment a golden rhetorical gift that says  "Look! The sky is falling! Health care costs are out of sight! [Duh!] Therefore, what we need is more government mandates  i.e., we need the arsonist to put out the fire! Help!"

Dr. Daschle (in spirit) to the rescue

You may be certain that whoever finally is chosen to fill the Daschle void will understand that he/she is to follow the Daschle script. The South Dakotan's book will remain the Obama health care bible.

Ordering up a witch-doctor's brew?

Creating the National Health Board is just the beginning of the new era that is envisioned by the Daschles of this world. The new bureaucracy is to be trusted at the outset with new powers to regulate the current massive health care system  including Medicare, Medicaid, and others. After that, we will get to the real meat of what socialist politicians have been peddling in this country for decades.

At that point comes the expanded bureaucracy with "health care" for those who are not poor and those who are not senior citizens. The government control will be total  regardless of any window dressing on a piece of paper claiming otherwise. That is when we will be looking at price controls, higher taxes, purchase of health insurance by government order, and  as mentioned above  second guessing on technology and medicines.

It's in the book

You think that's scare talk? Don't take my word for it. Here is Dr. Daschle's plan as he himself has outlined it in his own book. The good doctor / tax cheat / political obstructionist himself makes no bones about what he has in store for you.

Daschle cites the Federal Reserve Board as the model for his Federal Health Board. Politicians will appoint its members. Oh, but don't worry, America. The FHB will be "insulated from politics." Sure.

This all-powerful body will then make "complicated medical decisions and [will have] the independence to resist political pressures." Now, here you have the worst of both worlds:

The politicians who appoint these powerful board members supposedly will have no influence on what the board does. You are thus earnestly urged to believe that the politician/appointers will have ideological blinders on when they seek these people/appointees. Anyone ready to take that to the bank?

The great unwashed will have no direct say in the appointments. And assuming the appointees must be confirmed by the Senate, there will be no politics there either, right? Actually, your doctor will be reduced to the status of another bureaucrat. Not the family doctor you trust because you select him/her  rather just someone showing up for an eight-hour shift and a government paycheck.

The decisions of the FHB apparently will be final. How do we know? Daschle says the Board would resemble a "Supreme Court of Health." Statists will cite sometimes silly Supreme Court decisions as "the law of the land," with no room for protest or dissent because "the debate is over," etc. Now these same people will be telling grandma that when bureaucrats issue (what amounts to) her death sentence, "the debate is over because the Supreme Court of Health has spoken," etc. Sure you want that, America?

Lest you think we exaggerate when we speak of the "death sentence," here is what Daschle tells us about the FHB's decrees on how the patient will be "cured": the board's members (uncontaminated by politics, remember) will "help define evidence-based benefits and lower overall spending by determining which medicines, treatments, and procedures are most effective  and identifying those that do not justify their higher price tags."

Issues of life and death are about as personal as you can get. Putting life or death decisions in the hands of unelected bureaucrats reduces the patient to the status of just another number. As Dr. Robert Moffit, Director of the Center for Health Policy Studies points out, the Daschle prescription would put our health  sometimes our very lives  under the control of "a powerful elite who will decide what's good for us and what isn't."

Health care in this country is not perfect. Many of those imperfections are rooted in the fact that government has already stepped in with mandates that have tended to depersonalize (to some extent) the doctor-patient relationship. Before government controls crept in, there was a time when doctors actually made house calls. With some depersonalization of the doctor/patient relationship, the cost has spiraled. But the old punch line on that is all too true to be funny: If you think health care is too costly now, wait until it's "free."

We will explore this matter further as the Obama administration pursues its Daschle-style health care "reform." This series will continue, as new developments and related issues merit.