Wes Vernon
Sotomayor and the First Amendment: the message-shut up if you disagree
Boot camps for conservatives? (The enemies of free speech are on the march-Part 19)

July 13, 2009
When it comes to reasons why Sonia Sotomayor is not qualified for a seat on the highest court in the land, critics of the judge have an embarrassment of riches. There are so many, one has to pause at the opening gate and say  for example  how am I going to get all this in one column? 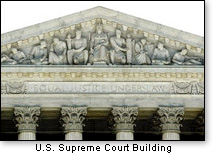 So let's focus on a few of the issues, starting with one that is very important and yet often overlooked: freedom of speech.

The very First Amendment to the Constitution specifically proclaims that "Congress shall make no law respecting the establishment of religion, or prohibiting the free exercise thereof; or abridging the freedom of speech, or of the press; or the right of the people peaceably to assemble, and to petition the Government for a redress of grievances" (italics added). Of 19 decisions Judge Sotomayor has ruled on that issue, the cause of free speech won out in only 5.

The First Amendment, along with the rest of the Bill of Rights, was submitted to the states for ratification on September 25, 1789, and adopted on December 15, 1791. That was 218 years ago.

Most Americans understand (A) the old unwritten injunction against yelling "Fire" in a crowded theatre, and (B) that the Constitution is not a suicide document, as Justice Jackson once observed. Beyond that, the meaning of the First Amendment should be clear to any grade school student. Why do some judges and politicians have trouble understanding it?

Which brings us back to Judge Sotomayor

Having researched Sotomayor's record on this issue, Sam Batkins of the Center of Individual Freedom noted that a batting score of .263 on free speech is a low score in baseball and has far more serious consequences for a lifetime appointee to the Supreme Court, and should give First Amendment supporters pause as she presents her case for confirmation before the United States Senate.

We have all heard of the Stalinist campus "speech codes," which  as often as not  translate into sanctions against ever uttering words that offend liberal conventional wisdoms. Judge Sotomayor not only says that's okay, but in one case she actually ruled that a student could be punished by the school for off-campus speech that "would foreseeably create a risk of substantial disruption within the school environment," which can mean almost anything.

Recall that during the original uproar against campus speech codes, the defending argument was made that, well, constitutional protections do not apply on campus where school rules may be at odds with the First Amendment. In the case of Morse vs. Frederick, Judge Sotomayor not only ruled against 18-year-old Joseph Frederick for speech at a school function, but then in Donninger vs. Niehoff, she ruled that students were subject to sanctions for speech uttered outside the confines of the campus.

Many students around the country have written letters to the editors of newspapers or spoken out at local political functions. Judge Sotomayor's view of the reach of school authority over speech anywhere outside the campus would suggest the late conservative leader Paul Weyrich was on to something when he posited that the time may come when any conservative speech will be outlawed. (More on this below.)

Judge Sotomayor has ruled in favor of not only limiting campaign contributions to unrealistic amounts, but has gone a step beyond and now has suggested candidates should be curbed in what they are allowed to spend to be elected. Yes, I know there are times in the heat of an October campaign season when  bombarded with TV & radio ads 24/7  we have all looked forward to the campaign's end, so that they will get out of our faces. But you know what? Freedom doesn't come without little annoyances, and that's one of them. You have the right to switch off your TV or radio.

So on First Amendment grounds

Senate Republican Leader Mitch McConnell (R-Ky.) is faulted by some conservatives for not rounding up a unified, well-organized GOP Senate opposition to Sotomayor's confirmation, but he had it right when he said on the Senate floor that "I have strong reservations about whether the nominee will choose to follow the First Amendment or [on the other hand] attempt to steer the court to a result grounded in the kind of ideology that she so clearly and troublingly expressed [in her own writings]."

In 1996, Judge Sotomayor co-authored an article in which she equated campaign contributions to bribery, specifying "extensive private, including corporate financing of campaigns." So apparently, Sotomayor would ban virtually all campaign contributions. You may be one of millions of Americans who will contribute to a candidate because you like his record or views on the issues and you care enough about your country to part with a few dollars to help his campaign. That is known as citizen participation, not bribery.

Other issues  justice is blind?

Judge Sotomayor has flat-out said that judges not only will but should bring their sympathies and prejudices to bear in deciding court cases. Not just in her "wise Latina" vs. white male comment which she repeated many times. She's expressed that sentiment many other times, as well. Judicial impartiality, the judge has said, cannot be met "even in most cases."

There is the well-publicized case where the Supreme Court itself struck down Sotomayor's decision to deny the claims of firefighters (17 white and one Hispanic) who alleged discrimination when they were not promoted even though they had passed a race-neutral exam and some of them made significant sacrifices to prepare for it.

Senator Dianne Feinstein (D-Calif.)  a Sotomayor apologist  ignored the fairness issue that swayed the majority on the court. Instead, on Fox News Sunday, the senator said, "I happen to believe that this court judgment is going to place a huge burden on communities because as I understand the judgment  and it was a 5-to-4 decision  you have to be able to show that you can win a court case before you can withdraw an examination which you may after the fact find out the problems with it. Now that places communities in a very difficult situation."

Well  yes, it does. But who created the "very difficult situation," Senator?

Was it the liberal judges you and your fellow Democrats put on the bench or slipped by Republican presidents who thought (erroneously) that they were appointing strict constructionists? Is that how local communities ended up with a crazy quilt of doubletalk regulations intended to promote reverse discrimination?

Or, Senator Feinstein, how about the court nominees who did believe the law really means what it says? You know, Ms. Feinstein, those judges who couldn't get confirmed because of your obstructionist tactics?

Remember when Hubert Humphrey stood up on the floor of the Senate and said if the civil rights law resulted in reverse discrimination, he would eat the paper on which the law was written? Things didn't work out the way he predicted, did they? Because you and your cohorts promoted liberal judges who have saddled "communities" with such a patchwork of confusing and contradictory rules and stipulations that  yes  small wonder local governments are tied up in knots. But you did that, Senator. You and your fellow liberals. Now you're playing the role of the arsonist who wrings his hands and says, "Dear me, how are we going to put out this terrible fire?"

The Supreme Court has ruled in a case involving the gun laws in the District of Columbia that the Second Amendment protects the "individual right to keep and bear arms." But cases are making their way through the judiciary that likely will give the high court an opportunity to revisit the issue.

The National Rifle Association has expressed alarm that in not one  but two  court cases, Judge Sotomayor has ruled from the bench in effect that the Second Amendment notwithstanding, "the right to possess a gun is clearly not a fundamental right."

So the judge has problems not only with the First Amendment, but the Second Amendment as well. Who is to say that she would not abuse the authority of her position to rewrite the whole Constitution? Where will she stop unless she is stopped?

Judge Sotomayor's disregard for the rights of free speech and her short shrift positions on other constitutional guarantees are also troubling when coupled with this administration's many grabs for power, aided and abetted by members of the current Congress.

Under the radar, legislation is wending its way through the legislative morass on Capitol Hill that would give the attorney general the power to label groups that differ with government edicts on any number of issues of intense interest to conservatives. You name it  abortion, illegal immigration, gun rights, and disputes that pit the states against encroachments of federal power.

The measure  HR-645  would authorize funding to create "not fewer than six national emergency centers"  so as to house "a large number of individuals affected by a major emergency or disaster."

One might say that in a terrorist attack, there may be mass evacuations and where are we going to put all these people? But under the wording of the proposal, the secretary of Homeland Security would have access to the camps to "meet other appropriate needs." The "needs" are not specified. Hmm, does anyone remember the camps where American citizens of Japanese descent were incarcerated during World War 2?

Strange things can happen when hysteria strikes. Does anyone doubt, for example, that had not Lee Harvey Oswald  a communist  not been identified as President Kennedy's assassin, conservative activists politically opposed to his policies would have been rounded up?

This legislation, sponsored by Rep. Alcee Hastings, is unknown to most Americans, who would be horrified if they knew about it. Hastings, by the way, was kicked off the federal bench in Florida by the U.S. Senate. He was only the sixth federal judge in American history to be impeached. The charges were corruption and perjury.

So what does an impeached judge do when he's out of work? He runs for Congress, of course, and joins Speaker Pelosi's crusade against the "culture of corruption." Remember, she wanted to make him chairman of the House Intelligence Committee until the blowback from the intelligence community caused her to back off. Just having Hastings as a member of the committee is reason enough for concern, let alone trying to make him chairman.

Adding it all up

This is not to hang the Hastings bill around Judge Sotomayor's neck. But put together these three developments: (1) Judge Sotomayor's disregard of the principle of equal justice for all Americans; (2) Homeland Security's statement last April warning law enforcement officials to be on the lookout for "right-wing" extremists who favor gun rights, oppose abortion, and oppose illegal immigration (that bulletin was withdrawn under the pressure of public opinion, but it revealed a mindset inside the administration); (3) and now, the Hastings bill which could be used to lock up government critics.

All in all  not a pretty picture. We need a Supreme Court nominee who respects not only the First and Second Amendments, but the Constitution and the rule of law.