November 30, 2009
The big media may think they can go on forever ignoring the Climategate scandal  whereby "respected" scientists have been caught red-handed doctoring evidence so as to perpetrate the fraudulent perception of man-made "global warming."

But investigative forces are gathering that clearly indicate the issue will not go away. And if we have to depend on Fox News, Talk Radio, and the Internet to get the facts out, so be it. It may take time, but information will circulate by word of mouth until at some point, the kept-media's stubborn refusal to report the story will make them look stupid.

The Mr. Magoo metaphor again would be relevant. Except Mr. Magoo in fact is stupid. The man can't help himself. Those imperial deciders of what the public does and does not have a right to know who withhold vitally-important information are fully complicit in a cover-up. They know what's going on, they just don't want to let us in on it, or they play it down and blur its significance. 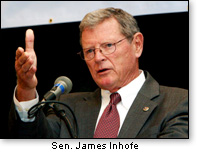 On Capitol Hill, Senator James Inhofe has taken steps toward a full-fledged investigation. The Oklahoma Republican has fired off letters to several scientists who were caught up in the revelation of manipulated data  supposedly to prove a "consensus"  notifying them to retain documents related to the release of the damning emails.

The senator, Ranking Member of the Senate Environment and Public Works (EPW) Committee, says lawmakers "have an obligation to determine the extent to which the so-called 'consensus' of global warming, formed with billions of taxpayer dollars, was contrived in the biased minds of the world's leading climate scientists." A spokesman for Mr. Inhofe affirmed that he "will be working closely with Senator [and committee Chairman Barbara Boxer] on an investigation." (This column did an interview with the Oklahoma lawmaker about his planned trip to the upcoming Copenhagen climate conference as part of a "truth squad." More on that below.)

Senator Inhofe is not alone is pursuing an investigation of what has all the earmarks of yet one more betrayal of the public trust.

The Competitive Enterprise Institute took legal action during Thanksgiving week against several government agencies to force public disclosure of the relevant documents in the case.

CEI Senior Fellow Christopher Horner (author of Red Hot Lies) says he is after information that would reveal "document destruction, coordinated efforts in the U.S. and the U.K. to avoid complying with both countries' freedom of information laws, [as well as] apparent and widespread intent to defraud at the highest levels of information climate science bodies" that has been going on "for years."

As in Watergate, a Climategate cover-up

As you and I were sitting down to our turkey dinners last week, stories in the un-kept media (Wall Street Journal, Washington Times, Fox News, this website, and precious few exceptions in the main media) were reporting that someone (details of this writing are not clear) apparently had hacked into the e-mails of the Climate Research Unit (CRU) of the University of East Anglia in England, whose temperature models (according to its own claims) form the basis for the climate proclamations from the high priests of the United Nations Intergovernmental Panel on Climate Change (IPCC).

Phil Jones  head of the CRU  says he "accidentally" deleted some raw temperature data that was used to define aggregate temperatures in the temperature information CRU distributed. If people in those responsible positions only made "mistakes," why don't they occasionally make one in our favor?

Further, in one e-mail, it is admitted that the methodology for determining aggregate temperatures "renders the station counts totally meaningless." Also secretly acknowledged (but not shared with the outside world) is that "we can't account for the lack of warming at the moment, and it is a travesty that we can't."

Jones also wrote that if ever there is a Freedom of Information Act in the UK, "I think I'll delete the file rather than send it to anyone."

There were such instructions as "Apply a very artificial correction for [temperature] decline." (Italics added)

The school's Vice Chancellor, Trevor Davies, was very defensive, saying the revelations have "led to some questioning of CRU's Climate science research." (No! Really?)

These  together with other e-mails indicating fierce attempts to silence any professors or journals that questioned the "man-made global warming" doctrine  are examples of the fraud perpetrated on the public for more than two decades.

Thankfully, there will be no treaty or binding document that comes from Copenhagen at the Climate Conference gathering there December 7-18. President Obama acknowledged this during meetings in Singapore. Thus, the immediate threat of just such a power grab (discussed in this column November 2) has been lifted  for now.

Senator James Inhofe will be at Copenhagen. He told this column he will attend as part of a truth squad. He and Wyoming Senator John Barrasso will "tell the world that the United States will not support a global warming treaty that will significantly damage the American economy, cost American jobs, and impose the largest tax increase in American history." Also, Americans "will not be a part of a binding climate agreement [that favors] developing nations." The Oklahoman says with U.S. unemployment at over 10 percent, "the last thing we need is another thousand-page bill that increases costs and ships jobs overseas, all with no impact on climate change."

The senator cites an article in the London Daily Telegraph saying that "The worst-kept secret in the world [is that] the climate change summit in Copenhagen is going to be little more than a photo opportunity for world leaders."

Bear in mind, our questions were submitted to the senator before the outbreak of the Climategate scandal  before Mr. Inhofe set the wheels in motion for an investigation of the fraud that is "man-made" global warming.

Senator Inhofe intends to use every lever at his disposal as a senior senator and top member of the EPW committee to see that truth comes out from the whole sticky mess that is Climategate (the scandal itself, as well as the cover-up).

He is confident history is on his side. When I asked  in the event a treaty did come to the Senate  whether he would have the 34 votes to block its approval, Inhofe responded, "The bigger question is if President Obama can get the 67 votes [the two-thirds required] to ratify a treaty." The Senate a few years ago voted 95-0 urging that the U.S. not sign the infamous Kyoto "global warming" treaty. The Senate has defeated "cap-and-trade" legislation three times in this decade, though such a bill was passed by a sliver margin in the House in June. (No way would that have happened if Climategate had been exposed.)

Finally, we get to Prince Albert  a man who has made himself scarce in the last few days (as I write).

The Wizard of Gore

The year 2009 has marked two events connected with The Wizard of Oz.

1  The 70th anniversary of that classic 1939 film classic has been observed with "Hi-Def" showings and concomitant DVD sales.

The title role  played by Frank Morgan  depicts an all-powerful, all-knowing "Wizard" who scares children and dogs with his booming, resonant, and authoritative voice, implying that he  as "the Great Oz"  has the power to grant "a brain" to a scarecrow, "a heart" to a humanly-constructed piece of scrap metal, and "courage" to a lion beast  normally like offering ice to an Eskimo.

In the end, the "Wizard" is shown to be a snake-oil fraud, protesting "I'm a very good man. I'm just a very bad Wizard." 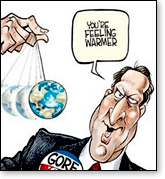 What one must say in defense of that "Wizard" is that at least he owned up to his inadequacies, and did not  for example  blame the cyclonic wind-storm that displaced Dorothy's house from its Kansas bearings on  all together now  "global warming."

The Wizard of Gore (as in Albert, Jr.) does share some characteristics of the original: He seeks fame, notoriety, fortune, or whatever, through the age-old mechanism of fraud. Tales of massive floodings and worldwide droughts surely have literally frightened the children attending required showings of his videos at indoctrination centers called schools.

Unlike the original rascal who operated a console to produce faux thunder and lightning, the Wizard of Gore  possibly not wanting to do anything so ostentatiously suggesting "climate change" (fake or real)  instead resorts to intimidation of another sort  i.e., "The debate is over," or anyone who questions his climate snake oil is "discredited," or "not to be trusted."

Not only does the Wizard of Gore refuse to debate the skeptics, he actually compares them to Holocaust deniers. Furthermore, there is no record of this onetime aspirant of the United States presidency contradicting those among his acolytes who have suggested that "deniers" be stripped of their First Amendment freedoms, or hauled before some kangaroo court and jailed for their expressions of doubt. (Translation: Silence! Dare not differ with the Wizard of Gore!)

A Wizard with pants to his ankles

The 2009 Wizard cannot forever maintain his unaccustomed silence since the climate fraud story broke. And maybe he'll have shown his face by the time you read this. (Wonder what's in Albert's e-mails these days.) The Climategate scandal has erupted with  dare we say it?  a full gale force, with the resulting "inconvenient truths" that threaten to smash away all the eggs in the "very bad Wizard's" political basket. 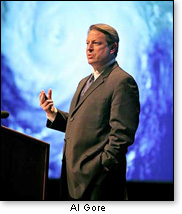 Prince Albert reportedly has even warned conservatives that if they don't climb aboard the "man-made global warming" bandwagon soon, the result will be that when the floods and the droughts come, they will be reduced to political irrelevance. (Some "moderate" Republicans would probably be gullible enough to fall for it.)

Give the Wizard his due, however: His predictions of "climate change" are not entirely without merit. Surely, the fraud uncovered by Climategate could facilitate a change in perceived scientific conventional wisdom on the bogus warming propaganda. That could in turn lead to a change in the political climate on this politically-charged matter.

Senator Inhofe tells this column this issue has already started to garner "tea-party style attention." The grass roots organizations across the land are spreading the word that the "man-made warming" hoax is riddled with traps. The possible result?  out of a job, in the poorhouse, confiscatory taxes if you do have a job (or maybe even if you don't). Government controls on nearly everything you do. Not exactly a bright outlook. Some remember when we had a real president who spoke of America as the "shining city on the hill."