Wes Vernon
Warren Buffett: outfoxing the wise men of Wall Street? Or preparing for the Obama economy?
Railroads (freight and passenger) as part of America's infrastructure

That helpful hint  once let slip years ago by a high government official  was meant to convey the message that we do smart things but that doesn't mean it's always smart for us to brag about them. The always cynical media interpreted it to mean that we're actually ashamed of things we do, and it's not smart for us to advertise them. 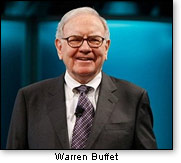 The message in quotes was uttered early-on by President Nixon's attorney general, John Mitchell. (When Watergate became a scandal a couple of years later, it appeared the media had  perhaps inadvertently  stumbled into the truth, but that's another story.)

Back to the first explanation

When Warren Buffett  America's most famous investor  bought up all the stock in Burlington Northern Santa Fe railroad (BNSF), the "wise men [and women]" of Wall Street began a figurative head-scratching exercise that continues to this day.

The latest manifestation of that puzzlement came this past week when Standard and Poor's cut its credit rating of Buffett's parent firm Berkshire-Hathaway from the honored and coveted AAA to the next wrung down the financial ratings ladder to AA+.

That may or may not be a big deal for Berkshire  at least in the short run  but it is Wall Street's way of saying the Oracle of Omaha perhaps is losing his Midas Touch.

If that does in fact reflect Wall Street's conventional wisdom, it may be ill-placed (not that this would be the first time the keepers of the "Big Board" were caught napping).

If Wall Street is merely saying Berkshire is not perfect anymore, that's a "so what?" What entity is? Many of us earthlings thought Buffett was misguided when he backed Barack Obama for President. But, hey, it's a free country. (S&P is only the latest of the credit agencies to downgrade Berkshire. Moody's and Fitch did so early last year  months before anyone knew of Buffett's "all in" headlong dive into the railroad business).

But S&P's rating reduction reportedly is in fact a reaction to Buffett's purchase of BNSF. If that's the case, the decision-makers at S&P may be exhibiting their own imperfections.

The "street" was dumfounded at the news last November that Buffett  in his "biggest deal ever"  purchased the remaining 77.4 percent of the BNSF that he did not already own. At the time, he was quoted as saying, "It's a bet on the country, basically" and as soon as the U.S. is out the recession there will be a higher demand to move goods  which is what the freight-hauling BNSF is in business to provide.

Of course, any high-profile investor would be cutting his own throat if he were to say he made an investment because he had some deep concerns about the future. No matter how you couch those reservations in diplomatic language  if Warren Buffet actually were to utter them, many other investors would "head for the hills," and the market would likely tumble, if not crash. And since the market had not been on anything resembling a "roll" since September 2008, it is understandable that the wisest course of action is seen as putting a positive spin on the move.

Not that there are no positive reasons

The hope that the freight business will ultimately pick up big-time is not totally wishful thinking. But if that were the main or only reason for Berkshire-Hathaway's move on BNSF, Buffett could well have held onto his large minority holdings in that railroad, plus the stock he also owned  and has now sold  in Norfolk-Southern (NS) and Union Pacific (UP)  both of which are also solid, healthy railroads.

So what was he thinking?

We make no claims to special insight as to the Omaha Oracle's thought processes. If it were that easy, we could all be billionaires (in which case, the very commonality of the experience would devalue it).

So why BNSF? Well, one could cite the railroad's expenditure in double-tracking its Chicago-Southern California mainline. Wall Street  ever focused on the needs of the next quarter's earnings  didn't like that expenditure at all. But it is proving every day to have been a wise move in delivering BNSF shipments to customers in a more timely manner, thus attracting more business.

That may be one reason for Buffet's bullishness on BNSF. But the only reason? No, there has to be something else. Somehow, there's this gut feeling that a piece of the puzzle is missing. Why would a long-term investor sink all those dollars into one of America's very oldest industries?

Is this the story? 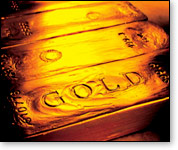 A rail-savvy friend of this column has an interesting take on that  a perspective which we found is shared by others. This school of thought says that Mr. Buffett traded tens of billions of depreciating dollars for a "hard asset" that will be worth something as dollars continue to lose value. When one owns tens of billions of them, depreciating dollars represent massive losses, and trading them now for a railroad is a wise move. Whether or not he could trade that cash for an equivalent supply of gold is doubtful. Where could one find that much gold for sale?

If Buffett is not thinking along these lines, then perhaps (1) He thinks the Obama economy will in fact turn around (as of this writing, he has not withdrawn support for the president); (2) He thinks that  as has happened in so many past crises  Washington will appoint another commission and attempt to solve the politics of the problem without actually solving the problem itself (however, the country senses that this time "Washington" has run out of wiggle room); or (3) A declining economy can take railroads with it. Then again, perhaps Berkshire-Hathaway reasons that even in the worst of times, a railroad  as "hard asset"  is still the safest bet.

On the rail's passenger side...

That enables us to segue into a discussion of the other half of railroading  passenger trains. One "green" blogger expressed the hope that Warren Buffet's interest in freight railroads would lead him into the rail passenger business, as well. Not likely. Buffet is a railfan (he reportedly has an extensive toy railroad collection in his home), but that is separate and apart from his business life. Private investment in freight rail is a good buy these days. But the passenger rail business? That is another story, and has been for years.

A conservative case can be made for support of passenger trains:

Citing such free marketers as Adam Smith and Alexander Hamilton, the late Paul M. Weyrich collaborated with his longtime associate, William S. Lind, at Free Congress Foundation (which Weyrich founded) to author the book Moving Minds. Their case is that infrastructure and defense of the nation are two legitimate functions of the central government.

The authors believe that a critical part of the nation's infrastructure  its railroads  was neglected in the Post World War II era. That is when the Interstate Highway, they contend, exacerbated a situation whereby unsubsidized railroads had to compete with subsidized highways.

By 1980, the nation's railroads  unsurprisingly  were flat on their backs. That was remedied with passage of the Staggers Act, which deregulated the railroads. That revived freight railroading, and today those Class 1 carriers make up the only mainline transportation system in the world that pays for both its operations (in this case, above the rail  the trains and their crews) and its infrastructure (in this case the "hard asset" rail tracks themselves, plus signaling and other support mechanisms that enable the trains to operate.)

The conservative case for passenger rail

That works well for freight. Rail passenger traffic is another issue. No mainline passenger train operation anywhere in the world makes a profit. The Weyrich/Lind book makes the argument that public backing for passenger trains can be justified on several fronts: (1) Infrastructure as a factor in the nation's commerce; (2) National security (reducing our oil dependence on foreign nations that hate us); and (3) Economic development: A rail passenger operation  through its tracks and stations  usually will spur commercial development that is not as easily attained by a highway or a bus line that can more easily be yanked at will. The infrastructure of tracks and stations represents a long-term commitment.

Moreover, Weyrich and Lind say the suburban sprawl that gave birth to our present-day automobile-centric culture was actually of left-wing origins, as government mandates on local building codes separated where we live from where we work and shop.

Moving Minds offers a remedy: A National Defense Public Transportation Act, which would use a system of nationally-coordinated trains and connecting buses. The aim would be to enable anyone to travel from anywhere to anywhere else in the continental United States without having to drive or fly.

As per the conservative preference for local control, the authors write that under their plan, every county in the nation could decide whether or not to participate in the program. They are that confident that it would work simply through its popularity at the ballot box or local government backing.

Bumps in the (rail)road ahead?

Infrastructure will be a big issue ahead, as it merges with the issue of joblessness in the current economy. It is not just the railroads that have infrastructure problems. Our highways are beginning to show their age, as well.

In mid-January, three members of President Obama's Economic Recovery Advisory Board wrote in the Wall Street Journal that our aging infrastructure (including all forms of surface transportation) would ultimately constrain our economic development. And they added, "It's time that we accept that government alone can no longer finance all the nation's infrastructure requirements."

All the more reason for this administration to admit (to itself, if not to the public) that Americans are soured on its scheme to put government between you and your doctor, as well as its cap and tax "climate change" program.

For starters, Washington instead would do well to focus on tax cuts for all job creators  not just some of them. Tax credits for the freight railroads would help them beef up their infrastructure. The Weyrich/Lind plan for better mobility through availability of passenger rail would enable construction firms to put lots of jobless people to work  lots of them.

And if the economy benefits thereby, Warren Buffett's investment in BNSF will have been justified  not just as a hedge against bad times, but for the best of times, as well.