June 7, 2010
Public outrage over the Gulf of Mexico oil spill is quite properly at a high level as we see pictures of dead wildlife and oiled-soaked birds struggling to breathe. Bad as that is, the far greater threat  in substantive and political terms  comes in the form of what that fallout portends for our national security. 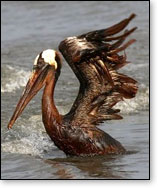 The lawsuits in store

One need not weep for the public relations black-eye accorded the BP brass in London in order to understand that the resulting lawsuits and the political pressure threaten America's access to energy it needs. The greens love that, and they intend to make the most of it.

The biggest of many lawsuits expected in the next several years will likely come from the government. Beyond that, environmental trial lawyers who sustain themselves with legal action on behalf of every obscure desert rat will not miss the awards to be meted out for the ecological damage done in the worst oil spill in America's history.

It won't stop there. The fishermen and thousands of small businesses wiped out because of the disaster will also want to be made whole. Wouldn't you? The families of the workers killed in the April 20 fire and explosion will not retreat into the shadows. Their likely legal action will be one of many avenues by which authorities will attempt to determine why the blowout preventer intended to block the release of the crude failed to activate. 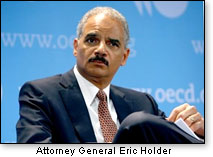 Fear not  Holder's posse will save you!

President Obama sent Attorney General Eric Holder down to the Gulf this past week to assess the damage and lay the groundwork for possible criminal and civil action.

This well-publicized event is intended to quell the frustrated shouts of "Don't just stand there  do something." Even NPR's Juan Williams  who doubles as a Fox News in-house liberal  observed, "This is an administration that, as Hillary Clinton famously pointed out, you may not want to have answer the 3AM call."

Still there are the rude amongst us prepared to observe that even with Mr. Holder and his swarm of lawyers arriving on the scene, the nearly-50-day gusher remains at full tilt. The AG's team may provide the president a photo-op.

Mr. Obama has also imposed a 6-month delay in new permits for deepwater drilling. That's a big help. Sure, the oil companies will say, "OK, we'll knock off for 6 months." Right. More likely they will head for friendlier shores.

Alas, he is but of human flesh

Here it is for all to see  right out there in plain sight  exactly what Sarah Palin meant when she said her executive experience as mayor (and later governor) was "a little like being a community organizer  except that you have real responsibilities." 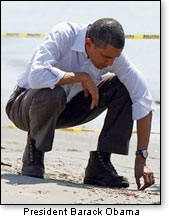 The barb at then-candidate Obama could apply today as revealing  alas  that he is unable as president to make the "oceans recede" and the "planet heal," as he promised a frenzied partisan crowd during the 2008 presidential campaign.

He comes off as uncaring, incompetent, and not to be deterred from serious policy visits to Barbara Boxer's fundraiser, to the basketball courts, and to the golf course (where  coincidentally  O.J. Simpson was previously seen looking for "the real killer").

The feckless non-policy pursuits of a president (who  in his quest for the highest office in the land  couldn't speechify enough about President Bush's failure with Hurricane Katrina) will have serious consequences for all of us  far beyond paying through the nose at the pump.

The oil spill and the accompanying pictures of its damage may engender a public reaction against oil exploration not unlike the 1979 revulsion against badly needed nuclear power after the Three-Mile Island disaster.

There is no political capital to be sacrificed for railing at a huge oil company. That's easy  even for a president who took nearly one million dollars in campaign money from the same oilmen.

Which gets us back to the public relations blowback from this disaster which is likely to result in turning the tide against all offshore drilling. Never mind that it was the lawyers, the "environmental" lobby, and political pressure of the greatest magnitude that sent the oil firms scurrying farther out where the far deeper ocean waters make exploration all the more difficult and risky. The future of our attaining anything approaching energy security is all the more remote. That is the bottom-line danger, and it overrides all else.

Here is the way independent market analyst Gregory Lemaire Smith sees it: "The U.S. is struggling with a stifling oil import dependency, which demands increased domestic production." The Datamonitor associate energy specialist adds: "The U.S. has been extremely frugal in allowing development of its offshore regions in the past, so the recent opening of some of these regions was a welcome relief. Nevertheless, this disaster prompted a predictable response from California governor Arnold Schwarzenegger, who has now confirmed that the state will not be pursuing any offshore plans." Comment: And that's just the beginning. 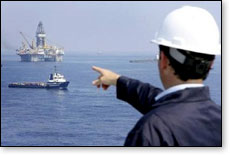 Datamonitor cites "the production and trade forecasts for the US' key suppliers, and highlights their poor correlation with US demand growth. The picture is not ideal for a country whose energy security is already weak. It will be even worse if drilling in the Gulf is delayed or banned as an estimated 76 million barrels per day were due to be extracted in 2013 from approximately 40 new fields."

America's back against the wall?

Let's connect all these dots. The picture is not pretty, but we should face it so that hopefully we can avoid dire consequences that appear to be in store:

We are already far too dependent on energy from parts of the world whose leaders and enabling terrorists hate our guts. We need oil. We need coal. We need natural gas. We need nuclear power. All four are under assault.

Oil exploration is directly threatened by this huge new disaster. President Obama has gleefully spoken of running the coal companies out of business, even though America is the "Saudi Arabia of coal." Natural gas faces bureaucratic delays. Nuclear power, as mentioned above, has never fully recovered  in this country  from Three-Mile-Island  although other countries depend on nuclear power for a large slice of their energy needs and are none the worse for it.

We could talk about grandiose plans for wind and solar, but this column is for adults.

If one were of a conspiratorial frame of mind, it would not be hard to fathom a deliberate effort to deprive us of the energy independence required to keep us beyond the reach of those whose desire is to tear America down.