Wes Vernon
Kagan: another "ruling class" slap in the face to the American majority

June 28, 2010
Supreme Court nominee Elena Kagan is right out of central casting as a stereotypical example of America's "ruling class"  i.e., out of step with the great majority of Americans, but with a sense of entitlement to wield power in such a way as to make policy against our wishes because we are her inferiors. 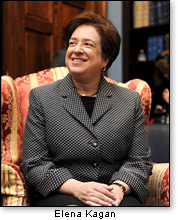 Coincidental it is (or perhaps not, it doesn't matter) that on the eve of Kagan's confirmation hearings to become America's 112th Supreme Court Justice, the July-August issue of American Spectator magazine should include an article titled The Ruling Class. Written by Angelo M. Codevilla, the long essay (which hopefully at some point will become a full-length book) describes a power movement that tilts left in its politics, as well as toward a secularist culture that  in adding up its factions  commands a philosophical agreement from no more than one-third of the electorate.

Codevilla pinpoints all the requirements for advancement among the elite, including (but not confined to) "being in with the right people, giving signs that one is on the right side, and joining in despising the Outs."

Also, a certain amount of corner-cutting is required, or a willingness "to accommodate the interests of [the ruling class's] senior members," in which case "he [or she] can move profitably among [the] establishment's parts."

Then Codevilla cites a timely illustration:

"If for example, you are Laurence Tribe in 1984, Harvard professor, leftist pillar of the establishment, you can 'write' your magnum opus by using the products of your student assistants Ron Klain and Barack Obama. A decade later, after Klain admits to having written some parts of the book, and the other parts are found to be verbatim of paraphrases of a book published in 1974, you can claim (perhaps correctly) that your plagiarism was 'inadvertent,' and you can count on the Law School's dean, Elena Kagan, to appoint a committee including former and future Harvard president Derek Bok that issues a secret report that 'closes' the incident. Incidentally, Obama ends up as president and Kagan a justice of the Supreme Court."

So Codevilla's point is that "[n]ot one of these people did their jobs: the professor did not write the book himself, the assistant plagiarized instead of researching, the dean and the committee did not hold the professor accountable, and all ended up by being rewarded." Cute, no?

And so the beat goes on

This week, the next chapter in the script is being staged to play itself out as Elena Kagan (already rewarded with the powerful Solicitor General position) faces her confirmation hearings before the Senate Judiciary Committee. If confirmed, she will be able to occupy that lofty position for life  40-50 years, who knows? She is unqualified for the job, for these reasons 

1  Elena Kagan has no background either as a judge or a trial lawyer. As Congressman Ted Poe  a former judge and currently a member of the House judiciary Committee  has pointed out, the Supreme Court is no place for on-the-job training.

2  In her Princeton thesis, she expressed her dismay that,"[i]n our own times, a coherent socialist movement is nowhere to be found in the United States." Further, she contrasted capitalism's "golden past" with "socialism's greatness."

Law professor to the rescue?

3  Dean Kagan effectively banned military recruiters from the Harvard campus just because of her personal pique on the so-called "Don't Ask, Don't Tell" law regarding gays in the military. So because she doesn't like a law, we should deny our military the means to acquire the strength to protect us? As Elaine Donnelly, President of the Center for Military Readiness, put it, Senators "should question" Kagan's "flawed logic and anti-military attitude by signing an amicus brief challenging the Solomon Amendment." Donnelly noted that "the U.S. Supreme Court upheld the constitutionality of the legislation which protects equal access for recruiters on college campuses, with a unanimous 8-0 vote. Even Justice Ruth Bader Ginsburg did not agree with Kagan's anti-military views." Kagan trashed the military in time of war.

Bulletin to Kagan: When enemy/terrorist bombers threaten your safety or your life  call a Harvard law professor.

4  As a legal adviser to President Clinton, Kagan advised him to veto legislation banning partial-birth abortion  a butcher procedure the late Senator Daniel Patrick Moynihan described as "infanticide." In so doing, she deliberately withheld from the president professionally authoritative information that partial birth abortion is never "the least risky, let alone the 'necessary' approach."

5  Elena Kagan is an enemy of free speech. In her current role as Solicitor General, she directed the effort to ban free speech on the part of entities desiring to issue pamphlets, posters, or internet postings backing or opposing candidates for public office during campaign seasons. The court rejected her argument 5-4. Now the Stalinist bullies on Capitol Hill are crafting legislation to undo it. 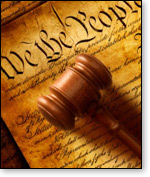 6  The woman who aspires to a position where no one (in a public policy sense) can sass her back for the rest of her life also has spoken in Orwellian code language for shutting up those whose views she doesn't like. Her euphemism is "redistribution of speech."

Elena Kagan has all kinds of peeves with that pesky Constitution. She has no more respect for the Second Amendment than she has for the First.

7  The Committee for Justice has painstakingly documented the nominee's hostility to gun owners' rights on a variety of issues wherein she comes down on the side of the tightest gun control every time.

8  Madame Kagan would force states to recognize "marriages" in other states even though a state's own policies are different  a backdoor effort to force same-sex marriage on the states whose voters  through ballot initiatives  have deemed otherwise. 31 states  mostly by ballot initiatives  have rejected same-sex marriage. Oh, those bothersome voters.

That adds the Tenth (state's rights) amendment to her list of pet peeves. But then if she doesn't respect the First and Second amendments in the Bill of Rights, why would we expect her to respect the Tenth?

Or any other part of the Constitution

9  Speaking of which: As this column reported (see "Kagan: Disrespect for the Constitution?"  5/24/10) Elena Kagan as Dean of Harvard Law downgraded the study of American constitutional law and upgraded international law. Do we see a pattern here?

10  Her judicial hero is former Israeli Justice Aharon Barak, who has said judges should feel free to "give a statute new meaning"  i.e., legislate from the bench.

If the Kagan record concerns you, here is a list of Republican senators who need to hear from you. (Bond-Mo., Collins-Me., Graham-S.C., Lugar-Ind., Martinez-Fla., Snowe-Me., Voinovich-Oh., Brown, Mass.) These senators have either said they might vote for Kagan, voted to confirm her as Solicitor-General, or refused to make their views clear.

The list may not be complete, but was the best our research could produce. We need a solid Republican opposition so no one doubts who Elena Kagan is  an enthusiastic agent of the minority left-wing "ruling class" that presumes to force its will on the "country party"  Codevilla's term for those of us who (according to the elites) just don't know what's good for us.