November 4, 2010
As of late Wednesday — with just a few close races yet to be settled — the Republicans stood to make a net gain of as many as 67 seats in the House of Representatives — "the people's House." 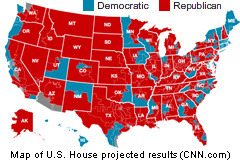 At one point, a GOP vote-tracker told me the count was 83 new Republican members in the House for a net gain of 64.

To exceed that in the lifetime of almost anyone alive, you would have to cite 97 Democrat gains in 1932 (with the Roosevelt landslide); 80 Republicans in 1938 (after FDR misinterpreted his 46-state landslide in '36 by trying to pack the Supreme Court in '37); or 75 Democrats in 1948 (in support of Harry Truman's upset). Even the GOP's big post-war "Had enough?" gain of 56 Republicans in 1946 didn't match what today's Republicans have won in 2010.

The GOP also scored some spectacular victories in the Senate while — as expected — they failed to gain outright control.

The victories of such ardent reformers as Rand Paul in Kentucky; Ron Johnson in Wisconsin (especially gratifying since he defeated incumbent Dem Russ Feingold of the infamous anti-speech McCain-Feingold act); Mike Lee in Utah; Marco Rubio in Florida (very significant given that the White House tried to derail him precisely because he is seen as a rising star); Senator-elect Pat Toomey (who scored a victory in Pennsylvania that is exhilarating in the extreme when one considers that only a short while ago, the Keystone state (and the whole Northeast) had been all but given up as lost. 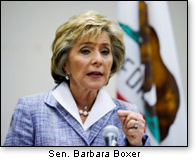 This column is obviously disappointed at the failure to defeat Barbara Boxer in California and Majority Leader Harry Reid in Nevada. However, they may yet be marginalized.

In 2012, 23 of the Senate's 33 seats to be contested are now occupied by Democrats — meaning they have more to lose. That improves Republican prospects for taking control of the Senate then. In which case, Reid becomes Senate Minority Leader, and Boxer is dumped from her disastrous chairmanship of the Senate Committee on Environment and Public Works.

There is little doubt — given the general trend — that if all 100 Senate seats had been contested this year, the Republicans — led by Tea Party-backed candidates — would have taken that body too. As it is, only one-third of the senate is up every two years. However, the GOP gained at least 6 seats Tuesday, thus smashing the Democrats' 60-vote filibuster-proof dominance

At least 40 percent of all voters were Tea partiers or Tea Party supporters. That percentage registered much higher when only Republican voters are counted.

Notwithstanding that the Tea Party rescued the Republicans from the dustbin of history to which voters appeared to have consigned them two years ago, some of their candidates got precious little help from the Republican Party. Of special note are Sharron Angle who took on Reid and Christine O'Donnell who put up the good fight but was all but abandoned after she defeated establishment candidate Mike Castle in the Delaware GOP primary.

That is a lesson for principled conservatives when it comes time to allocate their campaign contributions: Ignore the party apparatus and be selective in giving to candidates worthy of your backing.

Harry Reid can thank the thugocracy for his come-from-behind position. One does not go from being down by four, as Reid was, the day before the election and end up by six on Election Day without a ground operation second to none.

Harrah's — a big casino operator in Vegas — pulled out all the stops by hectoring and reportedly intimidating their employees to vote for Senator Reid. One Fox anchor described the practice as apparently "legal, but icky." A complaint of "strong-arm tactics" has been filed with the U.S. Department of Justice. A separate investigation apparently is underway to determine if it was in fact illegal and icky. None of this will undo the election results, but if someone has transgressed the law, he or they should not be allowed to get away with it.

And on down the ticket

As of Wednesday afternoon, it was reported that of the 99 state legislative chambers, 55 had been captured by the Republicans. The GOP hasn't scored that well since the 1920s.

But will this last?

Politics can turn on the proverbial dime, especially in this age of the 24/7 news cycle. Obama, who (figuratively) could walk on water just two short years ago, now acknowledges his party has taken a "shellacking." His own policies played no small part in that.

As disgusted as Middle America is with the Democrats, they are not necessarily enthralled with the Republicans — but are willing to give them one more chance. Senator Jim DeMint — a hero to conservatives — has warned the Capitol Hill newbies not to allow themselves to "co-opted" by the Washington establishment and to remember why they were sent here.

This column attempted to get an answer from the Tea Partiers as to how much time they were willing to give the new lawmakers to fulfill their promises before they seek to kick them out of office, too. The Tea Party movement is so grassroots and leaderless that finding any one person willing to give a definitive answer on that is next to impossible.

Presumptive House Speaker John Boehner came closest when he said election night that he and his colleagues will postpone their celebrating until the day when small businesses start hiring again. Meanwhile, America is closely following such issues as jobs, taxes, the debt, and the threat to the value of the dollar. No longer will Americans go away and assume all is well. The tough battle lies ahead.