Wes Vernon
The congressional probe of Islamofascism - a suggested agenda

January 10, 2011
Anyone who's watched Congressman Peter King on TV knows that he is fearless. The self-appointed gatekeepers of "political correctness" don't scare him.

Actually, he scares them. And that's why — even before the New York Republican (Long Island) has been able to assemble a full staff of investigators and researchers — they are already piling on merely for his plans to hold congressional hearings on Islamofascism. Is radical Islam inserting itself into our society by sowing discord and fear, as well as through infiltration, "political correctness," threats, and violence? 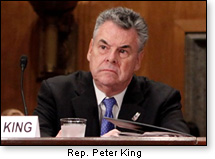 So as Chairman King prepares his House Committee on Homeland Security (HCHS) for the inquiry, we have some suggestions as to what topics might be explored. He is going to rattle some cages no matter what he does, so he might just as well go full bore.

Nearly ten years after the attacks of 9/11, the enemy is making progress in its ongoing effort to lull as back to sleep.

Our leaders dare not use the term Islamofascism. Even War on Terror has become verboten. So the committee's hearings should be predicated on the understanding that we do have an enemy. That enemy is making war on us.

Most Americans abhor war. Who doesn't? Put it this way: Though Leon Trotsky was an evil man (who was murdered on the orders of an even more evil man, Stalin), he got one thing right when he said, "You may not be interested in war, but war may be interested in you." Indeed. And much of today's war (in which our fervent enemy is deeply "interested") is being waged right here on our own soil.

As David Rubin opines in his book Islamic Tsunami, Islamofascism is a far more dangerous enemy than either Nazism or Communism. This time, our enemy is a death-worshipping, blood-soaked, suicide-honoring ideology masquerading under the cover of "religion."

Ideas for the probe

Arab-American Christian scholar Dr. Anis Shorrosh has listed many facets of this war and how the enemy is destroying the ability of the U.S. and its people to resist the onslaught. Here are some of them: 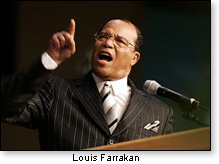 1 — Weaken and ultimately bring about an end to freedom of speech through "hate crime" legislation — state and federal.

2 — Wage a war of words — using the likes of Louis Farrakan — to promulgate the idea that Islam is the original African-American faith, while Christianity is for whites (an ambitious plan whose aim is to tear down the deep Christian religiosity of many black Americans).

3 — Promote in every possible corner of the public square the idea that Islam is just another religion like Judaism and Christianity.

4 — Encourage Muslims and Muslim sympathizers to run for public office.

5 — Infiltrate and ultimately control the media — Hollywood, radio, TV, etc. (Here, they have staunch allies in the secular left, the dominant Hollywood culture.)

6 — Yell "Bigot!" and smear any American who quotes the damning passages of the Koran.

7 — Encourage Muslims to penetrate the White House, acquire positions in government, and gain membership on local school boards. (Bogus "history" as written by Communist liar Howard Zinn — for example — is widely used in schools, and would aid the Islamofascist effort to destroy the faith of our young people in their country, the Founding Fathers, and the Constitution.)

8 — Accelerate Muslim demographic growth through A) massive immigration (the FBI says many illegals crashing our southern border are from the Middle East, having learned enough Spanish to mingle with Hispanics); B) having Muslim men marry American women, then divorce them and re-marry every five years; and C) converting angry, alienated black prison inmates and turn them into militants (hundreds of such inmates have joined al-Qaeda).

9 — Push for literature in the American educational system that is sprinkled with dislike for Jews, Christians, and democracy.

11 — When the finger-pointing starts after a terrorist attack, always claim that terrorists have hijacked Islam, even though the truth is that Islam hijacked the terrorists. 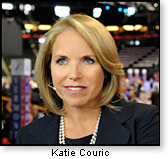 12 — Appeal to historically compassionate and sensitive Americans for sympathy and tolerance toward Muslims in America, portraying Muslims as immigrants from oppressed countries. (Here, TV anchorwoman Katie Couric generously provided us a prime example with her ditzy call for an Islamic version of the TV program The Cosby Show. Fred Grandy — formerly "Gopher" on TV's The Love Boat — solicited ideas from listeners to his morning radio show on WMAL-AM in Washington for a title to Katie's would-be sitcom. Among the ideas were I Dream of Jihad, How I Met Your Mullah, and Martyred with Children.)

13 — Nullify America's sense of security by manipulating the intelligence community with misinformation of possible "imminent attacks," possibly leaving them unprepared (by repeated cries of "Wolf!") for a real one. (One recalls Daniel Pipes, director of the Middle East Forum, who wrote, "Over and over again, branches of the American government have been embarrassed by their blindness to jihadist Islam.")

14 — Form riots in the prison system.

15 — Open "charities" throughout the U.S., but use the funds to support Islamic terrorism with American dollars.

16 — Raise interest in Islam on American campuses by insisting that every freshman take at least one course in Islam.

And that's not all

Repeatedly, Americans who speak out are confronted with those carrying water for yet another strategy on the Muslim agenda: Try to intimidate the outspoken individuals who criticize Islam. (At the same time, Muslims in the U.S. who would be quite willing to assimilate into American culture dare not raise their voices in protest against violent jihad lest they too become victims of it, rendering them ineffective.)

Rubin — in Islamic Tsunami — alludes to the "shocking anti-democratic anti-First Amendment silencing of those who dare to issue a warning threat," and adds that "Islamic big brother is aided by pagan leftists."

Back to the committee

Congressman King's committee reportedly will probe the ongoing effort to insert Islam's "Sharia law" into American jurisprudence, just as Islamofascists have taken successful steps in that direction in some European countries.

A note of irony: As noted above, radical Islamists are allied with and/or defended by a far left that often poses as the ultimate protector of women (read activist "feminists") and homosexuals. In hard-boiled Islamic societies, women are stoned for adultery and homosexuals are executed. That is how "Sharia Law" is interpreted in countries where they rule. So what unites radical Islam and the secular left, if not a common disdain for America?

Chairman Peter King and his committee may want to determine to what extent America is being targeted by Islam to submit or die.

The Communist Party, during the Soviet era, advocated the violent overthrow of the U.S. government. Adherents of Islamofascism will not hesitate to kill — or overthrow — governments if the non-Muslim world does not convert. But they are quite content to obliterate our Constitution through "peaceful" means (legal and illegal), while not ruling out violence.

The bottom-line question before the committee will be: To what extent would an Islamofascist takeover leave our representative republic in the kind of shambles that would have been the case if the Soviet underground in the Cold War had succeeded in overthrowing the government? The King committee will need to connect some sensitive dots. 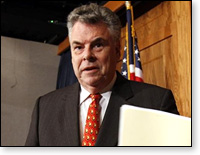 Let's hope Mr. King holds firm. The smear-bucket brigade will be out in force before he raps the first gavel. Other congressional figures from previous generations — Martin Dies, Francis Walter, Pat McCarran, Bill Jenner, Harold Velde, Tom Dodd, Richard Ichord — and yes, even Joe McCarthy — likely had a relatively easy time of it compared to what today's liberal establishment is prepared to inflict on the tough Long Islander.

His findings may lead to a public demand for a long-overdue separate House committee to conduct — fulltime — investigations of subversive activities in the United States. That would logically mean a revival of the House Committee on Internal Security.