Wes Vernon
Rupert Murdoch and the media wars: so what else is new?

July 25, 2011
"I think he's trying to destroy The New York Times," a newspaper editor opined to me shortly after worldwide media mogul Rupert Murdoch had acquired and poured money into upgrading The Wall Street Journal (WSJ).

Months later, I asked a Murdoch employee about that. Unsurprisingly, that person declined to comment.

As an unflinching supporter of the First Amendment and press freedoms, this column would not want to shut up Pinch Sulzberger's New York Times. However, the public would not be harmed if that establishment pillar were to morph into its more natural state — as an elite subscription-only newsletter for a Park Avenue/faculty lounge clientele.

Regardless of whether Murdoch is focused on wiping out the "Gray Lady," the latter is obviously convinced that such a plot is afoot, and therefore is using a scandal (one involving a Murdoch-owned paper in London) to strike back at the 21st century newspaper icon.

In recent days, if you picked up a copy of the NYT that — presumably with a straight face — boasts of presenting "all the news that's fit to print" — you were likely to confront all-Murdoch all the time. Start with a front-page story about the 80-year-old publisher and his son appearing before a British parliamentary committee and queried as to what they did or did not know about the years-old phone-hacking scandal that has swept Britain. (Murdoch's 168-year News of the World was shuttered because of the blowup.)

Though the phone-hacking so far has been confined only to that one publication, the NYT is likely to accompany its front-pager with two or three sidebars, an editorial, and perhaps a couple of columnist hit pieces on the same theme.

All of this would be spiced up with "questions" as to whether the British residue is seeping into "other" Murdoch-owned properties such as (hint-hint) U.S.-based Fox News and WSJ (the latter with overseas editions, as well). There is not the slightest evidence or indication that either has been affected. (In fact it would appear the secondary fallout in this drama has centered in Britain's Cameron government, in part because the prime minister hired a former News of the World editor.)

The NYT's self-righteous pose is striking, given its embrace of and propagandizing for the likes of the WikiLeaks security-breaching Julian Assange, not to mention that the Times — by outing CIA operations post 9/11 — turned itself into a virtual terrorist tip sheet.

Most of the liberal media needs no prompting for the glee with which to pounce on Murdoch and Fox News. In fact, some see the latter as the primary reason the travails of Murdoch's News Corp. get a disproportionate amount of ink and air time in the United States.

As viewed by the mainstream media, the very fact that one popular cable news channel has played a leading role in the crackup of the liberal monopoly is in and of itself an obscenity, if not a crime. (My only significant worry about Fox is that someday Mr. Murdoch's more leftward son will likely be poised to take the reins. But that's for the future.)

Before Fox News and the "new media," considerable damage to the public interest was inflicted by the one-dimensional discussion that prevailed in the public square because 1 — the big three TV networks were (and still are) anchored on the same island (Manhattan) as the Times and often followed its lead in framing their then-uncontradicted evening news shows; and 2 — the Gray Lady has peddled its product to newspapers in Middle America, as many editors and reporters in "fruited plain" newsrooms got their training from professors who trot out the NYT as the journalistic bible.

The result of all this was a de facto political information cartel.

How the cartel evolved

There was an earlier era when the streets of New York and other major cities were chockablock with the competing voices of newspaper boys shouting the blaring headlines — sometimes exceeding one inch in height — imploring anyone within earshot to "Get your paper here!"

In their own way, those street vendor kids symbolized the fierce competition that provided a framework for journalistic intellectual diversity.

The newspaper moguls of those days — Hearst, Pulitzer (and his heirs), Scripps-Howard, Knight-Ridder, McCormack/Patterson, and the Chandlers — all eagerly sought to best each other for reader loyalties.

In the mid-20th century, for example, New Yorkers seeking serious political information could take their pick between the Democrat-leaning Times or Ogden Reid's ("moderate") Republican-favoring Herald-Tribune (tracing some of its lineage to Horace Greeley). If neither met the demands of conservative tastes, other options were available — i.e., the New York Sun, Hearst's Journal-American, or Patterson's New York Daily News.

Ultimately — through a series of mergers and second-generation takeovers — most of the more conservative papers ultimately disappeared or changed sides in the intellectual wars.

Radio, in the heyday of its broadcast dominance — late twenties to early fifties — featured such conservative commentators as Upton Close, Henry J. Taylor, and Fulton Lewis, Jr. Of these, only Lewis survived for the long run. Boake Carter's sharp criticisms of the New Deal on CBS reportedly were deemed "too hot to handle." Ultimately, he was replaced by Edward R. Murrow.

Then there was television

By the time television arrived, most of the decision-making in broadcast news — either for economic or philosophical reasons (likely a mix) — was generally liberal.

The end result was that the shrinking newspaper market was consensus-driven and played it "safe" — as surveys showed the overwhelming majority of editors and reporters were liberal or liberal-leaning.

Added to that was the huge impact of television, which at the network level generally hewed to establishment assumptions, with ABC, NBC, and CBS evening newscasts virtual carbon copies of each other.

Then came the skunks at the garden party

That "consensus" in what Americans were to read and hear began to crumble 1 — in the late eighties when the government-imposed "Fairness Doctrine" was struck down, giving birth to conservative talk radio; 2 — in the nineties when cable was added to the television milieu, and 3 — in the late nineties/early 2000s when the internet entered the scene, making it possible for conservative websites, including this one, to make themselves available worldwide.

There are many good men and women in this morality play for free and open debate (as opposed to the preceding 40 years of a think-alike mentality).

If one were to pick three public figures widely viewed as symbols of the information breakthrough, they might well be Rush Limbaugh for talk radio, Matt Drudge for the conservative internet outlets, and Rupert Murdoch for conservative television and newspapering.

That is why Murdoch is under extreme fire in this country for the demise of one now-defunct property in Britain — where sensationalist journalism is far more widely accepted than on these shores. (In the U.S., the Murdoch property closest to the British style is the New York Post, and that tabloid is very mild compared to London's Fleet Street newspapering.) 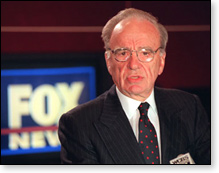 So when we read, hear, or see the old mainstream U.S. media going after Murdoch, we can consider the overriding motive likely related less to true moral outrage than an attempt to take down someone who backs the conservative pushback with his resources and makes more money in the bargain.

When Rupert Murdoch created Fox News, he was doing what any smart businessman does: he filled a void that the competition was too tone-deaf to recognize — the existence of TV news that tells both sides of the news and adds conservative commentary previously missing on the tube.

Forget for the moment your own reservations about Murdoch, and some conservatives have had a few. One assumes that a multi-billionaire can take care of himself, and will no doubt do well whatever happens. It is not the fortunes of the man himself that we're talking about here. It is what he represents and is in a position to maintain.

That is why establishment voices are trying to derail the empire he has built. He broke up their think-alike monopoly party. They long for the "good old days," and if they can just get the Obama gang past the 2012 election, they intend to use the tools of government to put the impudent genie (as they view it) back in the bottle.

This is but one (albeit pivotal) chapter in the decades-long media wars.