Wes Vernon
What would you do differently from Obama (if you wanted to bring America down)?

December 12, 2011
The Occupy Wall Street (OWS) crowd (with White House ties) is the natural outgrowth of several generations of classroom Marxist indoctrination. Foremost has been the hate-America "history" taught in writings of the late Communist Party member Howard Zinn.

OWS parrots the communist line to the dotted i and crossed t. A revisit to a basic civics lesson therefore is in order. The reader is asked to consider: If you were a Marxist revolutionary or committed socialist, and you wanted to destroy America from within by stealth and in carefully planned steps, what is President Obama doing that you would not do? 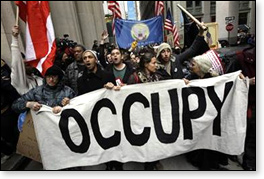 The OWS battle cry is "the [top] 1 percent vs. the 99 percent [the rest of us]." President Obama has said to the occupiers, "We are on their side," and addressing them directly, he added, "You are the reason I ran for office."

And why shouldn't OWS and the current White House occupant not be in sync? He preaches class hatred all the time, most notably in his Kansas speech this past week wherein he all but declared total political war on the United States, especially its job-creators.

The Marxist view of the world is that if someone has more in worldly goods than you do, it means he is robbing you of what is rightfully your "fair share." And ergo, the "inequality" in and of itself has led to the "lousy economy" (in Bill Clinton's words).

The naïve brainwashed, along with those who know what they are doing, preach class hatred as political gospel. To them, there is a direct correlation between financial "equality" and freedom. In reality, there is no cause and effect there whatsoever.

Lesson 1 — Wealth is not created by government. Lesson 2 — In order for wealth to be created, (duh!) some people hire other people. And, yes — Lesson 3 — Absent incentive to hire along with adequate capital to invest, monetary equality ("level playing field?") can be attained only when all of us are equally poor and equally miserable.

Lesson 4 — Brace yourselves for this one: Material security is not a "civil right."

Let's suppose government confiscated every penny owned by the "top 1 percent." Would the Marxist preachers of class hatred be satisfied? Likely they would be rubbing their hands as they gleefully vilify the new "top 1 percent." Thus, the spiral continues downward until we are all equally poor and equally miserable.

At that point, an all-powerful government, in a performance intended to infer the process of "riding to the rescue," offers or imposes a takeover. That old slippery slope has been repeated with disastrous results, but the credulous fall for it every time. The end result has either been bankruptcy — currently a dangerous possibility facing the U.S. — or in some cases the ultimate result — the Holocaust or the Gulag.

Of course President Obama supports the OWS revolutionaries (including their affiliates nationwide). They are his shock troops. Investigative reporter Aaron Klein has traced the connection, noting for example that an adviser to the president — Leo Gerard — has called for "more militancy" in Occupy movements nationwide. Gerard serves on several groups funded by left-wing Obama-promoting moneybags George Soros.

This line from the top of the government out to the streets follows the pattern advocated by the late Saul Alinsky, a community organizer whose modus operandi influenced Barack Obama.

Alinsky advocated organized chaos to bring down the (free market) structure. The methodology, called "Cloward-Piven," crafted by a couple of radical university professors, has been defined as the strategy of "top down, bottom up, inside out."

In fact, the aging survivor of that professorial duo, Frances Fox Piven, has blessed the Occupy movement, declaring herself "so enthusiastic about the possibilities" for advancing her anti-capitalist agenda by taking the message "to the streets" (effecting policy through free elections apparently being totally foreign to her Marxist mind). 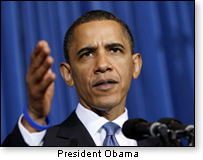 It is reasonable to ask, therefore: If this "taking to the streets" while their man is in the White House sets the tone for a future that could make the hateful sixties look mild by comparison, what does one suppose the manipulators of chaos envision for the future if in 2012 the American people see fit to reject Mr. Obama at the polls?

It is reasonable to speculate that in that event, they will instigate violence, blame mainstream conservatives for the violence, and with the clenched fist, use the slash and burn strategy to protest every cut — large or small — in any government program or any effort to deny government more power.

Never mind that federal entitlements now embedded in the statutes are on track to gobble up all revenue by 2049. (See Heritage Foundation study.) They don't care. The better to bring down our American system. These people are revolutionaries. Let our children/grandchildren worry about it.

Some clues as to the mindset are "out of the bag." A well-known actress calls for beheading the "rich" if they don't give up their wealth. A Democrat governor talks about canceling elections so the Obama agenda can move forward.

This column has raised the question as to whether we are witnessing an incipient Marxist revolution. We don't claim to know what goes on in President Obama's head beyond what he chooses to tell us. We know both his parents were pro-communist, that he was mentored in his youth by a card-carrying member of the Communist Party, that he was "educated" by "Marxist professors" (his words).

We know also that the Occupy movement which supports his policies from the streets and on which he has bestowed his good wishes, also enjoys the support of the Communist Party USA, the Socialist Party USA, and the American Nazi (National Socialist) Party (which apparently sees the viral anti-Semitism of the occupiers as music to its ears).

Again, without claiming to read the president's mind, it is reasonable to ask:

If you were a Marxist (of the red or pink meaning of that term) and you were President of the United States and perhaps convinced a la Howard Zinn that this nation (whose voters bestowed upon you their highest honor) was nonetheless a rotten country whose free market economy should be destroyed, what would you do differently than what President Obama has been doing?

Bear in mind, we are assuming you are smart enough to know that achieving your anti-American goals would have to be done by a measure of stealth until it's too late to reverse them.

So what would you do if you were President and you wanted to bring down your own country?

Would you make a grab to take over the healthcare system in the United States? (See Obamacare.)

Would you try to shut down the voice of your political opposition? (See FCC appointees and efforts to shut down conservative talk radio. See also effort to shut Fox News out of the White House pool. Josef Goebbels would be proud.)

Would you try to demonize the job creators...the so-called "rich?" (See pro-communist speech in Kansas this past week. More on that anon.)

Would you deny drilling permits to drill for oil in this country, thus making us a target for blackmail from oil-rich countries that hate us?

Would you "lead from behind" in the "Arab Spring" so the Muslim Brotherhood can take over, thus threatening stability in that oil-rich part of the world, and endangering our security?

Would you embolden the nuclear weapons-building cut-throats of Iran by failure to encourage their oppressed people to rebel, all the while cheering the anti-American Islamists on the streets of less threatening Arab countries?

Would you accept as the most frequent White House guest in the early months of your regime one Andy Stern of SEIU, who recently wrote an op-ed that we should emulate the economic system of Communist China (a form of "crony communism"?)

Would you push a program aimed at carrying out the proven-fraudulent job-destroying middle class-taxing program known as "climate change," or "global warming?"

Would you weaken our heretofore successful space program, thereby leaving meaningful space exploration in the future to the Chinese, and then compounding the damage with a nonsequitur about NASA "reaching out" to Muslims?

Finally, if you were President of the United States and intended to bring down your own country, would you stick the taxpayers with the bill for your flight on Air Force One to Osawatomie, Kansas, to declare that America's free market system "doesn't work" and never has? Lenin and Stalin could not have been more blunt.

All of these things and more represent an anti-American agenda and state of mind implemented or attempted by President Obama. If you wanted to bring this country down, is there any one of them you would do differently? I'm very curious to know.

Who knows whether the hard-core Marxists see Mr. Obama as the Alexander Kerensky of their hoped-for revolution? But that might be unfair — to Kerensky. After the Czars were toppled, he tried to steer Russia in a "democratic" direction before he himself was ousted by the hard-core Bolsheviks whose Soviet state terrorized the world for most of the 20th century. The hard-boiled socialists would have every reason to suspect that in Obama they may have the real thing.

Despotic socialist states have failed every time they have been tried. That would include National Socialism in Germany and Austria. The South Dakota Family Policy Council has presented the testimony of Kitty Werthmann, who in her youth, grew up under the Nazi regime of Adolf Hitler, followed by three years under Communism before immigrating to America.

Werthmann has testified that Hitler did not conquer by force. "He was eagerly welcomed by the people who voted him into office," she says, "because the Nazis promised free health care, retirement income, unemployment benefits, guaranteed wages, free nursery care, gun control." Sound familiar?

We Americans don't like to think that our own president is against us. But Barack Obama is not a stupid man, so we have to wonder if he doesn't understand very well the cumulative effect of his anti-America policies. The old analogy of the piano player in a house of ill repute totally unaware of what's going on upstairs hardly seems credible.