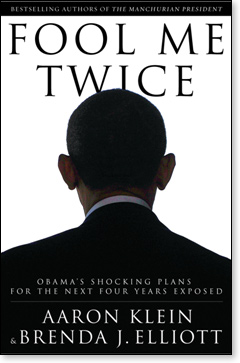 "This is my last election. After my election I'll have more flexibility."

That is an exact quote from the mouth of President Obama, unaware that the confidence (infamously shared with then-Russian President Dmitry Medvedev) was picked up by microphones and transmitted into America's living rooms, where millions of Americans heard the president's hushed tones.

Americans devoid of early-20th-century innocence might be content to shrug their shoulders and chuckle at another "oops" by a politician caught in the rushed flow of his own spilled beans. They need to check out "Fool Me Twice: Obama's Shocking Plans for the Next Four Years Exposed."

In the book, one finds the deeper meaning signified by that "Don't tell the children" mindset: This is his attitude regarding a long list of priorities he visualizes in a second term. They go far beyond a secret intent to placate a Russian tyrant such as Mr. Medvedev's de facto boss, Vladimir Putin.

Authors Aaron Klein and Brenda J. Elliott go behind the headlines and lay it all out: The hushed comment to Mr. Medvedev reflects what the president wants to do for/to his fellow Americans after the votes are counted — assuming, of course, that he wins, and even if he loses, who knows what kind of imposition he will be able to inflict in the lame-duck interim? What does he have to lose? He has "flexibility."

"Fool Me Twice" is the third in a series of works by Mr. Klein and Ms. Elliott wherein Ms. Elliott's research and Mr. Klein's shoe-leather investigative prowess combine to produce real journalism. (Their previous works were reviewed in this space.) No name-calling, no sensationalism, just the documented facts.

In fact, their refusal to jump to conclusions applies even in some instances where more connecting of the dots reasonably might have been sanctioned or forgiven.

In their first chapter, the authors refer to a recent 96-page report crafted by a coalition of liberal groups with deep ties to the Obama White House. Therein is a proposal to divert armed forces personnel from traditional duties so as to direct their attention to fighting "poverty, injustice, and global warming." Mr. Klein and Ms. Elliott omit any reference to a related comment Mr. Obama made during his first campaign for president in 2007. Here it is:

"We cannot continue to rely only on our military in order to achieve national security objectives that we have set. We've got to have a civilian national security force that's just as powerful, just as strong and just as well-funded." The military budget at that time was $534 billion.

There are conspicuous signs, according to this book, that the Obama administration is favorably disposed to scrap military buildup plans in order to meet a State Department request to send more aid to Egypt's new government, dominated by the Muslim Brotherhood and it's even more radical allies. 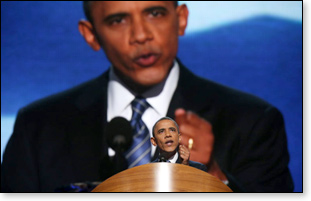 Also on tap are plans to re-create Franklin D. Roosevelt's New Deal Works Progress Administration (WPA) program, a massive new bureaucracy supposedly to create jobs, a scheme to "bolster the United Nations" and to implement a "single-payer" health care program fully controlled by the federal government. Obamacare, it seems is only the beginning.

Beyond outrageous is a massive "stealth amnesty" scheme, some of which already has been implemented since this book went to print, i.e., the unconstitutional executive order not to enforce the immigration laws on deportation of illegals other than those who are deemed to be a violent criminal threat to the rest of us.

The book cites immigration legislation crafted by the same ultraleft groups that have in the past originated many ideas for the Obama administration's serious programs. The 645-page bill had the original backing of 91 House members of the Congressional Progressive Caucus, an offshoot of the Democratic Socialists of America.

The disingenuous frame of mind that went into writing the legislation is breathtaking. The nine border communities along the U.S.-Mexican border would be required to warn citizens living in those areas (some of whom "may be involved in illicit actions") of border agents' plans in the neighborhood concerning the curtailment of smuggling.

Further, it would be illegal to apprehend an "undocumented" person near a child care provider, a school, a legal-services provider, a federal or state court proceeding, a cemetery, an administrative community, a college or university, a hospital, a health care clinic, a place of worship, a school bus stop, a recreation center, etc. The book lists more, but you get the idea. No more detaining of illegal aliens, period.

Perhaps the scariest chapter deals with high-powered plans to marginalize Middle America's say in our elections.

It comes as no surprise that the most common thread throughout the machinations exposed in "Fool Me Twice" is the recurrent name of George Soros, the powerful multibillionaire who wants to end America's system of governance.