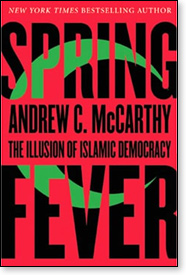 This is a scholarly work. When you read it, prepare to focus. It is a valuable reference source, a relatively thin volume of modest page count, but huge in the volume of information. If one undertakes the process of untangling all the propaganda bombarding the West (especially the United States) defining radical Islam as mainstream, clearly documented information is a must.

Andrew C. McCarthy has on-the-ground familiarity with the plot to destroy Western civilization and the freedoms enjoyed therein and replace them with anti-freedom, anti-American Shariah law. The plan would bring about radical transformation "from within" by stealth, infiltration or, if all else fails, violence and murder. Mr. McCarthy was the lead prosecutor in the pursuit of the terrorists involved in the first World Trade Center bombing, in 1993.

In that capacity, Mr. McCarthy made it his business to learn what caused Islamists to inflict suicide bombings against innocents, including children, who had done them no harm. He quickly concluded the very term "Islamic democracy" is a dangerous oxymoron. With all the "outreach" effort on the part of two American presidents, why does the Muslim world not understand America's good intentions? Answer: Jihadists understand goodwill very well. They just don't like us.

President George W. Bush and President Obama have tried to deal with the Islamist terrorist movement as if it were grounded strictly in religion rather than as the political supremacist ideology that it is.

Some advisers for Mr. Bush essentially saw what they wanted to see. The president eventually was prevented from using such politically incorrect terms as "Islamofascism" or even "terrorism."

It should not surprise readers that Mr. Obama's decision right from the start to double down on that approach was largely devoid of such naivete. Our 44th president had attended Islamist schools and was immersed in Islamic culture at a tender age.

Turkey at the dawn of the 21st century was still a bulwark of secularism largely as a result of an 80-year move away from the strictures of Islamist supremacism. In 2000, Turkey was a close friend of Israel and a friend of the West. "A dozen years later," Mr. McCarthy notes, "[Turkey] is an Islamist champion of both Islamic jihadists pledged to annihilate Israel and Sunni supremacists engaged in a self-described 'grand jihad' to destroy the West by sabotage."

That strategy, the author believes, lies partly at the doorstep of the cunning Turkish Prime Minister Recep Tayyip Erdogan, who became "fast friends" with President Barack Hussein Obama as the latter made Turkey his first foreign visit as our head of state. The two shared their experiences on everything from their Islamic-related backgrounds to how to raise daughters (they both have two, though Mr. Erdogan's are considerably older). 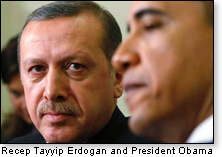 The Turkish leader's views on Shariah depend on his audience at a given moment. Similar allegations of doublespeak are often leveled against Mr. Obama by his domestic critics, especially during this election year.

Mr. Erdogan has sometimes supported and at other times eschewed Western-style democracy. Mr. Obama has pursued the goal of making Muslims "feel good about themselves" in connection with the space program.

As explained by Mr. McCarthy, Mr. Erdogan never loses sight of the goal of destroying the Western "infidels," as first enunciated by Hassan al Banna when he founded the Muslim Brotherhood in 1928 after World War I ended the Ottoman Empire.

We are told by "Spring Fever" that the author thinks that very title is a more accurate term for the current chaos in the Middle East than is Arab Spring. Furthermore, this book likens the term "Islamic democracy" to "a conceptual oxymoron." Metaphorically, electing a class president makes the third grade a "democracy," with the schoolyard bullies as "a political party."

As to how all of this translates into a significant threat, the following warning flows from Mr. McCarthy's pen:

"In Turkey, where a decade of Erdogan has gradually dismantled the 80-year secularization effort, only 34 percent of Turks [reject] Islamic law; a solid majority of 53 percent wants laws that at the very least reflect the primacy of Shariah principles, while 8 percent are 'calling for strict Shariah.'"

Shariah in the United States, once fully implemented (gradually, so as not to alarm us, a process already begun) would mean the end of America's constitutional protections. Women would be required to obey their husbands (no matter how outrageous the demand). Charges of rape would require multiple male witnesses. Adultery, homosexuality and conversion from Islam to another faith would be punishable by death.

Egypt's President Mohamed Morsi, a member of the Muslim Brotherhood, has urged that the United States release the "Blind Sheik," mastermind of the 1993 World Trade Center bombing. Mr. McCarthy is betting Americans will push back on that one as well as other affronts to American justice.