One despairs at the sight of 14 Republicans who voted for the Senate's Import More Democrats Act (an honest name for the "gang of eight" immigration bill), but I do have better things to do with my life than to stir up the already raging civil war within the Republican Party.

Some of my good colleagues come down quite hard on GOP leaders and even conservatives who cave or give a pass on social issues or principled political strategy (on and off Capitol Hill).

Not that I personally disagree with what these colleagues are saying about those on "our side" whom they regard as "sell-outs." I just find it more than a handful keeping up with the blatant lies, smears, and marginalization campaign by the "other side" to wipe the conservative point of view from the marketplace of ideas or to demean its adherents.

The time has come for this column, kicking and screaming, to call out one RINO (Republican in Name Only). We all know that the Washington Post historically has used all its influence to discredit conservatives; anti-communists (even liberal ones); those not convinced of Alger Hiss's innocence; social conservatives (the paper's ultimate bête noir; anyone who contributes to conservative causes; anyone whose proclivities do not encourage the liberal "mainstream," as decided, of course, by Post editors.

The Post has allowed a few conservatives to grace its op-ed pages (never its news columns), some for real, others arguably political chameleons. But its general direction is clear: The left – first, last, and all the time.

Having been in the free speech and freedom of the press business all of my adult life, I should stipulate that nothing said here is intended to abridge or silence any newspaper's right to take a stand. However, when any medium practices the game of Let's pretend, it invites a critique. 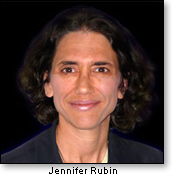 The Post in its column Right Turn might lead one to surmise that its editors supposedly are not so one-sided after all.

The columnist in question is Jennifer Rubin, who calls herself a Republican (well, OK, the party does claim the "big tent") and also a "conservative." The latter is questionable, but now Fox News affixed that label to her on a show where she was introduced as a "conservative" member of a TV panel.

Many RINOs appear to be people of good will (Senators Lamar Alexander and Mark Kirk come to mind), and you can accept or reject their views. They pursue their somewhat overly-soft agendas, but won't trash you if you disagree.

Perhaps the prize for sheer slander goes to a column she wrote about talk-show host Glenn Beck when he was with Fox. She accused him of bigotry because targets of his criticism were disproportionately of one ethnicity. 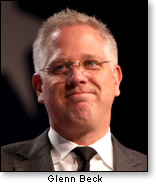 So Beck is supposed to apply an affirmative action policy in criticizing the deeds of individuals (not groups) who, in his opinion, have wielded negative influence in our society?

That same fake outrage was applied by Democrats in the nineties' "Gingrich Congress" when Democrat minority leaders who were objects of criticism in a fundraising Republican flyer were either black, Hispanic, female, gay, or Jewish. Never mind that the reason those Democrats were called out was that those particular individuals in Congress at the time happened to be – well – of those genders/races/ethnicities/lifestyle, none of which impugns their ethnic of racial backgrounds. In liberal-land, once a "minority" steps into the political arena, he/she must be shielded from criticism for all time and eternity. That trip-wired smear tells you something about which political movement sees everything – literally everything – through the prism of its "protected minority" classifications. That's the war cry: Tear us apart because of the category into which we were born. That "politics of ethnic identity" is Jim Crow in 21st century clothing.

But Right Turn took an unmistakably wrong turn when Ms. Rubin sounded the alarm for an all-out boycott – not just of Beck or his advertisers – already other critics were doing that. No, the column proceeded to urge a marginalization of anyone who dared to appear on Mr. Beck's then-Fox News show.

Translation: Don't exercise your right of free speech to express yourself at a forum of which I disapprove, or I will take to the smear bucket and damage your reputation for good. It is hard to understand how anyone who is given a platform for free expression would deny it to others. But that's the liberal mind. BTW, try to find that particular Right Turn column (several years old) on the internet now. It seems to have vanished from Ms. Rubin's website. Maybe there's a reason for that.

Ms. Rubin bade "Good Riddance to Jim DeMint" when that principled United States Senator (R-S.C.) opted to exit the Senate (to the chagrin of many of us) in order to head up the Heritage Foundation.

This is not hard to understand, and I'll spare you the specifics of Right Turn's name-calling. But it is well to remember that Senator DeMint likely aroused Right Turn's ire when he actually did something about the status quo of the day, which was that every serious conservative entering the U.S. Senate starts out on Day One with a bulls-eye affixed to his back by the liberal establishment at Georgetown cocktail parties, the media, and elsewhere. 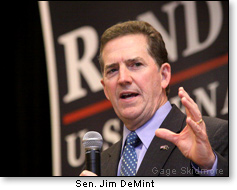 Senator DeMint's cardinal sin was going out and recruiting real conservatives to run against incumbent RINO Republicans in primaries back in their home states.

Tsk! Tsk! For shame. Didn't the South Carolinian "know his place?"; that his little cubby-hole was to be that of the humbled outlier? The oddball of the Senate who was supposed to be content with his "far right" views to be ridiculed by his "betters?" After all, Jesse Helms endured that at least until he attained the seniority to become Chairman of Senate Foreign Relations, where the establishmentarians had to pay attention to him, painful to them as it was. Jim DeMint just decided he wasn't going to wait around for thirty years. And he didn't. Today, thanks largely to him, the Senate has a cadre of conservatives mixing it up in "the world's most deliberative body."

Finally, Right Turn bestowed upon its editors an excuse to write the headline they have dreamed of for years, but dared not go quite that far with headlines over their own unsigned editorials: "Tear Down This Icon!"

Jennifer Rubin went after "the big enchilada." The Gipper" himself, no less. Finally, the in-house "conservative" said it out loud: Ronald Reagan was good in his day, but you know, that's all passé anymore.

Let's stop right there. Stop the music, Sam, and don't play it again! Remember the day a liberal columnist dared to write an equivalent plea to the tune of – let's say – "The only thing we have to fear is fear itself, and perhaps the New Deal and its sainted icon, Franklin Delano Roosevelt. He was OK in his day but his ideas of being nice to the Russians and spending our children's and grandchildren's seed corn just don't cut it anymore." Anybody remember that? Anyone? OK, I'll give you a few seconds to think.

The answer is liberals never explain anything. They just change the subject. Take for example the fact that every time the Republicans pull off a victory, the losers set about to lecturing the winners on how to behave. The very word "liberal" takes on a most unpleasant odor? No problem, we'll just reinvent the word "progressive." What? You say you thought FDR re-invented the word "liberal" as applied to left politics precisely because at that time (in the thirties) the word "progressive" had suffered because of ill repute in the early 20th century? Shut up and sing to the song book. 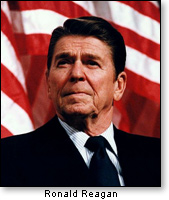 RINOs hated Reagan – even during his presidency when he delivered a prosperous era as described in Bob Bartley's Seven Fat Years (actually the results of "Reaganomics" lasted many more years beyond President Reagan's tenure in the White House). Further, the Gipper "won the Cold War without firing a shot," as Margaret Thatcher observed. That made it all the worse for leftists of whatever partisan stripe. They looked to the Soviets as a counterweight to their ultimate devil: American conservatives. Who cares about the greatest threats to world peace? Liberals have political campaigns to win!

It seems RINOs have little disagreement with Democrats on the perfect formula for GOP "victory": Copy the Democrats, who want to be defeated at the polls so badly that they are begging Republicans to adopt Democrat policies. Then they can be free at last! Free at last from those terrible reins of power that are burdening them so badly they can't wait for the Republicans to win the next election. Can't you see that? Stop me before I win more!

It's a free country (for now)

Now, would this column want to see the Post cancel Right Turn? Heavens, no! Other conservatives may urge the paper to "tear down this fig leaf" that poses as a conservative. But Jennifer Rubin has every right to be heard as long as an editor believes she has a following of sorts. That is quite different from her efforts to silence anyone who speaks his mind on a TV show that she doesn't like. All conservatives need to do is read her stuff and then apply their political efforts in the exact opposite political direction.

Perhaps that will aid the efforts of Senator Mike Lee (R-Utah), who seems to have picked up the DeMint operation of recruiting conservatives to run in primaries for the Senate.

Who knows? It might even stiffen the Republican Party spine to nominate something like a Cruz-Carson ticket in 2016. Ah! A Hispanic and an African-American on the (gasp!) Republican ticket. Every color-blind conservative's dream. Every liberal's nightmare. Delicious the thought.