May 13, 2014
No doubt an old parlor game in Washington will emerge now that Rep. Trey Gowdy (R-S.C.) has been assigned by House Speaker John Boehner to chair a special select committee to unravel the Benghazi scandal.

This time, the chattering class guessing game will raise the issue of who will toss the verbal grenade that starts the non-stop sliming of the second-term congressman from South Carolina. You have to believe the Democrat Party's ace opposition researchers are digging into Gowdy's background going all the way back to his crib days. And if they find nothing? Hey, no problem. Their smear buckets are loaded anyway. 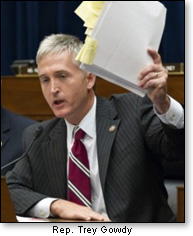 Secondly, how long will it take for President Obama to change the subject to focus public attention on anything but the special committee's investigation?

Ah! You could take office bets on that one. Will it be another thrilling episode in "The war on women" (in the United states, that is)?; "Minimum wage again"?; "We're all going to die" (climate change)?; "The top 1 percent"? Surely, there is some evil threat we can haul out of the closet to scare Americans into ignoring any information the Gowdy committee produces that reveals a betrayal and cover-up (Koch Brothers? Tea Party?).

Even before all the committee members were selected and before Mr. Gowdy has had a chance to wield the gavel for his first hearing, Democrats were threatening to boycott the proceeding. Some have had second thoughts on that one, rationally reasoning that (really?) if the committee GOP dialogue elicits only the public comments of Republicans, well – gosh, how are Democrats going to torpedo the committee work?

We all know, of course, that House Minority Leader Nancy Pelosi is a strong believer in "fairness." Stop laughing. She is! Surely, you recall that during the run-up to the House vote on Obamacare when Democrats were in the majority, then-Speaker Pelosi locked the Republicans out of a room during pivotal discussions on completing the government takeover of one sixth of the economy. Madam Speaker's retort to complaints on this or anything else in those dark days was a flat in-your face "We won the election."

Of late, she has protested that the now minority Democrats should call more of the shots on Gowdy's Benghazi panel. Let's assume the Republicans need not lie awake all night to come up with a smiling response. Repeat after me: "We won the election."

Judging by the men and women he has appointed to Gowdy's panel, Speaker Boehner apparently has concluded that this investigation requires serious analysis (as opposed to "bomb-throwing" showmanship).

That is not to say we can expect the GOP committee members to perform like "potted plants." Chairman Gowdy himself, for example, has demonstrated an ability to lead with a steel-trap mind that demands nothing short of pure fact. 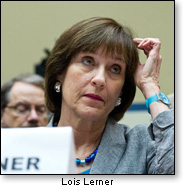 For example, Mr. Gowdy, whose 16 years as a prosecutor (on local, state, and federal levels) has wired him to a mindset that pursues a steadfast quest for straight answers to questions in investigations, regardless of how many times the issues are dodged, evaded, covered up, or disingenuously "explained away."

A more recent example that comes to mind is Gowdy's protest last year against letting Lois Lerner of the IRS get away with telling a committee that she did "not do anything wrong," and then refusing to testify under oath about her role in the IRS's singling out of conservatives for audit because of their politics, an outright violation of the law and the Constitution's free speech provision. If the South Carolina congressman had had his way, Congress would have decided that by denying all wrongdoing more or less in the abstract, she had waved her right to invoke the Fifth Amendment against self-incrimination and therefore should have been required to answer the committee's questions. You can be certain none of that slippery eel stuff will be tolerated in the new special Benghazi committee under Gowdy's chairmanship.

The problem, of course, is to what extent the Democrats deign to cooperate with the probe. Rarely does a party with nothing to hide attempt to sabotage an investigation. Be prepared for the deluge of claims that the GOP is "playing politics." Again, do we have two parties, or a grand coalition of one? Back to Civics 101 – i.e., our system is one of checks and balances. And no, nothing in the Constitution authorizes a president to upset that check on power simply because he has "a phone and a pen."

Gowdy was asked on Fox News Sunday how long his committee will need to complete its probe. The South Carolinian's response was that it depends on "how cooperative the other side would be." Translation: Back to you, Madam Minority Leader.

Former Virginia Governor Jim Gilmore believes that "to get the critical documents from the White House, the CIA, the Pentagon, and the State Department will take months." The governor (now President and CEO of the Free Congress Foundation) adds that if the expected foot-dragging from the executive branch materializes, "Mr. Gowdy will have to use all of the instigative powers of the House to get those documents, and get them he must because without them, uncooperative witnesses can't be faced without their own paper trails." 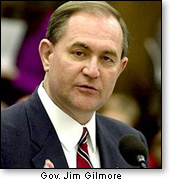 Governor Gilmore indicates he would not be surprised if the committee probe continues through the mid-term elections of 2014 and possibly right up to the 2016 presidential contest.

If Chairman Gowdy does not get the cooperation he seeks, consider the long parade of unanswered questions – as outlined in Monday's Washington Times – by Robert N. Tracci, who had an extensive legal career on Capitol Hill and the Justice Department.

The questions to be answered, according to Tracci, include, but are by no means limited to, the following: 1  The nature of intelligence and communications concerning threats prior to the attack; 2  Whether U.S. support for armed Libyans had any bearing on the safety of U.S. personnel; 3  The manner in which information on the attack was relayed to policymakers in the Departments of State and Defense, the intelligence communities, and other entities.

And then, the question. Precisely what was the president doing during the attack? Is it true that his attention was directed elsewhere...i.e. prepping for the big campaign fundraiser the next day in Las Vegas? Politics before American lives? One would think a White House with nothing to hide would be itching to deny under oath any such "prioritizing."

That is precisely Congressman Gowdy's point when he says he has "no friends to protect or foes to punish," and that in order to estimate time frame, he would "need to know how cooperative the other side would be."

Back to you, Ms. Pelosi, and also to you – yes, you with the phone and the pen.