After a full century of a steady string of wars, each related to the others as in a continuing narrative, one political scientist has undertaken to categorize them and their warrior practitioners.

The few who pay attention will ask "Who cares? War is war, does any one of them require a methodology niche? 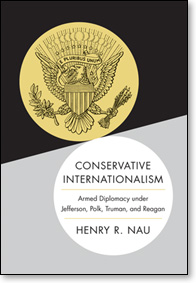 Leave it to a political science professor (from George Washington University) to sort it out in "Conservative Internationalism: Armed Diplomacy Under Jefferson, Polk, Truman, and Reagan."

Though Henry R. Nau may not end up advancing his own foreign policy dictionary far beyond academia, he has presented a useful reference work for researchers attempting to determine what inspires U.S. presidents to go to war and what dissuades them.

Of the several designations that Professor Nau analyzes, "Conservative Internationalism," which aims at a decentralized world of democratic civil societies, is linked to the foreign policy approaches of four presidents.

Further, when Professor Nau gets into history, his book takes off like a rocket ship.

Thomas Jefferson, our third president and also the first "conservative internationalist" (as defined by the author), understood the importance of "principle." Without it, he argued, no use of armaments and war was either credible or effective. Add to that Jefferson's expansionist zeal that world freedom "would grow" not only by defending, "but spreading liberty."

Too much foreign intervention, Jefferson was convinced, would be a "playground for despots, and reinforce domestic tyranny."

Had President Jefferson not consistently leaned toward the export of freedom, according to the professor, "it is doubtful that he would have sat at the table with French revolutionaries in Paris to design a charter of rights [including freedom of the press] or maneuvered so patiently" to close the deal on the Louisiana Purchase, which "doubled the domain of American freedom," the crown jewel in Jefferson's agenda.

"James K. Polk was without question one of the most ambitious and successful presidents in American history," declares Professor Nau.

Indeed, here is a man who not only had a plan to advance the young nation that elected him, but President Polk made himself a lame duck by announcing his intent to serve only one term. And in those four years, his "manifest destiny" was underway as he pushed the U.S. boundaries westward, and thus cemented the destiny that would increase these United States of America from coast to coast, truly a power to be reckoned with in the world.

The highly pivotal presidency of Mr. Polk, arguably worthy of more credit than some historians have chosen to accord him, has been criticized for, in some instances, using military force when diplomacy would have sufficed. This included such forays as the annexation of Texas, a war with Mexico, and a conflict with the British over Oregon.

Harry S. Truman's time in office, from the end of World War II and well into the Cold War, was noted in part for his having to clean up the negative fallout from the altogether too trusting relationship between his predecessor Franklin Roosevelt and Soviet leader Josef Stalin. The latter was finally recognized as no less power-mad than Adolph Hitler. 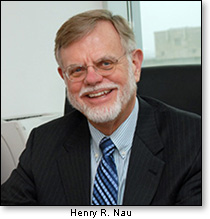 Truman's diplomacy was of the blunt variety. When he confronted Soviet Foreign Minister Molotov about Russia's failure to keep promises on Polish freedom or lack thereof, the Soviet official said he had never been talked to like that in his life. To which Truman responded, "Carry out your agreements and you won't get talked to like that."

"The man from Missouri" built up our military despite a war-weary America, although his Korean "police action" was less popular than Mr. Truman's forbidding obsession against Soviet expansionism.

The stormy domestic political flare-ups over communist infiltration at home and the communist take-over of China from our wartime pro-western Chinese ally (both on Mr. Truman's watch) rate barely a mention by Professor Nau. He does credit Harry Truman with creating NATO and preventing Western Europe from going Communist

Ronald Wilson Reagan was easily the most transformative president since FDR.

He was totally different from his predecessors who had either tried to build on FDR's New Deal (Lyndon Johnson) or, in a defensive crouch, agreed to live with it (Dwight Eisenhower).

The author writes that Reagan – who entered office secretly intending to bring down the Soviet Union without firing a shot  was enabled in that endeavor by a strengthened military and robust economy.

Here's how the Reagan approach compares to two of the other foreign policy methods defined by Nau: 1 – "Realism" (R) and "liberal internationalism (LI) favor "balance of power," while Reagan's "conservative internationalism'' seeks out competition of ideas; 2 – For Reagan, "moral equivalence" and "peaceful coexistence" are out; tilting the balance of power toward freedom is in.

The Gipper himself probably said it best: "Here's our foreign policy: We win. They lose."