Wes Vernon
Republicans' last hurrah? Or a step toward the grand prize? (PS-consider state capitols for '16)

November 11, 2014
Ah, yes! A sentimental trip once again down memory lane. It's like old times! This movie we have seen before, and count on its return every time Republicans score a major victory.

The deluge in 2014 came even before the votes were counted. It's about as predictable as a Swiss train's perfect on-time record; about as certain as the swallows returning to Capistrano; or Punxatawney Phil every February 2 making his reliable return to see if his shadow denotes another six weeks of winter.

The swallows and Punxatawneys of politics

We know the Democrats are frightened by a Republican Party that could score a "wave." It's as if someone punched a button to set off an attack by a wolf-pack media, especially if the victorious GOP is deemed mean enough to engage in policies that differ from the sainted, rightful "normal" Democrats whose precious right it is to rule. We are told by both "mainstream" media and Democrats (but I repeat myself) that the public will be "testing" the Republicans to make sure they behave and conduct themselves to be – well, to be like Democrats whom they just defeated.

Remarkable it is, indeed. Perhaps a big-name psychiatrist can sit down and draw down a huge fee for a learned treatise examining how it is that as one side wins a lopsided victory, the losing side begins to lecture the winning side on how to behave. Head-scratching, no?

Hmmm, does this add up?

Never mind that the voters have just booted the Dems out onto the street precisely because they concluded America's left party had done – well, a lousy job.

What's this? Are you telling me that voters actually do not like being lied to like that? It can't be! And here all along I assumed being lied to by politicians is a voter's favorite thing next to poisoned apples.

And so, a president has now been rejected by many voters who previously elected him, the same electorate that just six years ago had heard grandiosity such as stopping "the rise of the oceans," and bought into it.

Thus he meets reporters in 2014 – "the day after" – and says what amounts to "Hey! Don't forget me. I'm here." But the thrill is gone. Hmm, looks like voters accorded a flunking grade to their six-year "testing" of someone, does it not?

He clears his throat, and says, in his own way, something like, "And furthermore, I'll sign another piece of paper if Congress fails to obey my orders on illegal aliens." He uses the term "undocumented immigrants." You know, something like a bank held up at gunpoint by "undocumented bank customers." He says he will deign to give Congress time to act, but remember he "won't wait." Perhaps he will "dismiss Parliament," just like they've done in other countries, and sign an executive order as, alas, has been happening in this country in recent days. 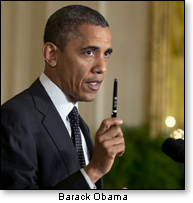 But now, the Republicans have the numbers in Congress to fight back. That's when we find out if his orders are granted all the respect of a "pen" out of ink and a "phone" going unanswered.

And this guy was an adjunct professor of constitutional law? Quick! This is an emergency!

Just as the government issues a recall for defective automobiles or whatever, we must send out a recall to all the students who took his class. Those poor kids (at the time) apparently were taught that the Constitution says, "All legislation shall be written in the Oval Office of the White House. The president shall direct his underlings on Capitol Hill to get cracking and rubber stamp the orders from the nation's chief executive, who shall snap his fingers and warn 'We can't wait.' Whereupon, his obedient servants in the House and Senate shall cease and desist from attempting to write their own legislation or even [gasp!] vote it down (regardless of the possibility that, in sheer impudence, their constituents sent them to Washington to decide the fate of proposed laws)."

And what is the "emergency"? Let's imagine that all over the nation, young lawyer-graduates from Obama's law class have been citing their understanding of the Constitution only to be confronted by skeptical judges who thereupon have proceeded to laugh them out of their courtrooms.

Unfortunately, in real life, the man can still do damage even though he's up against a more level playing field the next two years.

This column has pondered the theories that are "out there" as to what exactly makes this president tick. We would hate to think that he has developed such a chip on his shoulder that he would deliberately harm this nation that twice honored him with its highest office.

So let's consider that he's just stumbled – that he really does have that tin ear that left us flabbergasted that he would run off and play golf after learning that an American had been beheaded by an enemy that he refuses to call a terrorist.

Wouldn't that suggest – wouldn't that demand – that the next time we pick our leader, we find someone who has had some real executive experience? No, not a "community organizer." We tried that. And no, not Madam Secretary "What difference at this point does it make?" We got a troubling preview of that too, remember? 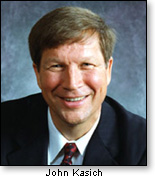 Some stellar governors were re-elected last week: John Kasich in Ohio; Rick Snyder in Michigan; and (oh, happy day!) Scott Walker in Wisconsin. There are others. One who may prove his mettle is Larry Hogan of my own state of Maryland, a well-spoken common-sense businessman who scored what was arguably the most stunning upset of the evening, winning the governorship of this bluer than blue state by a margin of 5 percentage points. (Footnote: Forty years ago – 1974 – Hogan's father gave up a safe congressional seat only to lose a bid for Governor in that bad old "Watergate year.")

And look: don't start in on me that one or more of the governors cited here may be suspiciously imperfect. We are suggesting merely the start of a focused research beginning now. Besides which: Governors can't vote "Present." And yes, we know Romney was a governor, but it doesn't follow that other governors will make the same mistakes he did, or that they would make any seriously damaging comments of their own.

Whether Republicans nominate a governor or someone else with executive smarts, we can hope for a well-qualified team ready to take the plunge. There is reasonable hope, more than we have had for years. God Bless America!