December 15, 2015
The presidential debates this year have reached all-time highs in audience interest. There's a reason for that: Americans know their country is in trouble, internally and externally. The debates are being closely watched by more Americans than ever, as voters look desperately for someone, anyone out there prepared to "do something" while we still have options.

Our people know, or in some ways sense, their country in their lifetimes has been changing in ways they don't recognize. When the President of the United States says of course our nation is "exceptional," just as people in every other nation on the globe see their country the same way, Americans see that as a dodge. 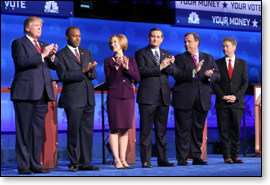 They see a decline in the culture, forced on us by those who can't be satisfied to agree or disagree, but who try to shut up those who dissent from the current leadership's "politically correct" policies at home and lack of preparedness in relations throughout the world.

Those who despair at the assault on America from both inside and out increasingly encounter not mere disagreement, but attempts to destroy them personally, professionally, socially, and politically.

They see our weak position in the world – as our leadership refuses to name the enemy and instead becomes an apologist for that same adversary, while lashing out at those who express concerns about such life-and-death security issues as vetting thousands of refugees without sufficient means of first determining who these people are and whether murder-prone enemies of this country are among them, and if so, whether they can be weeded out. Anyone expressing common-sense desires to deal with those questions is disparaged.

We now face an unprecedented dilemma: We're under leadership which is (at the very least) indifferent to the nearly century-old threat of communism and seemingly supportive – by actions or inactions – of radical Islam. This column has never underestimated the president's intelligence, though he is fully able to wish and pretend something is true when it clearly is not. In previous eras, that behavior was known by other terms.

One can love the institution of the presidency. It was given to us by the great constitutional convention that founded our beloved country over two centuries ago. But our forefathers warned us that even with all the protections they inserted into our founding document, there will be power-obsessed scoundrels who will attempt to subvert it.

That is not to say we won't have leaders who make mistakes. Honest mistakes are one thing. The Constitution itself provides ways of dealing with that. But it was the late Defense Secretary James Forrestal who was quoted as commenting that if our leaders only made "mistakes," they would occasionally make one in our favor.

So as we approach this year of decision, we will here attempt to look at what's likely to happen in our country after the elections of 2016, and try to navigate our way through decisions that realistically can narrow the field down to a ticket dedicated to fending off threats (foreign and domestic) to our survival.

We take this more immediate opportunity to review the Republican candidates – their pros and cons. Our focus will be the Republicans, who do indeed have their pros and cons – but unfortunately the Dems offer us nothing but a woman whose brushes with the law have put her under an FBI investigation; a failed governor of Maryland; and a socialist who went to the Soviet Union on his honeymoon. (Hint: Young people who are not taught non-Marxist history in school may have trouble understanding this, but try to imagine a candidate for U.S. President in the late thirties choosing his honeymoon in Nazi Germany.)

You would expect, starting out with 17 candidates, that the GOP would be unable to avoid the "take no prisoners" debates they've been having. But they seem to be slowly getting to the winnowing down process, though they could be doing a better job. Herewith a quick-take analysis of the way things stand at the moment.

The Donald is doing very well – notwithstanding his slip in the polls at the moment, likely in part because of his advocacy for a temporary ban on Muslims entering America.

Muslims, as expected, are angry...But wait....1 – This is about barring entry, not about kicking them out or massive house-to-house deportation. It is a "sorting out." Not all Muslims are terrorists. Fine! Then shouldn't we try to find out who is and who isn't one before we swing open the gates?

And anyway 2 – There is no inherent right to enter this country. Every nation has the right to pick and choose from amongst those who wish to immigrate to its shores. Plus – Radical Islam has declared murderous war on America...No such meaningful threat comes from any segment of any other faith. We have the right to protect ourselves.

There are questions about The Donald's spotty past record on conservative issues. But for many conservatives, "all that is forgiven." Hmmm. Well, maybe.

On another issue re Trump: With all the personal money he's pouring into his campaign, can't he afford to hire someone who will advise him to wipe that angry look off his face. Even serious people who support him likely agree the appearance of a humorless grump does not sell. 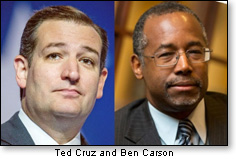 The brilliant brain surgeon, it is safe to say, has a high IQ. I loved the way he humiliated the current White House occupant at a 2013 prayer breakfast. His calm demeanor impresses. But even a person with his skills and friendly persona needs to "know his stuff."

He's a good man, but he needs to study up on foreign policy. With Dr. Carson's smarts, he should be a quick study. If I may turn a phrase, that's easy because "This is not brain surgery." Supporters should hope he's hitting the books and talking to the right people. But he needs to hurry. Time's a-wasting.

Speaking of pure smarts, Senator Ted Cruz (R-Tex.) has the potential for devastating Hillary in debate. His brilliance doesn't always play to his political strengths. When he was brand new to the Senate in 2013, the "new kid on the block" struck some senior colleagues as something of a "smarty pants." (See, you can't win. If Dan Quayle is a dummy because he misspells potato, Cruz is a "smarty pants" because – well because he just knows so much more than the rest of us; and he's too quick on his feet. That's not fair.)

Despite all that, Cruz...1 – is in fact smart, has a quick mind, a quality that should position him well for the presidency, and 2 – heart is firmly with American conservative values. Some see him as "Trump without the insults."

A "glass ceiling" smasher if ever there was one, and she also has great potential for taking down Hillary in debates. A former Hewlett-Packard CEO, Carly Fiorina does need to unsnarl the controversy over her exit from that firm. . A shareholder fight can be nasty, and the best man (or woman) doesn't always win.

He is moving to the "top tier" even though seen as having been weak on immigration issues. Not the "outsider" on the order of those discussed above, but acceptable to some conservatives. Sometimes seen as a "compromise" candidate. Has an interesting life story. 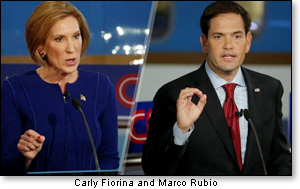 This group – if we're talking of those with even a slight chance of breaking through – has a tough road ahead Christie – Good speaker, a sort of "street-corner conservative" even if he falls short on some conservative issues. For some, he's "too Joisey." Bush (Jeb) – Impressive polish as a speaker and a former governor, a proven executive, but haunted by support from "establishment" Republicans in this year of "the outsiders"; plus the question: "Do we really need another Bush?" That may be unfair, but it is there.

We are hearing about the possibility of a "brokered" convention – i.e., going to Cleveland without one specific candidate having been decided. That conjures up visions of the old smoke-filled room (smoke would be gone, but not necessarily the crafty doings the term suggests).

Grassroots types are suspicious this may be a ploy by moneyed "moderates," who (having been rejected by primary voters) are planning to see to it that a "puppet" candidate is nominated.

Though the script would be different, the prospect here for chaos conjures up visions of the riotous Democrat convention in Chicago of 1968. I was there. To make a long story short, you do not want that...

Wrapping it up (for now)

We've reviewed some reasons for widespread angst over 2016. But we need to talk about an issue that is curiously little discussed, even in the conservative media. Later.