Wes Vernon
Can Obama fire Comey? Does he dare?

November 5, 2016
Will President Obama fire FBI Director James Comey? By following the law and pursuing corruption wherever he deems it within his purview to do so, the director is seen by most Americans as simply doing the job he should have done last July, instead of appearing to give the Democrat presidential hopeful a pass. 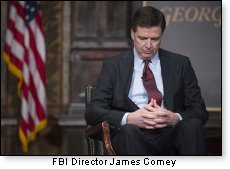 Supposedly the president has the power to fire anybody in the federal government.

But not every rule is without its ifs, ands, buts, or maybes. This could be one of those. After the legendary FBI Director J. Edgar Hoover died, it was resolved that any future chief G-man would be required to be more accountable than was the often freelancing Hoover.

Hence, the decision from then on to hold the FBI director to one ten-year term. Comey, appointed by Obama, has several years left in that tenure.... But what about the long-valued policy of keeping the FBI reasonably independent of the White House? The current Clinton scandals demonstrate the rationale behind that concern.

One can see where firing the head of the FBI under these circumstances can also be considered a conflict of interest, considering that Hillary is the candidate of the president's party. Oh, but Mr. Obama is the president after all, is he not? Several White House aides, including the influential Valerie Jarrett, are urging the president to fire Comey.

We will, for the moment, put that quandary aside. The nagging question for President Obama may be: Does he even dare fire Comey?

If the director were cut loose from the White House, Mr. Comey would be even more free – about "talking out of school" concerning ongoing investigations – very embarrassing ones to Mr. Obama's precious legacy which could be marred even in the eyes of many of his adherents. Mr. Obama personally need not worry about the voters. But the history books can be brutal.

Whatever happens in the election, the string of investigations now underway threatens the ability of Hillary to govern in her high-handed "big me, little you" way even if she does squeeze through at the polls.

Here are the "questions" unanswered and yet to be determined as of this writing:


1. The handling of classified information on the Clinton e-mail server.

2. Whether the Clinton Foundation was used to peddle influence in a "you scratch my back and I'll scratch yours" manner to the tune of big dirty money.

3. Whether there was an illegal Chinese donation by a Clinton intimate.

This laundry list of criminal allegations rubbing off on or potentially engulfing a would-be President of the United States as presented by one of America's major parties will hound the Hillary Clinton administration, indeed assuming there will be one. Recall, Watergate did not go away just because Nixon won re-election in a landslide. Oh, but watch the media try to slither away from their duty with the attitude of so what. Nixon was a Republican, after all.

Won't work this time. Back in the seventies, we didn't have the internet, WikiLeaks, talk radio, or potential new cable TV channels (even if Fox chickens out). All of these we have today, though in dark corners, you can be certain there are efforts being discussed on how to get rid of them.

This time, there's a decent chance that some impudent media truth-tellers out there will sass back the pooh-bahs who have arrogated unto themselves the reserved privilege of enunciating from on high the sacred word of the dominant left.

Notwithstanding his flaws, the Donald at least has the desire to put the Good Old USA back on track. And for a rookie politician, he shows signs of learning. He loves America and is repulsed by the America-haters in high places who have tried to trash this great country.

This is not a game. We are in danger.

That was demonstrated the other night when radio talker Michael Savage took a call from a man who has retired from the CIA. The host asked the caller what could happen to a patriot without power or fame who dared to declare publicly his objection to the sell-out of this country. Might that person become the target of an attempt to wipe him out. Replied the ex-CIA man, "I can't confirm or deny that."

We will keep our front-row seat for the ongoing history that's on Stage USA – whatever happens in the election. 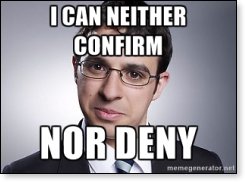