Wes Vernon
The real battle to take down America – Hint: It isn't just about Trump

February 21, 2017
If President Trump were to make a mysterious disappearance or die tomorrow (or a combination of both), the enemies of America (within our shores) would not miss a beat. They are, of course, furious that the Donald would dare to seek the 2016 presidential office that had been reserved for Queen Hillary, whom they had anointed to replace the communist-mentored Barack Obama. 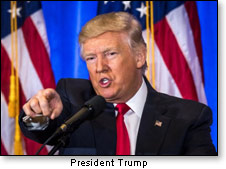 This column for months has dared anyone to name one solid, substantive move that Obama made during his time in the White House that a communist or Islamic terrorist would not have supported.

Remember, killing Bin Laden doesn't count. He had served his purpose for "the cause." Besides, the brave military men who did the job deserve the credit. Obama just let a lot of Bin Laden's native colleagues through the back (and front) doors of a de facto no-borders U.S. policy. The result was that from among the unwelcome gate crashers, there were killers who killed as they had prepared to kill – Americans. Obama figuratively unlocked the gates, enabling others of them to attempt more murders.

Right now, the campaign to take down the Trump presidency is crafted by, among others, those who are either in the pay of the U.S.-hating George Soros, or are knowingly acting on their own initiative by following the policy of Islamic terrorists, or are allied with Marxist murderers taking orders from the anti-American movements that have for nearly a century targeted the U.S. for destruction.

(Note: When the current Prime Minister of Israel, Benjamin Netanyahu, was that nation's UN ambassador, I interviewed him while hosting a radio program about his then best-selling book that included information as to how the Soviet Union had created many terror groups in the Middle East. Armed with that information, one can understand why – from their warped reasoning – the later mass murder known as 9/11 made "sense." It added fuel to the fire of their interpreted "religious" belief that they had an Islamic terrorist "duty" to kill Americans, period. Not every Muslim is that committed to take down America. The question is: How many Americans need to be killed before we take the defensive, well-thought-out action required to avoid mass murder here and abroad?)

Now in the 21st century, there is a "war" being prepared: To what extent is this just one more in the long parade of events related to the downfall in recent days of President Trump's National Security Adviser, Michael T. Flynn, who was dumped just the other day?

The "T" word? Patience, please. We're getting there 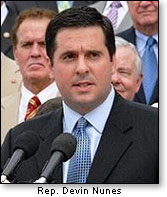 On February 14, Congressman Devin Nunes (R-Calif.), Chairman of the House Committee on Intelligence, had this to say on the Flynn resignation: "Michael Flynn served in the U.S. military for more than three decades. Washington, D.C. can be a rough town for honorable people like Flynn – who has always been a soldier, not a politician – he deserves America's gratitude and respect for dedicating so much of his life to strengthening our national security. I thank him for his many years of distinguished service."

Betrayal in the air?

Bad enough we get the Soros-paid insurrectionists on the streets imposing violence that goes well beyond the right to protest. They also are "deniers" who refuse to live with the fact that their candidate Madame Clinton lost, and then move on. These street brawlers are dishing it out in the Marxist strategy of destruction in typical "Cloward-Piven" style: Top down, bottom up. The aim: to destroy.

Cloward-Piven strategy: The creation of a couple of university professors. In this case, Top-Down, Soros at the top with the money; Bottom-Up, the street brawlers whose job is to raise un-shirted hell. The result: chaos.

What our 45th president will never be forgiven for is not merely running for President, but winning and – outrage of outrage – having the impudence to set about doing exactly as he promised: putting America back together again, or as he would put it, "draining the swamp."

Such efforts on behalf of America and Americans must be punished.

The punishment is to be meted out possibly in a post-coup, enemy-occupied gulag or concentration camp. Such would surely be unsurprising tools imposed by those who have nothing but hatred in their hearts for America and for those who love its Constitution and way of life. And remember, there have been reports over the years that supposedly "educated" people in this country have mused aloud about using that and similar tools of vengeance on those who stand up for America in the face of those who would destroy it.

Cliff Kincaid has written that "The media have figured out they can't bring down or impeach Donald Trump. So they are targeting his Cabinet officials and top advisers one by one. In the case of Michael T. Flynn, the media think they have hit pay dirt." 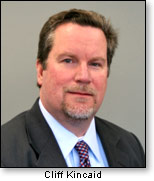 Kincaid goes on to trace much of the anti-Trump mischief at least in part to The Washington Post and, perhaps more boldly, to the CIA. The CIA, of course, has been accused of much mischief or incompetence over the years since it was established in 1947 as an outgrowth of the old OSS from World War II. The suspected assassination of that war's hero General George Patton has never been prosecuted nor officially solved. Then and now, the "T" word may have been appropriate. Any rank and file American can criticize the CIA or any intelligence agency, but many a claim of "the seriousness of the charge" has a way of disappearing from public notice.

And speaking of the WP

The Post's Watergate reporter Bob Woodward was seen on Fox News as saying that the CIA had been using "unverified garbage" in a campaign to destroy President Trump. Kincaid figures that because the intelligence community was unsuccessful in going after Trump himself after just four weeks in office, they might have figured the next step down the ladder was Flynn, who was an easier smear.

Are we seeing here the beginning of a coup to take down the President of the United States? General Patton's offense was arguing strenuously for marching to Moscow and doing to Stalin what we had done to Hitler. Today, Flynn's offense is mired in charges and counter-charges, many of which are credibly dubbed by Woodward as "garbage." Isn't it time, after all these years, that we follow the leads that can settle the question as to whether we are – again – being lied to? Would facing that now be better than what could happen later?

Maybe it's either that or...

What about this choice? Civil war, anyone? Make no mistake, if they can't take over America with ballots, our enemies intend to accomplish their "revolution" by bullets.

Micah White, co-founder of the Occupy Wall Street movement, let it be known that even the violence and disruptions of the pure hatred that manifested itself in the sixties were mild by comparison. "The only way to gain sovereignty is to win elections or win wars," he said. 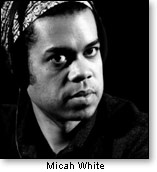 Read back that quote again – word by word. Here is a revolutionary saying in plain English that you and I and every other man, woman, and child in America will be exterminated unless we bow to the Marxist (or caliphate) state. That threat is out in the open as a declaration of war, right here on our city streets and in public places. (Apparently, this skewed version of saying in effect that either this 21st century version of derangement prevails and our enemies get their way, or you w-i-l-l d-i-e. Got that, Mr. and Mrs. America?) It's a little like saying, "We're the good people seeking justice, kindness, and our peaceful way of life. Forget about your "elections," or we will blow your head off.

However, we had our elections. They were won by real Americans who cast ballots. If our opposition wants war, they will force it through their damnable condemnations and Kill! Kill! Kill! because they can't win elections. During the Obama years, these insurgents were relatively civilized, as their leader (sworn to uphold the law) opened the gates and publicly urged illegal aliens to cast illegal ballots. Maybe we'll have to toss these – misfits – behind bars for the rest of their days. At least, in our justice system, they will be accorded all the rights of accused criminals in a courtroom – which is more than we would get in their concentration camps.