September 15, 2009
This is the breaking news mentioned last night in Investigating Obama and The Awakening. Below is a post by Larry Sinclair, from his blog, "...on all things Obama," about what he indicates he was asked by Dr. Taitz, to do.

Affidavit to be Filed with Federal Court in Santa Ana Today

I have tried to stay neutral in the cases of Orly Taitz and have even tolerated the attacks from her and her supporters. I will no longer. Orly Taitz needs to be held accountable and responsible for her actions and her actions need to be made public.

I tried to be as polite as possible when explaining how I was contacted by Orly Taitz and what transpired on September 7, 2009 in personal meetings with her. Seems Taitz and her supporters have decided they need to engage in attacks and making false statements in a chat room by the name of "Tavern of the Ghost Spider" and other sites to try and keep up the FRAUD that I am now convinced Orly Taitz is engaged in.

Allow me to correct one thing being claimed by Taitz and her marks: Orly Taitz at no time was in any airport with me and never once yelled at me anywhere. Now to make such claims is a bit telling as to her motives.

Later today I will be faxing to the United States District Court in Santa Ana, California as well as to the U.S. Attorney's Office an Affidavit informing Judge Carter that on September 7, 2009 Orly Taitz did knowingly and intentionally ask me to appear before his Court on September 8, 2009 and give knowingly false testimony for the purpose of obtaining "expedited discovery," and to gain publicity for my book.

I have made it clear from my first going public on YouTube January 17, 2008 that I will stand by the truth and would not allow anyone to misrepresent my statements nor would I be dishonest in any way. Orly Taitz as an officer of the court engaged in behavior that if allowed to go unquestioned will harm any and all valid claims made on Barack Obama's eligibility now or in the future. In the words of an Orly Taitz supporter, "She can't lie and ask others to lie at the same time accusing Obama of lying. Lets get to the truth but we have to be honest in doing so."

The sworn affidavit will be provided to other web sites for posting in ifs PDF format for downloading by anyone who wants a copy. 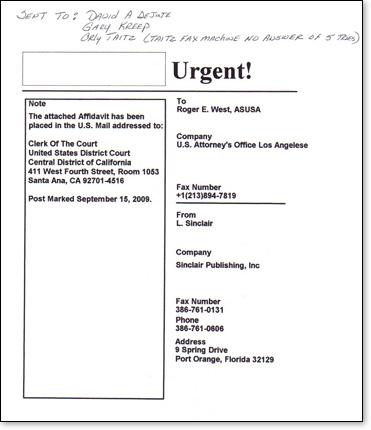 Larry Sinclair's mail to the U.S. District Court involved (Sinclair explained, they do not take faxes): 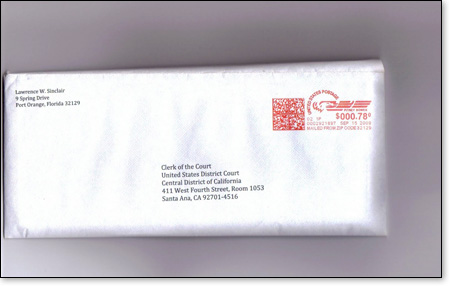 I.O. repeats the call: do you also know of significantly unethical or even illegal behavior on the part of Orly Taitz, as it pertains to the movement for constitutional justice regarding Barack Obama, by the constitutional standards for natural born Citizenship? If so, please email arlenwilliams@yahoo.com. I want to help you.

We the People of the United States of America are owed competence, honesty, and allegiance, in this matter. Please see immediately prior I.O. article on Orly Taitz and Barnett v. Obama and its comments, for more reality.