We may believe we know celebrities from the familiarity of their video appearances. But the persona we may get used to seeing is not necessarily the real, nor whole person. Some now see candidate Donald Trump's public behavior and are quite concerned. Is he merely the benign if very outspoken rogue, as so often depicted by grinning pundits? A known quantity? I suggest no easy dismissal of caution after sharing observations with Sam Vaknin. 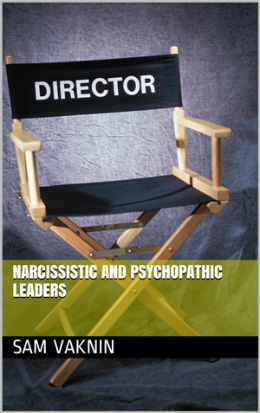 Shmuel "Sam" Vaknin, Ph.D. is an authority on the subject of narcissism, having written the widely read and very favorably reviewed book, Malignant Self Love: Narcissism Revisited, also Narcissistic and Psychopathic Leaders. His work is cited in dozens of scholarly, peer-reviewed articles. He may be described as a polymath, with extraordinary expertise (and experience) in abnormal psychology, and with focuses including temporal physics (his Ph.D.) and politics (see his Web site and YouTube site).

AW: Psychiatrists are generally precluded from publicly discussing their opinions or findings concerning individuals' mental illnesses. But Dr. Vaknin, your expertise comes by over twenty years of focused study of Narcissistic Personality Disorder (NPD) free of such inhibition.

You have related grave concerns about one of our Republican presidential candidates. I think anyone might connect narcissism with Donald Trump as a fairly obvious and perhaps innocuous trait. But you mean something else.

Vaknin: I do. I was the first to introduce pathological narcissism into the terms of the political debate with my July 2008 essay where I suggested that Obama may be a narcissist. Obama is intelligent and prosocial. Trump clams to be the former, but he is definitely not the latter. I regard him as much more of a menace than Obama ever was to the future of the USA and, by extension, the world. I am shocked that – despite an increasing awareness of the dangers of narcissism in the media and in the public – Trump is still making any headway in this election cycle.

AW: What is NPD and how "malignant," as your book title implies, is it? 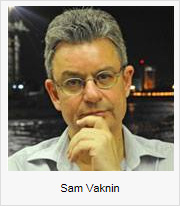 Vaknin: The latest, fifth, edition (2013) of the Diagnostic and Statistical Manual (DSM) – the classificatory bible of psychology in North America – has done an excellent job of revamping the definition of NPD by introducing a dimensional description of the disorder. But, the diagnostic criteria from the previous, fourth, edition of the DSM are more accessible to laymen. So, here they are, updated with the latest knowledge we have about this pernicious disorder. You can easily see Trump writ large in each and every one of the nine criteria.

The narcissist ...
AW: How likely do you believe it is that Donald Trump has NPD, and why? Can you surmise how far up or down the NPD scale he may be? 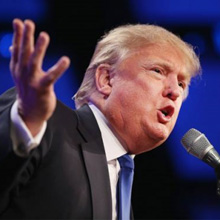 Vaknin: I have watched 600 hours of video of Trump. Here are my preliminary clinical observations:

Trump confabulates a lot and has grandiose fantasies, which he has come to believe in, thus partially and intermittently losing touch with reality (delusionally "failing the reality test").

Trump is hypervigilant to the point of paranoia, besieged by conjured enemies and imaginary slights to his person, appearance, or accomplishments. He reacts aggressively and vindictively to such perceived narcissistic injuries and humiliations. His is a siege mentality.

Trump is a compulsive attention-seeker and will go to any extreme to obtain it.

Trump is counterdependent: he abhors authority, rules, traditions, and "The Establishment" and rebels against them vociferously and ostentatiously. He is manifestly defiant and abrasive.

Trump talks about himself in the third person ("Trump will do this") and often uses the royal "we" to refer to himself. His first person pronoun density (the number of times he uses "I," "me," and "myself" in a conversation or in interviews) is the highest I have ever heard from any politician, Obama included.

Trump places a premium on appearances rather than on substance.

Trump is highly somatic and hypochondriac as he emphasizes the way he dresses and refrains from damaging his shrine-like body by consuming substances like alcohol or nicotine. He is self-worshiping and painfully self-conscious.

Trump is disproportionately aggressive, hypersensitive, and defensive, faking superiority which, in all probability is compensatory: it masks a deep and unsettling sense of inferiority and extreme awareness of and an agonizing dependence upon what other people think of him ("thin skin").

Trump lacks empathy and clearly enjoys embarrassing and hurting other people gratuitously. Such antisocial misconduct makes him feel (and, in his mind, actually renders him) all-powerful and God-like ("omnipotent").

Trump has an inordinately developed "cold empathy": the kind of an "x-ray vision" that allows him to immediately spot the vulnerabilities, weaknesses, and chinks in the armor of his interlocutors, adversaries, partners, and enemies and to leverage this knowledge to his benefit by penetrating their defenses. He therefore resonates powerfully and intimately with the hidden hopes, dreams, fantasies, delusions, and negative emotions (rage, hatred, fear) of his "constituencies." He is a consummate predator.

To my mind, Trump is the most perfect example I have ever come across of a malignant and, probably, psychopathic narcissist. Of course, he cannot be fully and assuredly diagnosed this way. Only a qualified mental health diagnostician can determine whether someone suffers from Narcissistic Personality Disorder (NPD) and this, following lengthy tests and personal interviews. But the overwhelming preponderance of presenting symptoms and visual and textual evidence for tentative profiling is definitely there.

AW: Mr. Trump is renowned for his personal attacks through mass media including his Twitter account. He has recently threatened two other wealthy men with reprisals for behavior he purports to be against him: Tom Ricketts (also, Ricketts' family) allegedly for "secretly" spending money in opposition to his political ambitions, and also Jeff Bezos, whose Washington Post has editorialized against his candidacy. He also threatened to sue Ted Cruz for his ad about Trump's varying positions on abortion. Is such behavior likely to be a trait of NPD?

Also, one doesn't usually associate narcissism with violence, but Trump has apparently come out for ordering our military and/or intelligence personnel to murder the families of terrorist combatants, also to torture supposed terrorists in ways "a hell of a lot worse than waterboarding." These are regarded as war crimes. Does this suggest problems in his make-up beyond NPD?

Vaknin: All narcissists lack emotional empathy and are, to some extent, anti-social. Many narcissists are somewhat psychopathic and, therefore, sadistically prone to violence. They get a high and derive an almost sexual gratification from wielding power and inflicting pain and humiliation on others. It sustains their grandiose fantasy of omnipotence (that they are Godlike, all-powerful). That's why many narcissists are litigious, threaten "their enemies" incessantly, seek to embarrass and humiliate them in public, stalk them, and harass them recurrently. Narcissists have a black and white view of the world: if you are not 100% with me, you are 110% the enemy (this is known as "splitting" in the psychological jargon). Trump strikes me as this type of narcissist.

AW: Is it your considered opinion that Donald Trump would represent a significant danger were he to become president of the United States of America and if so, how?

Vaknin: You just have to look at Trump's business history to extrapolate America's future under a President Trump. Narcissists are unstable and go through repeated cycles of self-destruction (with other people usually paying the heft of the price). Narcissists tend to be divisive, vindictive, confrontational, aggressive, hate-filled, raging, incoherent, judgment-impaired, and irrational. Narcissists are junkies: they are addicted to attention ("Narcissistic Supply") and will go to any extreme to secure it. Narcissists are liars, confabulators, and miserable failures (although some of them, like Trump, are geniuses at disguising the fact that they are, in fact, losers). Is this the kind of person you want in the White House? 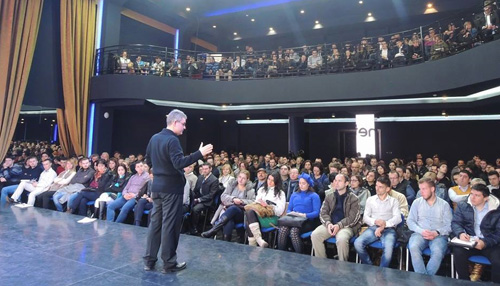 While Dr. Vaknin was the first to publicly point out Barack Obama's narcissistic tendencies (and took a great deal of heat for it) other experts in human behavior have also been warning of the apparently more pervasive problems of Donald Trump.

"A Neuroscientist Explains: Trump Has a Mental Disorder that Makes Him a Dangerous World Leader," RawStory, Jan. 18, 2016

Other Trump articles by Dr. Ramini