June 15, 2010
Some of the truth has been hiding in plain sight since May Day, at AL.com. Visit the government at work, specifically the National Oceanic and Atmospheric Agency of the U.S. Department of Commerce (NOAA) meeting in "Warroom 1." They are intently collecting data on what is apparently the 22nd, 23rd, or 24th of April. They are scientists for an United States government which refused massive clean-up help from foreign sources. then, and refuses such help now  an U.S. government which seems to have lied to us, all this time. Note the following:

At 6 minutes 35 seconds, the man on the phone says, "I've heard two different estimates on, some'n, far as uh, between sixty-five and a hundred thousand barrels a day."

Then, see what is written, back at the War Room's white board (frozen in time, below). Those are numbers much, much higher than the story they have given the public, then or now.

Compare these early numbers with the evidence discussed here: 65,000 to 100,000 barrels per day on the telephone call, 64,000 to 110,000 barrels per day on the whiteboard, and 53,000 to 110,000, in the notebook. Look for anything written around those numbers in the video. Do you see words such as "could eventually become?" I do not. The white board prefaces its numbers with terse immediacy: "estim." Further, by that point, they had noted a "twelve mile long slick of emulsified oil," visible by aircraft.

The only part of this May 1st report by Ben Raines which seems at odds with observable facts is its title, in its use of the words, "potential for." No, these appear to be concurrent estimates of the actual oil being blasted out of that orifice in April, not analyses of potentials.

A National Oceanic and Atmospheric Administration video, shot as officials coordinated response to the Deepwater Horizon disaster, shows that federal officials almost immediately worried that the oil well could leak up to 110,000 barrels per day, or 4.6 million gallons.

The video appears on a federal Web site.

It was filmed in Seattle, at NOAA's Western Regional Center, as scientists and federal officials in Seattle, Houston and New Orleans engaged in telephone conferences, according to a companion document on the Web site. 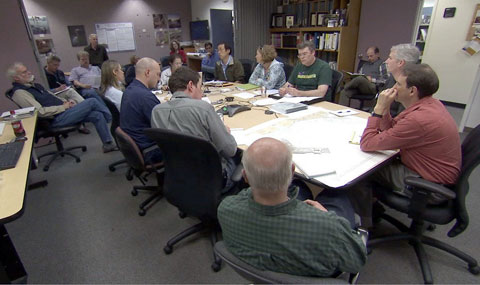 View full size (NOAA video still)Federal officials discuss the Gulf of Mexico oil spill soon after the explosion of the Deepwater Horizon offshore drilling rig. The image is a still frame from a NOAA Web site video depicting the meeting at the agency's Western Regional Center in Seattle.

The video appears to have been edited, and it was shot by a person carrying a camera from room to room.

In it, officials are discussing the search for survivors of the Deepwater Horizon explosion. There is a hand-drawn map of the spill dated April 22. At one point, the video freezes on a sign next to a door that reads, "War Room."

Officials estimate current flow from the damaged well at 210,000 gallons a day.

It is unclear from the video what events would have to transpire to raise the flow rate higher. 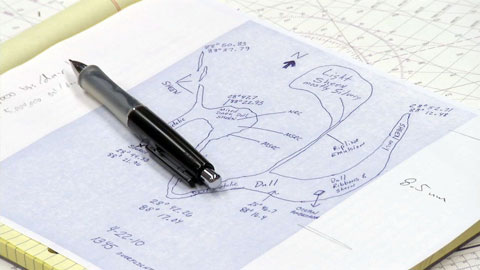 View full size (NOAA video still)A hand-drawn map of the Gulf of Mexico oil spill dated April 22, 2010, is seen in this image from a video downloaded from the NOAA Web site. The video shows federal officials discussing the oil spill soon after the Deepwater Horizon exploded.

It describes newly discovered leaks in the tangle of riser pipe, attributing them to ongoing erosion of the pipe. The riser pipe, in this case about 5,000 feet long, connects the wellhead on the sea floor to the drilling rig on the surface.

"If the riser pipe deteriorates further, the flow could become unchecked," reads the report.

On Thursday, the day after the NOAA report was circulated, BP officials said they were worried about "erosion" of the piping.

Sand is an integral part of the formations that hold oil under the Gulf. The raw crude rising from the bottom of a well carries sand and other abrasive materials. In effect, the oil is sandblasting the piping as it rushes through with tremendous force, according to petroleum engineers.

"I think we need to be prepared for it to be the spill of the decade," Debbie Payton of NOAA, the meeting's coordinator, says during the NOAA video.

NOAA did not immediately respond to the Press-Register's request for comment on the video. 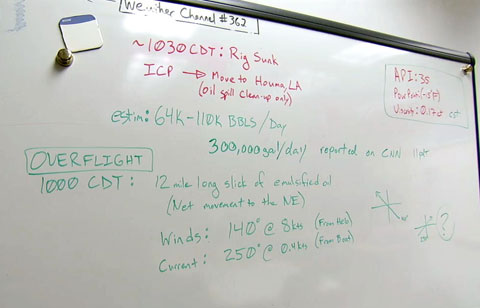 View full size (NOAA video still)A still image from a video downloaded from the NOAA Web site shows a dry erase board with figures depicting the potential oil flow. Oil has been spewing into the Gulf of Mexico since the offshore drilling rig exploded and sank. Eleven oil rig workers are missing and presumed to be dead.

You can read this at it's original site, published May 1st, at AL.com.

Does anyone reading this believe that BP is the problem in allowing this crisis to become more "significant," the word Rahm Emanuel used in his famous quote, "You never want a significant crisis to go to waste?" Is this administration allowing this disaster to worsen, in order to push for Cap and Trade law and a Climate Change Treaty? Are they actually fostering this horrific calamity, to build the coffers of investors in the Chicago Climate Exchange, while further transferring America's wealth to foreign nations and instituting global government over the sovereign United States of America (as reported here)? Is this effectively a false-flag attack upon this nation, blamed on an oil-rich "capitalist" corporation?

Follow the money, the means, and the ends, and see if you find extortion and globalist Marxofascism. As guest contributor, CJ affirmed last week, we need an honest and comprehensive investigation of this  a criminal, RICO investigation which must include members of the United States Government.  AW