November 12, 2010
George Soros: again from the voracious Mouth of Soros, this time "god" describes how he has had "a lot of fun" subverting governments and "disrupting" regimes deemed by god's Marxist mind, "repressive." Shucks, inevitably, folks are hurt, he says. But, "unintended," George? Reeealyy? 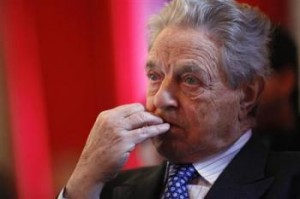 His work in his words is to develop a "matrix" of "national foundations" with the one hand, and with the other "certain... specialized... activities...." As Glenn Beck has more than begun to explain and Van Jones has alluded, for us Americans, this has to do with the czar network, executive orders, legislation, UN commitments undermining American Sovereignty, to (allegedly) clean up (perceived) messes — including messes fomented by Soros' own certain... specialized... subversive... disruptive... activities....

To bad those messes hurt so many so much — and the authoritarian solution, even more. Oh well.

Do listen to this. Over and over again, if you need to. Catch his words in his identification, depiction of, and intentions for the United States of America.

It is Alinskyism, it is Cloward-Piven. It is Marxist Revolution 101.

When you see the term, Open Society, think Gorbachev's Glasnost. It is essentially, Communism as a Trotsky-style effort at rule by the super-elite, manipulating a permanently dependent majority as the "dictatorship of the proletariat."

Pam Key, of NakedEmperorNews.com fame, has hooked a gig on The Blaze. Good for her. (Good for them.) I see her videos are proprietary to The Blaze, now — common for big media. Pam has been a guest on the "The Awakening," with Sentinel Radio. We wish all good things for Pam. Be careful with the moguls. "When the elephants play, the grass gets hurt."

Liked The Matrix, George, as sci-fi movies go. Making it happen to America, not so much.