November 10, 2011
It has been a gross failure for America's governors, including Wisconsin's Scott Walker and Ohio's John Kasich, not to make it utterly clear that collective bargaining for public workers, who are forced to join unions led by Marxist revolutionaries, does the following in present day America: 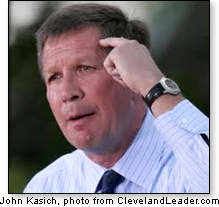 This is how a present day, Marxist, anti-American revolution works.

And not being told the truth of it all, clueless America instead feeds from the disinformation of our fifth column Marxstream media, union bosses, and subversive neo-Marxist and leftist dupe politicos. Case in point, from this report of the Washington Post:

Ohioans voted Tuesday night to repeal a Republican-backed law that restricted collective bargaining for public workers, a victory for Democrats and labor organizers both nationally and in the state.

AP has declared Issue 2 (as the law was called on the ballot) dead. As of this writing, with about 75 percent of precincts in, repeal led by a whopping 62 to 38 percent margin.

Gov. John Kasich (R) took office in January vowing to curb unions' power. But he appears to have overstepped his hand in curtailing the rights of 350,000 public workers — including firefighters and police officers — to negotiate over benefits, equipment and other issues.

It is a gross failure also, for the entire Republican Party, the Tea Party, and for many independent conservatives.

So why not tell the truth, the whole truth, and nothing but the truth? So, would you not be helped by God?