Anita Crane
Who's the racist now?

August 21, 2009
With his reaction to the arrest of Henry Louis Gates, President Obama diverted attention from his ill-formed healthcare agenda by throwing racism into the mix. We all know how that turned out and since the American people were not silenced, Obama's fans in Congress and media are trying to brand us as bigots. But when will pundits at the New York Times, the Huffington Post, and MSNBC question Obama's part in a real federal case of racism? 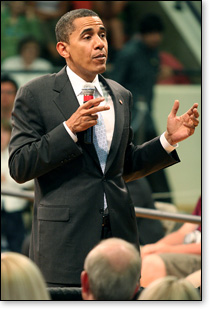 Lest we forget, Obama's attorney general, Eric Holder, condemned the United States as "a nation of cowards" who discriminates against its black citizens. In that Black History Month speech, Holder also promised, "[T]his Department of Justice, so long as I am here, must and will lead the nation to the new birth of freedom so long ago promised by our greatest president." However, under Holder the Justice Department is helping the Cherokee Nation of Oklahoma (CNO) to expel its own black citizens, the descendants of Cherokee slaves known as "Freedmen."

According to our 1866 Treaty with the Cherokee Nation, Cherokee Freedmen and their descendents "shall have all the rights of native Cherokees." These rights include voting in tribal elections, per capita representation in Cherokee government, as well as assets and benefits bestowed by the U.S. Department of the Interior through its Bureau of Indian Affairs (BIA).

Since the treaty can be abrogated only by an act of Congress, in 2007 Rep. Diane Watson (D-CA) introduced a bill to cease federal funding of the Cherokee Nation until the Freedmen's rights would be restored. She also requested support from presidential candidate Sen. Barack Obama (D-IL.). As reported in The Hill, Obama refused in 2008. In part, he replied, "Discrimination anywhere is intolerable, but the Cherokee are dealing with this issue in both tribal and federal courts." Watson's bill died with the 110th Congress. Nevertheless, Obama's golden opportunity has arrived. The 1866 Treaty, a supreme federal law, says the president of the United States "is hereby authorized and empowered to correct such evil."

Likewise, over the centuries, the Cherokee Nation has attempted to disenfranchise its black citizens. Under Chadwick Smith, principal chief since 1999, the matter has come to a full-blown crisis because he claims that the Freedmen have no tribal rights unless they can prove Cherokee blood through the federal government's Dawes Rolls.

From 1898 to 1907, the scene for racism was set by government agents who took the Dawes Rolls to determine members of the Cherokee Nation. Jon Velie, lead counsel for the Cherokee Freedmen, explained that those agents took it upon themselves to segregate people according to perceived race. "As a result," said Velie, "the Freedmen were subjected to Jim Crow laws and other forms of state-sanctioned discrimination."

Still, under Smith in 2003, the Cherokee Nation of Oklahoma denied certain Freedmen their right to citizenship, and others with Cherokee voter cards were physically blocked from the polls. Smith was reelected and an illegal ballot measure was passed to remove federal oversight of amendments to the Cherokee Constitution.

Therefore, Marilyn Vann established the Descendants of Freedmen of the Five Civilized Tribes Association in Oklahoma City. She and numerous other black Cherokees filed a 2003 federal lawsuit against Secretary Norton in the same court that settled the Seminole case.

Ironically, like many Freedmen, Vann has Cherokee blood. She said, "I am a person of mixed African, Cherokee and Chickasaw descent. As a Freedman, my citizenship is guaranteed by the Treaty of 1866. But Chief Chad Smith uses some of the Cherokee Nation's hundreds of millions of dollars to file frivolous lawsuits against the Freedmen and block the progression of our federal lawsuit."

Smith, a lawyer, and his attorneys have tediously delayed the Vann case. He and the Cherokee Nation of Oklahoma were inserted as defendants. Meanwhile, the BIA permitted violations to the 1866 Treaty. Then, after Vann and her fellow Freedmen won a Dec. 2006 hearing, Smith and the CNO filed an appeal.

In May 2008, five hired guns, including Cherokee Nation contract lobbyist and lawyer Lanny Davis, represented Smith and the tribe in the U.S Court of Appeals for the District of Columbia. In July 2008, Judge Thomas Griffith issued the court's decision that Vann, et al, may proceed with their lawsuit against tribal officers, but a district court must determine whether they can sue the Cherokee Nation itself.

Griffith wrote, "Denying the Freedmen the right to vote in tribal elections violates the Thirteenth Amendment and the 1866 Treaty, so the Cherokee Nation cannot claim tribal sovereign immunity against a suit complaining of such a badge and incident of slavery. ... The tribe does not just lack a 'special sovereignty interest' in discriminatory elections  it lacks any sovereign interest in such behavior."

Currently the case is pending against Interior Secretary Ken Salazar and Smith.

Nevertheless, 11 days after Obama was inaugurated, Justice Department lawyer Amber Blaha filed a hefty motion to dismiss the Vann case. So the court's decision could disenfranchise an estimated 25,000 black Cherokees and their descendents, but Eric "New Birth of Freedom" Holder hasn't withdrawn the motion to dismiss it.

In 2007, the Cherokee Nation of Oklahoma further breached the 1866 Treaty with a constitutional amendment expelling its Freedmen.

Freedman Raymond Nash, a resident of Nowata, Oklahoma, who earns his living as home improvement contractor, voted against the amendment via absentee ballot.

After the vote, the CNO registrar sent some 2,800 black Cherokees notice of tribal disenrollment, indicating they had 30 days to send a written appeal. When 386 replied, the CNO filed a class-action lawsuit in its own District Court of the Cherokee Nation as Raymond Nash v. Cherokee Nation Registrar.

Nash said, "People had been calling me and asking what this case is. I said, 'No. It can't be me because I don't know [any]thing about this.'"

The CNO court provided an attorney to represent Nash and the other so-called plaintiffs. When that attorney was disbarred, the court appointed Ralph Keen II, a 2003 tribal council member. Keen said the suit was filed according to tribal law. He also admitted, "I'm not sure they [the Freedmen] realized anything because the notice that was mailed out by the Cherokee Nation did not offer a good description of the legal appeal process." Jon Velie said Nash didn't receive notice until two years after the CNO filed this suit in his name. Keen said he notified the Freedmen 30 days prior to the July 17, 2009, hearing for summary judgment and the Cherokee court's decision is pending. Keen also said, "And if we prevail, we could literally render the two federal actions moot."

Evidently, filing the tribal case in Raymond Nash's name wasn't pleasure enough for Smith and his collaborators. On Feb. 3, 2009  the same day that Holder took his oath of office  the Cherokee Nation of Oklahoma filed a federal lawsuit against Nash and four other black Cherokees, plus Secretary Salazar, in the U.S. District Court for Northern Oklahoma. Again Velie said the Cherokee Nation didn't notify Nash or his fellow defendants, but he found out and took up their case. In other words, the unsuspecting black Cherokees could have lost rights for all Freedmen as soon as they failed to show up in court. Furthermore, Mike Miller, communications officer for the CNO, didn't dispute Velie's claim.

Keen has petitioned the court to intervene for the Freedmen in this case, but Velie opposes it as another CNO attempt to be on both sides. In May, under Holder's nose, anti-Freedmen Justice Department lawyer Blaha filed as Salazar's defense attorney. The case is stalled as all parties await court decisions.

Considering the Freedmen's plight, on April 30, 2009, Rep. Diane Watson and six other U.S. representatives, including John Lewis (D-GA), sent Attorney General Holder a letter requesting that he launch a full investigation. So far, Holder has not replied.

Excluding the Freedmen, Mike Miller estimates 290,000 Cherokee citizens. He said, "Congress has unilaterally shredded many aspects of the Treaty of 1866 and one of those aspects had to do with the treaty rights of non-Indians." He also said that federal courts "have specifically stated that non-Indian freedmen descendants do not have the right to citizenship in the Cherokee Nation."

As noted above, federal judges of the Vann case have ruled precisely the opposite.

Thus, on June 8, Watson introduced a House bill to sever government relations between the United States and the Cherokee Nation until the CNO restores full tribal rights to its Freedmen.

Watson's bill threatens losses of at least $380 million in annual federal funding to the CNO, $5 million in stimulus funds, plus the other assets and benefits. In March, when Smith testified before a House appropriations subcommittee, he referred to the 1866 Treaty to bolster his request for a $40 million increase to cover health services in 2010. Yet according to Smith's agenda, and despite ever increasing Cherokee casino revenues ($441.2 million in 2008), Freedmen would be ineligible. In fact, one Freedman in the Vann case was denied treatment for glaucoma until she got legal assistance. And on the CNO website, Smith decries Watson's bill as an injustice to the needy, but he expects Obama to do nothing for the Freedmen.

No wonder. On June 15, President Obama rewarded the rogue Cherokee Nation by announcing the new position of senior policy advisor for Indian Affairs. He appointed Kimberly Tehee, a Cherokee, and said, "[S]he will provide a direct interface at the highest level of my administration."

Now, under Eric Holder, the Justice Department is trying to prove his absurd notion that the United States is a nation of cowards. Blacks in Nowata tell 62-year-old Raymond Nash that there must be a reason he's the Cherokee Nation's sacrificial Freedman. Indeed there is reason and President Obama has the lawful power to end it. New York Times, Huffington Post, and MSNBC, do tell us: Who is a racist?