June 20, 2012
Every once in a while one hears a comment so idiotic, so utterly mindless, yet so emblematic of a particular group's thinking, that it at once crystallizes both the speaker's and the group's warped vision of a subject. Such is the transcendent character of the phone statement made by Vagina Monologues author Eve Ensler to the Associated Press regarding a controversial series of events wherein two Michigan lawmakers were barred from speaking in the Michigan House over their choice of words in protesting a proposed law which pro-abortion and radical feminist forces see as a threat to their most treasured agenda. 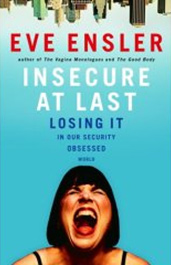 This legislation is designed to put in place new insurance and licensing requirements for clinics; ban abortions 20 weeks after conception except when the procedure would save a woman's life; make it illegal to coerce a woman to have an abortion; set guidelines for disposing fetal remains; and regulate the prescription of RU-486. The legislation, HB5711, was introduced on May 31, and passed by the House Committee on Health Policy last week.

Lawmakers Rep. Lisa Brown(D) and Rep. Barb Byrum (D) claim that they were barred from speaking because of their use of the words "vagina" and "vasectomy" respectively during their respective protests. GOP House leaders claim that these women were barred because they compared the legislation to rape and did not exhibit nor practice proper decorum and professionalism.

A press release by The Women Lawyers Association of Michigan argues that the women "were neither vulgar n or disrespectful" and added that "when the minority is silenced, justice cannot prevail and democracy suffers." The group claims to not be taking a position on the bills in question, but on the lawmakers' free speech rights. The immediate irony is that these people are demanding greater freedom of speech for a minority while demanding the right to permanently silence unborn children, who are the most voiceless minority of all.

The Real Agenda and Strategy

Regardless of what these women actually said during their debate of this legislation, the GOP House leaders have fallen for an increasingly familiar tactic of pro-abortion and radical feminist forces. This tactic, employed in the Sandra Fluke mess and its resultant "slut" protests, is to divert attention from a pro-abortion issue by wailing against a greater, generalized attack or "war," against women.

Fluke was forcing an institution to contradict and ignore its own moral dictates by providing her with subsidized contraception under the guise that contraception is a health aide for women when, in fact and common sense, logical analysis dictates that its main use is to allow unfettered sexual encounters with a reduced risk of pregnancy. While contraceptives may have some medical uses, the fact remains that preventing pregnancy is by far their main purpose and that they have been known to cause health problems themselves, thereby compromising the notion that they are always beneficial to health. By framing an attack on religious liberty as a defense of women's health, pro-abortion forces sought to divert the public's attention from the absurd and blatant nature of their argument. Likewise, these pro-abortion and feminist forces have paraded out a movement which seeks to capitalize on Rush Limbaugh's "slut" comment during the Fluke affair by proudly rallying women to "Rock The Slut Vote."

The Fluke, "slut" and, now, "vagina" crusades all follow a pattern as predictable as it is simplistic and superficial. In all three cases, women have capitalized on harsh rhetoric by framing that rhetoric as a defensive response to attacks on women's free speech and privacy, and desperately tried to marshal women against this "assault" or "war" on women. The utter absurdity, hypocrisy, and sheer superficiality of this pathetic partisan ploy is clearly seen in the failure of these very same pro-abortion and feminist forces to protest forced abortions in China, violence against women in the Muslim world, and gender-based abortions here at home. If these people really cared about protecting women against violence and harm, they would speak out as forcefully against these three situations as they do in support of the abortions they hold so dear. Apparently, when the Left itself and its international friends are the ones victimizing women, there is no "war on women" to be seen by these hypocrites but all hell breaks loose when some woman is prevented from blatantly and graphically using body parts to punctuate her arguments.

Predictably, Ensler has been praised as a cross between Gloria Steinem and Jane Austen, but many argue that The Vagina Monologues is nothing but a vulgar, degrading, and debasing trivialization of women which pretends that shocking people and condemning men will ever have any impact on the terrible reality of violence against women. If someone can explain how reducing women to their sexual organs and ignoring the great things women have achieved with their intellect, creativity, and spirit is honoring and defending women, please do so.

It seems to me that any woman who demands respect by using vulgarity or recognition as a human being by denying the unborn fetus that very same recognition needs to re-assess her strategy as well as her mentors.

"If we ever knew deep in our hearts that the issue about abortion ... was not really about fetuses and babies, but really men's terror of women's sexuality and power, I think it's fully evidenced here," Eve Ensler

So, according to Ensler, abortion is not about the millions of unborn children dismembered and discarded out of personal whim and convenience over the past 40 years but, rather, merely about keeping women in their place. While the sheer stupidity of this statement boggles the mind, what is perhaps most incredible about this drivel is that it somehow manages to disrespect and dehumanize the unborn even beyond their disposal like so much trash. In a sense, this statement reminds us that the unborn are so utterly invisible, meaningless, trivial, and completely inconsequential to Ensler and her ilk that she does not even grant them the courtesy of being important enough to defend in their own right. I am truly stunned by how shallow, despicable, and utterly heinous this statement truly is. In addition, Ensler's spew will have us believe that the millions of women who oppose abortion must likewise be terrorized by their own power and sexuality? As is often seen by their own attacks on pro-life women, these forces mock and ridicule pro-life women as somehow either stupid, brainwashed, or pseudo-men when it is they who project inane logic and arguments, mindless adherence to twisted arguments, and a pathetic tendency to present women's road to success as founded in the kind of carefree sexuality without pregnancy with which they see men as unfairly blessed.

It would be foolish for anyone to conclude that Eve Ensler is stupid given her statement above. No, the mantle of stupidity is rightly reserved for those geniuses in the media who are allowed to finger paint across momentous national, international, social, and moral issues simply because they host a daytime show where they can spew their insignificant views and ask the most inane questions. Like it or not, we are living in a society which holds stupidity sacred, defends absurdity, and glorifies vulgarity.

It would be likewise foolish for anyone to conclude that this is all about decorum and vulgarity. Yes, it would be nice if we lived in a world where these things mattered but reality dictates otherwise. If truth be told, Ensler and her friends are pathetically insecure enough to pretend, and perhaps pretend enough to believe, that spewing female body part names in our faces demonstrates or perhaps even grants them any power. If this shrill exercise does endow any power, we are to blame, for like the proverbial victim of the heckler, we embolden the offender by granting that offender the power to offend.

Ironically, this is all very much about power or, more accurately, the perceived lack of , and insecurity regarding, that power. In typical Leftist fashion, pro-abortion and radical feminist forces complain when they feel threatened with losing, and losing they are. An increasing number of Americans are joining the millions who already reject much of the pro-abortion and radical feminist agenda. Aided by the American Pravda which consistently exaggerates their influence as it trivializes pro-life efforts, Ensler and her friends craft the fiction that most women accept and agree with their warped perspective of womanhood and pregnancy.

Lori Lamerand, president and CEO of Planned Parenthood Mid and South Michigan has openly mocked the sincerity of the legislation's supporters' claims that they care about women's health, conveniently ignoring her organization's own lack of sincerity in dealing with an increasing trail of financial, medical, and ethical breaches. Lamarand has also argued that the bill is unclear, undefined, and a disastrous contradiction destined for failure, conveniently ignoring her own side's increasing trail of vague inconsistency.

In the final irony, Lamerand spews her side's own feeble logic in arguing that "the only time this legislature has any focus on women is before they're born. Once that happens all bets are off."

By admitting that an unborn child can be a "woman" before birth, Lamerand has unwittingly stated the obvious that her side so pathetically scrambles to ignore and hide. Namely, that the unborn child is, indeed, a woman or a man in the making and as such deserves protection.

In the final analysis, the best way to combat these folk's efforts to divert the discussion and debate from the evil of abortion to concocted attacks and misogyny against women by pro-lifers is to avoid their insidious free speech and privacy traps. So, let them yell "vagina" until they are blue in the face because, unmasked of their pretexts and diversions, at the end of the day, these folks are peddling nothing more than insecurity, selfishness, and hypocrisy, and America knows it.