Gabriel Garnica
When America's good dies, it will because of the left's trouble with Paris 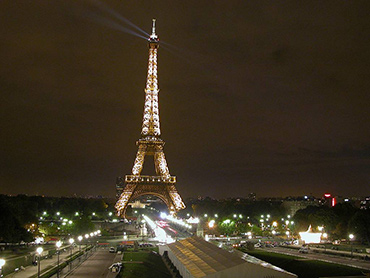 When good Americans die, they go to Paris. -Oscar Wilde

Let me begin by assuring you that this article has very little to do with the city of Paris, which is tied in only at the very end, and then only indirectly. I recently stumbled upon Wilde's famous line about The City of Light when the idea struck me that the word PARIS is a good memory aide for five hypocrisies suffered by the Left. I apologize beforehand for the resulting twist on Wilde's phrase which titles this piece, but I could not help myself. If nothing else, this mnemonic aid will be difficult to forget.

P......The Left bashes profiling, the categorization and grouping of people according to superficial and usually observable traits or characteristics, often race or nationality, as inherently sinister, evil, destructive, and useless. While everyone agrees that profiling must be constantly scrutinized to avoid unfair and inaccurate stereotypes and abuse, there is no escaping the fact that in some form, being able to categorize and analyze distinct groups of people allows us to individualize, customize, and address the needs and particularly unique traits of such groups. In fact, we all profile on a daily basis in some way. The Left demonizes profiling by profiling the process of profiling itself into the neat evil of unfair racial profiling. In fact, profiling, when effectively and carefully applied, can be a rational and effective way of providing structure, order, justice, and sanity to society. Thanks to the Left's misguided, and hypocritical, trashing of the general concept of profiling, we have situations where a school will not isolate 45 trouble makers from good students because, as it happens, 38 of those students happen to share some common trait the school will feverishly try to ignore lest it be accused of unfairness or bias. Imagine police describing a bank robber as " a man wearing a blue jacket" rather than a more detailed description lest someone be offended by the profiling involved.

The irony, and hypocrisy, of course, is that while the Left bashes those who profile in ways it deems offensive, it readily and even gleefully profiles Christians, conservatives, pro-life supporters, homeschoolers, and any number of groups it finds annoying at best and repulsive at worst. The present leadership lumps its opponents into sweeping groups amid broad, and often irresponsibly inaccurate and unfair, labels with impunity, with the expected support of the same pathetically biased and hypocritical mainstream media that will bash any similar forms of profiling applied against its favored groups. As a proud Latino American citizen who has lived in this country legally for nearly 50 years, I still cannot understand how Hispanic political, social, educational, and media leadership often profile the Right while accusing them of profiling Latinos. I also scratch my head every time fellow Latinos living legally in this country argue that racist conservatives lump all Latinos together as illegal aliens while marching with illegal aliens in protests and demonstrations as well as defending them daily in the media.

A.......The Left kneels at the altar of autonomy in declaring that the government has no right to put restrictions on a woman's right to choose abortion or not, but apparently has no problem having doctors probing women's bodies to do so, much less caring about the often unsafe conditions of abortion clinics, as seen by the way the media either ignores or covers up such instances of women being mistreated in such places. Likewise, the Left waxes poetic about freedom and privacy, but somehow forgets to continue waxing when the freedom of parents wishing to put their kids in charter schools, or the privacy and freedom of parents who wish to homes school, are involved. According to the Left, people have the right to privacy and freedom to abort their child, but not to avoid disastrous government-run healthcare initiatives, or to avoid paying taxes for things they find morally offensive. What would the Left say if a law was passed forcing them to pay taxes to support pro-life programs?

R......The current obsession and craze with redistribution flies in the face of research, expert analysis, and history demonstrating that such mindless efforts merely shrink the whole pie rather than more equitably distribute it. When the successful, who often create opportunities and expansion for the less successful, are punished for their success, they stop succeeding so much. Why will I break my neck to create a business if I am going to be blasted by a leadership which, by the way, profiles me as somehow evil or exploiting others? Why will I build anything if that leadership will accuse me of not building it in the first place or, perhaps worse, attribute my success to everyone but me? The fact remains that, as is the case with every one of these points, the Left seeks to redistribute things in line with its agenda and philosophy only, and not necessarily in line with the good of the puppets of the day it chooses to use as excuses or victims to save. If the Left is so enamored with redistribution, why is it so against, for example, allowing parents and children to redistribute themselves across schools they wish to attend and, instead, is so determined to force people to attend the schools the Left promotes?

I.......Closely tied to redistribution, of course, is the Left's twisted and hypocritical obsession with attacking so-called inequality. In fact, the implication of the Left's efforts to redistribute things is to supposedly eliminate inequality. However, once again, reality in the form of objective research and analysis as well as history shows that enforced redistribution more often than not leads, not to great equality but, rather, to more intensified and complex inequality, resentment, bitterness, and division. Imagine a teacher who, feeling it unfair and unequal that some students receive poor grades and others achieve good grades, decides to punish those who do well and entitle those who do poorly. Common sense dictates that, pretty soon, the good students will not try so hard to be good and the poor students will certainly enjoy being poor students. In the end, good students will never help poor students, the teacher will not be able to handle all the poor and good student issues that will result, and the whole classroom will become a circus. What the Left either fails to, or stubbornly refuses to realize is that inequality based on personal efforts, initiative, and responsibility is legitimate inequality. Of course, we know that the Left promotes redistribution pretending to fight inequality but, in truth, merely creating a grateful and eternally dependent and passive constituency ready to anoint the Left as its messiah. Rather than eliminating unfairness and inequality, the Left ends up institutionalizing it for its own benefit while painting itself as the eternal warrior fighting against it. I never said hypocrisy cannot be genius in its own sinister way.

S...Ultimately, this whole argument is about sacrifice and personal responsibility. This great nation was built on the backs of those who proactively carved out their future, actualized their teeming potential, and grabbed the proverbial bull by the horns to mine this awesome country's many blessings. The Left, however, is creating a society which sees sacrifice as a personal and moral insult, which is more reactive than proactive, and which increasingly demands entitlement rather than merit. More and more, we are teaching our future generations, and our present one, to complain rather than explain, to accuse rather than solve, and to sit on our behinds rather than go to our knees in work and prayer.

Paris, the City of Lights, is an ironic memory aid for these five areas of hypocrisy by the Left because, at the end of the day, these points only demonstrate how much the Left is truly in the dark and, as a result, how blindly those who support it will bring this once great nation down. In the meantime, should we ever forget some key areas where the Left shows its hypocrisy, we will always have Paris.