December 31, 2008
The Associated Press is classy, indeed. They can't even keep sniping at Sarah Palin out of a story announcing the blessed birth of her grandson. Ah, but wait, it gets even more annoying because not only did the AP snipe at Palin in its first birth announcement story, but once called on it, the AP went back twice to rearrange the piece, rewriting history to make it seem as if they never sniped at her in the first place. 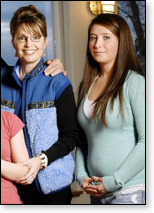 Initially, the AP attacked Palin in its very first paragraph saying that daughter Bristol's pregnancy was the thing that caused Palin's candidacy to "go downhill." At 7:20 PM the AP gave us this: (Bold my emphasis)

ANCHORAGE  The teenage daughter of Alaska Gov. Sarah Palin, whose quest for the vice presidency began to go downhill the day she announced the pregnancy, has given birth to a son, a magazine reported Monday. Bristol Palin, 18, gave birth to Tripp Easton Mitchell Johnston on Sunday, People magazine reported online. He weighed 7 pounds, 4 ounces. Colleen Jones, the sister of Bristol's grandmother, told the magazine that "the baby is fine and Bristol is doing well."

Downhill? The AP is saying that the daughter's pregnancy is what caused everything to flop? Then, why did Palin's acceptance speech  a speech that happened days after the pregnancy announcement  get as many viewers on TV as Obama's historic acceptance speech? Sure it was a momentary controversy, but it had practically no affect on the candidacy.

But, apparently the AP thought better of the "downhill" verbiage. A little later, the AP rewrote the first paragraph. So, at 9:28 PM, the AP altered it to this: (My bold again)

ANCHORAGE, Alaska (AP)  The teenage daughter of former Republican vice presidential candidate Sarah Palin has given birth to a son months after the announcement of her pregnancy became one of the first dark clouds to swirl over the Alaska governor's candidacy.

Not much better, is it?

Yet, not but a short time after the first rewrite, by 10:30 PM, the AP got rid of the downturn point altogether and this was the result:

ANCHORAGE, Alaska  The daughter of former vice presidential candidate Sarah Palin has given birth to a son, a magazine reported Monday.

That's quite a turn around. We start the reporting with the harsh "downhill" comment, next we see it softened to "dark clouds" swirling, and lastly we don't see any value judgment at all.

Now THAT'S some example of the evolution of a report, isn't it?