Cynthia A. Janak
The truth about the HPV vaccines or what they do not want you to know (Part 4)

June 19, 2010
As I promised, I will be answering the question "Why is my daughter so sick now when she was always so healthy before the vaccination?" This question is asked of us so many times that we have lost count a long time ago. This is a resounding concern expressed by all the parents that we have been in contact with over the years.

In the webinar with the FDA we examined the reports presented to the FDA by Merck and GlaxoSmithKline. Let us begin.

In the final close-out document presented to the FDA called "Clinical Review of Biologics License Application Supplement," September 11, 2008 (2) there are several things that are noteworthy.

First of all, the placebo used in the Gardasil trials was not a true saline only placebo. What is referenced as a placebo in these studies is actually the carrier solution of the vaccine.

The reporter of this study starts on page 5, end of paragraph 3 in the Executive Summary to state: "New medical conditions which have been reported since vaccination, as well as follow-up safety data for study HPV-018 out to Month 30, the saline placebo controlled study in children 9-15 years of age, were included in this review..."

Again on page 13 the reporter does it again: "study HPV-018 (safety and immunogenicity profile) in pre-adolescent girls and boys as compared to a true saline placebo."

Throughout this document it states that in study protocol 018 that they used a saline placebo. If you go to the original documentation presented to the FDA for approval in June of 2006 (1) you see that there is a different type of placebo for this study group. Although in several places it does state a "saline placebo." You decide what the truth is. 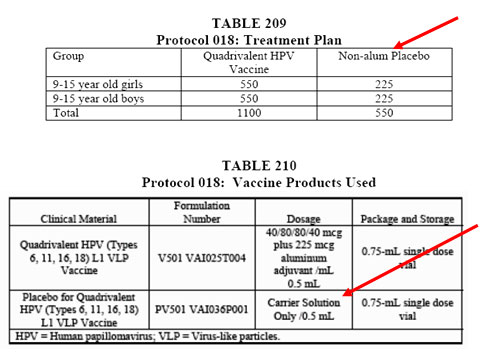 In table 20 above they mention that the placebo was a carrier solution. What this means is that the VLP (virus like particles) from the HPV and the alum (aluminum = amorphous aluminum hydroxyphosphate sulfate adjuvant) were the only items not included. What is included in the carrier solution is the sodium chloride, L-histidine, polysorbate 80, sodium borate and water for injection.

Let us go on, we have a bit to cover.

When analyzing this table it shows that 73.3 percent of participants that received Gardasil acquired a new medical condition; from flu-like symptoms to paralysis. The concern is that approximately ¾ of the female target population in this study suffered from some type of "new medical condition" as a result of the vaccines. In the standard population if ¾ of the females experienced a "new medical condition" this would increase medical costs for families including uninsured medical visits and diagnostic, and lab testing. We know of many, many families that are now struggling because of the out of pocket expenses that they have to pay for because of their daughters medical bills. I have been in contact with a father from New York that told me that he has spent around $100,000. Who is profiting here? You answer that question. 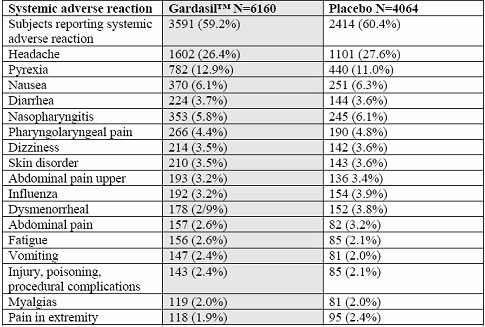 Let us get away from Gardasil for a moment and switch our focus to Cervarix. This next table is taken from the "Briefing Document" dated September 9, 2009. (4) 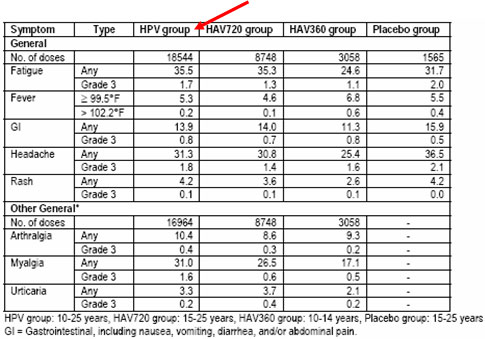 The concern is that these are termed "solicited" meaning that approximately one third of the participants were expected to suffer from these adverse events.

Let me give you a breakdown of the numbers given above. The total HPV group had 18,544 doses and with three doses administered to an individual means that there were 6119 participants. This breaks down to 2020 participants or approximately 1/3 of the participants suffered from these "expected" conditions in the study group.

The 'other general' category includes 16,964 doses administered to 5598 participants. Meaning that 1847 participants or approximately 1/3 had a reaction. 31% suffered from myalgia as a solicited symptom.

So GSK knew that 33% of the population would experience one of their solicited symptoms. Wouldn't you think that this would be mentioned somewhere on the insert for the vaccine? NOT!

Also, Merck knew that 73% of the population would experience one of their new medical conditions. Wouldn't you think that this would be mentioned somewhere on the insert for the vaccine? NOT!

That just goes to show you how much information the doctors receive from pharmaceutical companies. Why do you think this information was not present? Let us go to Merck's own website and see what is in their pipeline. http://www.merck.com/research/pipeline/home.html?WT.svl=mainnav

I placed these in this table because these are symptoms that the Gardasil Girls and now Boys are experiencing.

I would review all that GSK has in the pipeline but they are too numerous to mention so just go to the link to see all the goodies that they are getting ready for you. It all starts on page 2 of this pdf. http://www.gsk.com/investors/product_pipeline/docs/GSK-product-pipeline-Feb-2010.pdf

Cervarix numbers only reflect day 1 to 7 for the reporting time period. No numbers were available for day 1 to 15. If the reporting was for an extended period of time similar to Gardasil, probability dictates these percentages may be much higher.

For the most part Cervarix elicits a much higher percentage of adverse events in the initial days after inoculation over Gardasil. The comparison suggests that Cervarix is not as safe as Gardasil. (Pun intended.)

It is noticed in this table that high percentages of fatigue, headache and myalgia are reported. These symptoms may also be initially construed as the flu and not Cervarix related and therefore would not be reported as an adverse event related to the vaccination until the symptoms persist past the one week time frame for flu.

To finish part 4 I am going to show you an analysis that was done which was based on a report from the CDC on number of administered HPV vaccines in the United States.

Population numbers from the 2007 and 2008 census were taken along with the percentages from the CDC document to ascertain the approximate number of adolescents vaccinated. The chart indicates that 6,533,460 received at least one dose of Gardasil (HPV4). 17.9% or 1,877,190 received all three doses. Subtract that from the total that received at least one dose and the balance indicates that 4,656,270 girls never completed the series.

The concern is that this population of young women could have developed a 'new medical condition' and therefore discontinued the series. There are many parental accounts to back up this theory. We requested that the FDA perform an immediate follow-up by an independent entity to determine if indeed the series was discontinued on the basis of the development of adverse reactions or a 'new medical condition.' Our fear is that many of the vaccinated girls and boys are being misdiagnosed because of the diversity of symptoms elicited by these vaccines.

The percentages presented regarding the potential high adverse reaction rates for Cervarix have the potential for an even higher discontinuation rate. These two facts directly impact the health care system and a family's personal finances. This has the potential to be an economic catastrophe in the making.

I need to apologize for not giving you the analysis of the VAERS (Vaccine Adverse Event Reporting System) but this article is long already. I do promise that part 5 will have the in-depth analysis of these reports. I will also answer the question: "After reporting my daughter's reactions to VAERS (Vaccine Adverse Event Reporting System) I became curious to see how many other girls are like my daughter. There are so many I am now afraid my daughter will not get better."

Arthralgia  means joint pain;[1][2] it is a symptom of injury, infection, illnesses (in particular arthritis) or an allergic reaction to medication.[3] http://en.wikipedia.org/wiki/Arthralgia

Myalgia  "muscle pain" and is a symptom of many diseases and disorders. The most common causes are the overuse or over-stretching of a muscle or group of muscles. Myalgia without a traumatic history is often due to viral infections. Longer-term myalgias may be indicative of a metabolic myopathy, some nutritional deficiencies or chronic fatigue syndrome. The most common causes of myalgia are overuse, injury or stress. [1] However, myalgia can also be caused by diseases, disorders, medications, as a response to vaccination [2] http://en.wikipedia.org/wiki/Myalgia

Urticaria  a kind of skin rash notable for dark red, raised, itchy bumps. Hives are frequently caused by allergic reactions; however, there are many non-allergic causes. For example, most cases of hives lasting less than six weeks (acute urticaria) are the result of an allergic trigger. http://en.wikipedia.org/wiki/Urticaria