June 11, 2012
This past weekend at the Miracle League Field http://caseysclubhouse.org/ my daughter Chloe met up with her good friend Shawna (can the photo be attached or linked?). As I watched these 2 beautiful girls talk and play together I could not help but think of the way many in our culture view children with different ABILTIES as defective. Currently 90%+ of children diagnosed prenatally with Down syndrome are identified and terminated, and Shawna's mother was told by several medical "professionals" to "reduce" Shawna from her pregnancy based on her "diagnosis." The Light these 2 little Angels bring into the world is brighter than anything I have ever witnessed, and there is a beacon of undefiled goodness and pure love emanating from the Miracle League Field during every game. I wanted to share Shawna's mother's story below so that hopefully people will wake up to this silent eugenic prenatal movement that is occurring across our globe. Our world is rapidly crossing the point of no return on a slippery slope which is eliminating our most precious resource — human beings. Now more than ever our world needs children like Shawna and Chloe, and if their mothers had listened to the culture of death and "reduced" their pregnancies this priceless friendship would have never occurred. Please take a few minutes to read and share this very disturbing story. 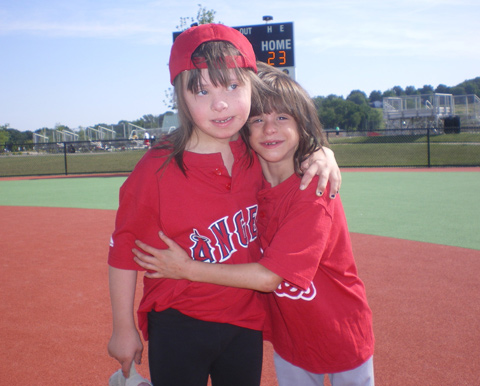 Shawna has a condition called Tetrasomy18p. I had four doctors who talked to me about why I should consider reducing my pregnancy. I had a CVS done when I was about 10 weeks along and preliminary results showed that Shawna had Trisomy 18 and that it was a fatal condition and highly unlikely that she would survive in utero and because she would carry so many complications if I chose to continue on I would also put her twin brother in jeopardy of miscarriage. We were immediately given information as to how I could reduce my pregnancy that week if I desired so as not to present further complications to her twin. After about 2 weeks the official test results came back that verified that Shawna did not have Trisomy 18p but rather a condition called Tetrasomy18p. I remember asking a specialist "Well what does that mean" and the doctor said it was very rare and they didn't know much about it but that he could only assume that it would be even worse than Trisomy18p because there were now two extra chromosomes. At that point I was about 13-14 weeks and I was again reminded that I could reduce my pregnancy and the longer I waited the more I jeopardized losing Shawna's twin brother. I felt so pressured that I even made the appointment to have the reduction but the more we thought about it the more I just knew it was not the answer. We were just very, very scared and the medical profession kept offering us an "easy way out" of the challenges of caring for a disabled child. We were never given positive information during this time — only given a case description that provided worst-case statistical data. After much soul searching and listening to the voice in our heart rather than the voice in our ears, my husband and I decided that our babies' fate was in God's hands and if He meant for both of them to make it, they would. With that decision made, I saw another high-risk specialist (4th doctor) who again gave me worst case news and when I told him that I was not going to terminate, he seemed rather bothered that I wasn't listening to him and he told me, "There are no guarantees that you won't lose both babies. The only thing I can guarantee you is that your baby will be anything but normal." At that point I was the end of my rope, I found another high risk group and firmly told them that I made the decision to carry both babies, and that I understood the risk and if they weren't going to respect that to let me know because I will move on to another doctor that does. Finally I found a doctor who said he would support my decision. I teamed up with that group and a very supportive geneticist and going forward from there I had a relatively easy and problem free pregnancy. During that time also I did research and found out that none of these children had any expected shortened life span and in fact there were adults with the condition who were thriving. Even in the hospital when I was in labor, I felt the need to constantly remind the nurses that Shawna was to be treated with the same amount of care as any other baby and that if any risks were presented that her life was just as worthy to me as her twin brother 's life was.

Thank God I didn't jump the gun and act upon that "easy way out" — yes at times she can be challenging, but aren't all kids? I am so very grateful that we didn't terminate our blessing from God. Yes she carries a few of the traits that was on that long list of statistical data that I was originally given — but that list also excluded a lot of other important traits like that she would have an adorable smile, or be incredibly good at hugging, or very kissable and funny, or have the ability to constantly amaze me at her determination and strength, or her ability to make me laugh and beam with pride — that list goes on and on far more than the list I was originally given at the doctor's office. But of course no one mentions that...