January 18, 2014
The Endangered Species Act (ESA) of 1973 expressed concern that many of our nation's native plants and animals were in danger of becoming extinct, and under the ESA species may be listed as either endangered or threatened. "Endangered" means a species is in danger of extinction throughout all or a substantial portion of its habitat. "Threatened" means a species is likely to become endangered within the foreseeable future. The law's ultimate goal is to "recover" species so they no longer need protection under the ESA. When the ESA was passed few if any people realized a unique group of human beings would be in danger of becoming extinct due to another piece of 1973 legislation.

The 1973 Roe v. Wade U.S. Supreme Court decision affirmed the legality of a woman's right to have an abortion under the Fourteenth amendment to the Constitution. Prior to the passage of Roe v. Wade there were no prenatal tests to determine Down syndrome and these beautiful human beings with an extra chromosome were just beginning to make progress toward full inclusion in our culture. Prenatal genetic testing has advanced rapidly since the passing of this 1973 legislation, and currently 90%+ of individuals identified prenatally with Down syndrome are targeted and aborted which clearly makes them a prenatal endangered species. This silent prenatal eugenic movement receives very little coverage, and with a 90%+ termination rate isn't it time we add "Down syndrome Human Mammals" to the same list as the African Elephant, Banner-tailed Kangaroo Rat, Ear-spot Squirrel and Gray-handed Night Monkey? Should we not begin to "recover" these priceless people before all are exterminated?

My amazing daughter Chloe was born 40 years after the 1973 Endangered Species Act and Roe v.Wade became the law of the land, and she represents one of the less than 10% of people with Down syndrome who survive from being a prenatal human species to a postnatal human species. If Chloe was an endangered rat, squirrel, monkey or elephant with a 90%+ termination rate she would be quickly moved from "threatened" status to "endangered" status and receive full legal protection and attention. As I have watched my daughter and many others like her spread purity, unconditional love, honesty, and light into a lost culture of death, I am firmly convinced that the devil utilizes the instrument of abortion to prenatally eliminate a species of human beings he cannot corrupt, destroy or lead into darkness. What would the world look like if we had more people who are not capable of malice or inciting intentional evil, and what impact would they have on the rest of the human species who are "disabled" with hate, violence, deception, anger, and destruction?

As genetic testing rapidly advances isn't it time we pass a Prenatal Endangered Species Act (PESA) to ensure the instrument of abortion does not cause the extinction of individuals our misguided world labels "defective"? One day soon the endangered species categories may include autism, ADHD, OCD, depression, dyslexia, shortness, brown eyes, and the list goes on and on.

QUESTION: Which Endangered Species receives full legal protection – A prenatal Down syndrome child or a rat? 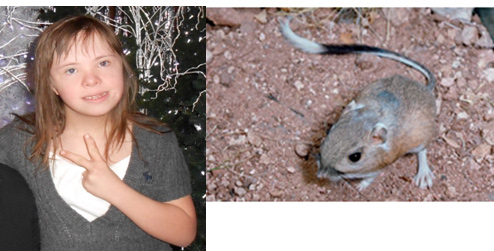