December 8, 2016
In the classic Christmas film "It's a wonderful life" George Bailey is an honest man living in small town whose life seems so desperate that he contemplates suicide. George's guardian angel intercedes as he prepares to jump from a bridge showing him how dark the world would have been if he had never lived. The movie clearly shows how one life can make an amazing priceless impact on the lives of countless people. 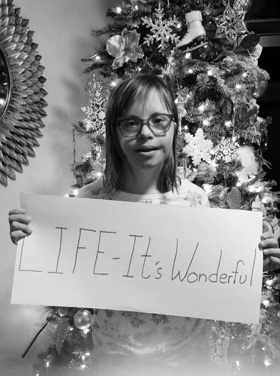 Christmas is the time of year we celebrate and focus on the One Life, Jesus Christ, who entered this world bringing the gift of eternal life to a lost world preoccupied with temporal things. God's Word is clear on when Life begins – Jeremiah 1:5 "Before I formed you in the womb I knew you, before you were born I set you apart," and God's Word clearly shows how wonderful each Life is that God creates – Psalm 139:14 "I praise you because I am fearfully and wonderfully made; your works are WONDERFUL." Saving Human Life for eternity is the reason Jesus entered this world, and without Life there can be no hope.

We live in a culture where we target and terminate 3500+ of our most vulnerable and defenseless children each day and there are no pauses in this slaughter for Christmas, weekends or holidays. Since 1973 we have ended the lives of 58+ million innocent citizens of our nation, and how many teachers, doctors, nurses, mothers, fathers, sisters, brothers, daughters, sons and other wonderful lives are missing due to the ultimate abortion lie that it is OK to exercise choice to end the LIFE of your child.

The physical, mental, emotional and spiritual wreckage caused by the instrument of abortion is THE ISSUE of this generation and isn't it time to end this massacre? Many would have said 2000 years ago that the unborn baby boy of an unwed, pregnant Jewish teenager from an impoverished Roman occupied town in a male dominated culture had no chance for a Wonderful Life, and if planned parenthood existed and Mary had sought advice we can conclude that abortion would have been the preferred choice for the King of the Universe.

During the week between Christmas Sunday this year and New Year's Sunday there will be over 24,000 precious children slaughtered in the our country, and as we start 2017 wouldn't it be wonderful if our nation makes restoring the sanctity of LIFE the top resolution for the New Year. At Human Coalition we understand the urgency of this American Holocaust, and please join us as we work to make abortion unthinkable and unavailable: https://www.humancoalition.org/