September 15, 2010
It has been about 30 years since I read Reverend Ralph Abernathy's book on Martin Luther King and others in the Southern Christian Leadership Conference, To Preach the Gospel to the Poor. Abernathy told the whole story about Jesse Jackson and his lies about being with MLK when King was killed. My Part II will have more to report about "Reverend" Jesse.

Abernathy was viciously traduced by many Blacks for his disclosure of King's liaisons with a number of women  a sordid story, not pertinent to this article. Abernathy has written another, expurgated, book, The Walls Came Tumbling Down, clearing surrendering to the pressure to vitiate history by leaving-out some of the actualities published in his first book.

I once owned Abernathy's first book, but in my multiple changes of location, it has been misplaced. I still have his second book. I tried to find a copy of To Preach the Gospel to the Poor. Guess what!? It has disappeared, as though it never existed. I have checked every book-seller outlet (new and used), and there is not a single copy available.

However, in order to confirm that I did not imagine the book's existence, I found that there are four locations in the U. S. where the book can be read: Wisconsin Historical Society, Madison, WI 53706; Emory University, Robert W. Woodruff library, Atlanta, GA 30322; Hofstra University, Hempstead, NY 11550; and New York Public Library, New York, NY 10018

I remember having seen Rev. Abernathy interviewed by Bryant Gumbel, when Gumbel was a belligerent hot-shot T.V. personality. Gumbel was openly furious with Rev. Abernathy, declaring that he had been a traitor to the cause. Gumbel told him, "When the legend conflicts with reality, promote the legend," or words to that effect. With dignity, Rev. Abernathy told Gumbel that he was not answerable to legends, he was answerable to the truth  a higher morality.

In an article by David E. Smith, Illinois Family Institute (IFI) Senior Policy Analyst, Smith cites a column written by Jesse Jackson for the Chicago Sun Times. In it, Jackson shamelessly writes that "Right-Wing Christians" should have no legitimate role in government. Conservative Christians are guilty, Jackson wrote, of "bad theology" and "bad democracy." 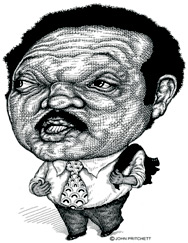 In another fascinating article in the Presbyterian Layman, by Mark Tooley of the Institute on Religion and Democracy, April 11, 2000, Tooley describes Jackson's diatribe at a recent Chicago event called the Religious Communications Congress.

Jackson referred to conservative Christians as fascists. He said they exploit race and preach hate. He criticized conservatives for favoring tax-cuts, charter schools, and student vouchers. Ironically, leaders of the charter schools and student voucher solutions to the failures of public schools to educate have been Blacks. Jackson has contempt for these leaders because they have not come weeping to the leftist-establishment Jackson and his cronies, like Al Sharpton. In fact, some Black leaders are outspokenly opposed to what they call the "Liberal Plantation."

Author Tooley describes some of the "faith stories" presented at the Religious Communications Congress. "Each day's program was begun with a sacred 'story of faith.' The first day, rabbi Lynn Gottlieb presented a feminist version of the Genesis creation story. (Interesting that Gott-lieb means "Lover of God" in German.)

"Amid song and dance, Gottlieb told of Adam creating 'God in his own image.' In Gottlieb's extra-biblical legend, someone named 'Lileth' preceded Eve as the first woman. But Lileth refused to submit to Adam sexually. So she left the Garden of Eden and became the first divorced woman. God went on vacation, but sent His angels to retrieve a recalcitrant Lileth, and told her that 'her name would be mud' if she did not return. Thereafter Lileth became known as a 'bitch and witch,' becoming a prototype of feminism.

"The second day's story teller was a Hindu from West Virginia named Any Fraenkel. 'I worship Govinda,' he began. Fraenkel went on to declare that 'there are over 1,000 names for deities in India.' He led the audience in chanting to god Govinda: 'Govindam Adi Purusham, Tanaham Bhajam Mi,' meaning 'I worship the primeval Lord Govinda, source of all.' He also led the crowd in chanting to the god Ram: "Sri Ram Jai Ram, Jai Jai Ram,' meaning 'Victory to the all glorious Ram, who is the Supreme Enjoyer.'"

"Then, on the third day, the morning's sacred story was told by...Dayton Edmonds, a Native American of the Caddo nation and a retired missionary with the United Methodist Board of Global Ministries. "Edmonds told a lengthy Native American story about the 'earth mother....' He later explained in a workshop that story telling is a 'weaving of truths and untruths.' It is up to the listener to flesh out the story, and the story changes with each telling. 'Never moralize stories.... What is truth for one is not necessarily truth for another,' Edmonds stressed. 'All stories are true and some of them even happened.'"

Tooley relates that Jesus Christ was virtually unmentioned at the congress. And, when references were made to God, He was called He/She. He informs us that the congress was sponsored by the Presbyterian Church, U.S.A. Other sponsors of the congress were the National Council of Churches, Church Women United, the Unitarian Universalist Association, the Greek Orthodox Archdiocese of America, the Lutheran Church-Missouri Synod, the General Council of the Assemblies of God, the National Religious Broadcasters Association, Maryknoll World Productions, the Catholic Press Association of the U.S. and Canada, the Baha'i International Community, the Islamic Society of North America, the International Society for Krishna Consciousness, the Soka Gakkai International (Buddhist), the Church of Christ, Scientist, the Association of Unity Churches (New Age), the United Religion Initiative, and the Church of Jesus Christ of Latter-day Saints (Mormon).

Thus, a Corybas and Bacchus, inclusive of all things theology that Jackson can appropriate is legitimated for political involvement. Only those of the "bad" theology are anathema. Proving once again  as if we needed additional proof  that Jesse Jackson is a humbug, who refers to himself as a Christian "Reverend." He is a peacocky, peremptory, patronizing, presumptuous, pugnacious poseur  the self-serving patron saint of panderers  who pretends that pagan polytheism, pantheism, "community- organizing" and animism are reciprocal with Jesus Christ.

In a future article, I will acquaint you with the quacksalver (i.e., in French, sorcier wizard, magician, sorcerer, conjuror, warlock) curriculum vitae of Jesse "Jackstraw" Jackson, detailed by writer Kenneth Timmerman in his "damn the torpedoes, full speed ahead," irreverent exposé of the faux reverend.

Jackson is a consummate virtuoso senza virtù of aversive-conditioning by transparent threat...a liar, a thug, and a jive-turkey. And, oh yeh! His favorite desert is fourberie pie.