May 15, 2011
Persons have the right to their position on Lieutenant Colonel Terry Lakin's decision. I support his conscientious determination, foursquare. Some of my dear friends are less sure than I that a military person sworn to obedience has the right to such a decision as he made.

I respond to them that perhaps they should give further thought to that specific oath which he swore. His oath was essentially to the Constitution of the United States and not to a man. Especially if there is a question as to whether that man is properly constituted to be serving as our commander in chief.

Back in the 18th century, our founders conveyed such as the following to King George III: "Dear King, You have elected to impose gross injustices upon your subjects here in the colonies. We strongly objected and you reacted with force. It is our conclusion that that system of justice so necessary to liberty and the protection of our rights has been corrupted by you, and has, thus, been broken by your actions against us. We, now, choose to respond to your force with equivalent, righteous force."

2010: The system of justice once protected by America's founding documents has been broken by Barack Hussein Obama and his regime of so-named "Progressive" fascists. As citizens of this nation, Under God and under the Rule of Law, not mere subjects of some distant colony, we have the obligation to fight back when we are regarded as mere subjects under the rule of an Autocrat, of Constitution- revising lawyers and judges, and illegitimately anointed czars.

I saw a woman yesterday wearing a shirt that asked "Are you a lover or a fighter?" I wanted to ask her what that means to her? I didn't have the opportunity. My answer to her would be, "I am both a lover and a fighter." I will fight for that which I love. "Greater love hath no man than to give his own life for another." This is Love. And, sometimes, as in our military, it involves a fight to the death, and, hopefully, victory for our Nation under God.

If our system has come to the point of allowing Dr. Lakin to be treated as he has been treated by our government and its courts, then the system has been deliberately corrupted. It is broken. We are obliged to correct this. Honor, Loyalty, Semper Fi!

Two more of our courageous Arizona Border Patrol Agents were killed on May 12th, near Gila Bend, AZ, in pursuit of those who illegally entered the United States in contravention of ALL of our laws. http://www.myfoxphoenix.com/dpp/news/local/2-border-patrol-agents-injured-in-train-collision-05122011 It is sad to say, but true, that our Federal Government has been aiding and abetting those who are entering our nation illegally. 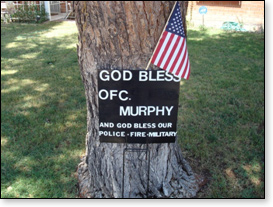 "At approximately 1:30 a.m. Wednesday, May 26, 2010, Phoenix police Officer Travis Murphy and his partner Officer Jillian Mahlmeister responded to a call for service in the area of 19th Avenue and Fairmount. Tragically, during a search for a suspect in the area, Officer Murphy received several gunshot wounds and died after being taken to a nearby hospital. He leaves behind his wife and two small children.

Information was received regarding a hit-and-run incident near 19th Avenue and Fairmount. The suspect had hit another vehicle, then parked his vehicle in the carport of a vacant house and fled on foot. When the officers arrived at the scene, they each began to search for the driver of the vehicle. Officer Murphy located a suspect at which time shots were fired and Officer Murphy sustained several gunshot wounds. He was taken to a nearby hospital where, tragically, he died.

The search for the suspect continued and a short time later was located by a Phoenix police K-9 and taken into custody. The investigation is continuing."

God protect those in our police and military who daily fight to protect us by defending our neighborhoods and our borders. They love liberty and justice under the rule of law. And they love their compatriots. This is why they fight and why some lose their lives in the battle — and why we who love must fight against the enemy, no matter who they are, and no matter their address.