May 31, 2009
Like global warming, swine flu and everything else wrong in the world, racist, sexist, and homophobe Rush Limbaugh is largely responsible for who I am today. In 1993, I had a great job as Art Dept. supervisor at an ABC affiliate TV station in Baltimore. The same station where Oprah was co-host on our morning show, years earlier.

While minding my own business, my favorite radio talk show host was replaced with Rush Limbaugh. I thought, "Who is this wise guy?" A week later, I was hooked. 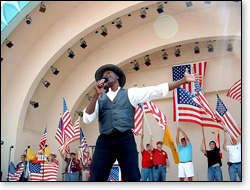 Unapologetic, Rush courageously and boldly said everything I felt. Rush became my HERO! At that time, middle-aged folks were being let go because of company down-sizings. The ever optimistic Rush encouraged folks to view their termination as a opportunity to pursue their dreams.

HR had just awarded me my 15 years of service "gold pin." I had 15 more years to go to retire. Inspired by Rush, I told my wonderful wife, I wanted to quit my job to pursue a music career full time. My amazing wife said, "Let's go for it!"

We were broke for the next 15 years. Five years ago, we were homeless. However, as weird as this may sound, we are grateful for our incredible journey. We grew from whiny kids, to grateful adults. We learned to trust God for EVERYTHING! Today, we are living our dreams. Awesome!

None of this would have happened had I not been inspired and encouraged to believe in myself and the greatness of America by Rush Limbaugh.

Something else I truly admire about Rush is his courage to stand up for what he believes. Case in point. When his fans tried to pressure Rush into supporting Ross Perot, Rush said, "There's something not right about this guy." Rush was right.

Folks, Rush especially, but you can include Hannity and Beck, are getting pretty beat up by the media, Dems, and even Republicans. It is extremely critical that we stand by these guys. We need these brave patriot generals, if we are to win this battle against secular progressives and America-hating leftists who seek to remake America in their own vile image.

Let's continually let Rush, Hannity, and Beck know, "Hang in there brothers, WE GOT YOUR BACKS!"