June 22, 2009
Friends invited Mary and me to spend Father's Day with them at Disney. Upon our return home that evening, my 82-year-old dad called. He said, "I am now ready to go home to be with the Lord, Jerry preacher the Father's Day sermon today!" Dad proudly added, "He hit a home run!" 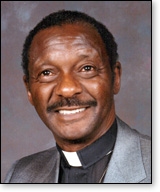 Jerry is one of my middle brothers. I'm the oldest. Then, there is Gloria, Jerry, David, and Allen.

Two years ago, we were all extremely concerned for Jerry  due to his alcoholism, depression, and even possible suicide. We have all gone through our "stuff." I struggled with alcoholism for 19 years. I've been sober over 20 years, thus far. But, dad told me when we were born, he prayed over each of us, "Lord, if this child is going to die and go to hell, take it now."

This has been a banner year for the Marcus family. My brother David won "Coach of The Year." Allen won "Police Officer of the Year." I'm having an awesome year traveling all over the country speaking and performing my "American Tea Party Anthem." And, Father's Day 2009, Jerry preached. I have shared with you that in the early fifties when dad broke the color barrier into the Baltimore Fire Dept, despite racism and horrendous treatment, dad won "Firefighter of the Year" two times.

These Marcus family blessings testify to the influence of my dad and mom on our lives and the faithfulness of God. Happy Father's Day dad, you richly deserve it!