June 28, 2009
I just watched the classic movie "High Noon," AGAIN! Gary Cooper played a brave sheriff who brought law and order to his town. As one woman said, "He made it safe for a decent woman to walk down the street". A recently released outlaw was coming back to town on the noon train to deliver vengeance against the sheriff who put him away. His gang of three arrived early to help their leader take out the sheriff. Fully aware of why the bad men were in town, the sheriff could not arrest them because they had not broken any laws. Waiting is not illegal.

Desperate, the sheriff interrupted a church service to solicited help. After much debate, the ungrateful town folks declined. They even suggested the sheriff "get out of town" hoping the trouble would follow him. The sheriff contemplated their recommendation. He began saddling his horse, but something inside would NOT allow him to run away. Heroically, the sheriff faced the bad guys and WON! 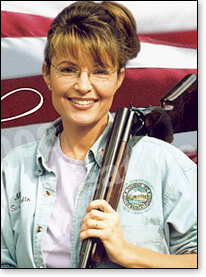 I thought of another strong, gutsy, bold, stand on principles hero, a woman, Sarah Palin in her own modern day version of High Noon. Sheriff Palin rode into America Town on a white horse with conservative guns blazing and saved a dead McCain campaign. She brought hope to weary and battered conservative town folks and gave them a reason to vote.

She bravely stood tall and rode high in the saddle while ungrateful, weak kneed republican town folks ran for cover, hid in their homes and peeked nervously through the curtains.

Why is Outlaw Obama and his gang so committed and desperate to destroy Palin? Could it be they recognize her destiny, like Mose, to set her people free? And why is she so despised by them? Obama's gang hate Palin for all the reasons we LOVE her. Sheriff Palin is a good, decent and strong character driven conservative leader. Palin also believes in God. Such humility and virtues are as repulsive to liberals as showing Dracula the cross.

Something that sticks in the craw of lib women is in their youth, they brought into the feminist rhetoric, "women's liberation means no husband and family." Tragically, they find themselves aging and alone. Meanwhile, this CONSERVATIVE woman has it all, great career, fine family and a husband who loves and respects her. Adding insult in injury, Sheriff Palin looks mighty fine in her jeans.

Recently, the libs sent an old washed up gunslinger, the Letterman Kid, to challenge Sheriff Palin to a shootout. Palin planted two bullets between the pathetic old dude's wrinkly eyes before he could un-holster his gun.

Despite Sheriff Palin's courage and willingness to fight, Outlaw Obama and his posse rule America Town. They are in the process of taking over EVERYTHING! Obama took over the livery stable and banned horses. While he and his posse continue riding horses, we town folks are forced to ride miniature ponies.

But in the spirit of what has made America Town great, an uprising is a brewin'. A HUGE conservative posse is building daily. Our first battle will be in 2010 to win back America Town's House and Senate. Then, in 2012, God willing and the creek don't rise, Sheriff Palin will lead us to VICTORY in the battle of Little Big Washington DC. Years earlier, another great lawman cleaned up America Town, Sheriff Ronald Reagan.

After Sheriff Palin sweeps out the Obama gang, perhaps once again, we will be as what Sheriff Reagan affectionately called us, "a shining city on a hill."