Lloyd Marcus
When will white America be off the hook for sins of the past?

July 8, 2009
Scalpers peddled tickets to a black man's funeral on eBay for $10,000 each. Oprah, a black woman, is the richest and most influential woman in America and possibly the world.

Did I mention that the president of the United States of America is a black man? With blacks only 13% of the U.S. population, none of these extraordinary black achievements could have happened without tremendous support from white America. 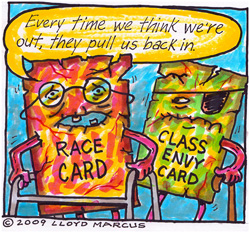 So, when will white America be off the hook for sins of the past? When will Democrat pitchmen and women, such as Janeane Garofalo, cease selling the myth that America is a racist country? When will affirmative action  which basically says blacks have been screwed in the past, so now it is fair to screw whites  end? When will so-called black leaders, such as Rev. Jeremiah Wright, quit poisoning the minds of blacks with hate and victim-hoodism by preaching that America is controlled by racist rich white people? What else has to happen for the "BIG LIE" to end?

As ridiculous as this sounds, the U.S. Senate lead by Democrats apologized for slavery. I guess as a black man, this is suppose to make me feel good. The resolution, said it was important for Americans to apologize for slavery "so they can move forward and seek reconciliation, justice, and harmony for all people of the United States."

Well excuse me, but what the heck have we as a country been doing for the past 150 years? America has "moved forward" in every way. What a crock of touchy feely politically correct yada, yada.

This silly irrelevant apology is all about "reparations" more commonly known as "gettin' paid." While the Senate's apology carried a disclaimer that this will not lead to reparations, Democrats are fighting to change that. I am so sick of Democrats buying black votes with checks and handouts which keep them dependent.

The hideous thing about this scam is that it further sends the message to young blacks that being born black in America comes with "issues"; you're a victim and somebody owes you something. If these politicians truly gave a hoot about young blacks, they would be empowering them with the truth. "You are blessed to be born in the greatest land of opportunity on the planet, America! Education, hard work, and doing the right thing will get you where ever you want to be."

I remember when the "Star Trek" TV series hit the airways. I LOVED that race was not an issue among the multi-racial expert crew. But how can we get to that level, if the very people who claim to care the most about racial harmony continue playing the "race card" whenever it serves their selfish political purpose?

A very ugly thing is going on in America. Due to a lack of education regarding our history, the Constitution, and what has made America great, politicians are extremely successful spewing divisive rhetoric, entitlement, victim-hoodism, and class envy. "Hate the rich! Hate Whitey! Vote for me! I'll give you their stuff! I'll MAKE them do right by you!" Totally disgusting! This is NOT my America.

Still, God has a remnant, a band of patriots growing in strength and numbers to take back our country. Though my heart is heavy, my faith and hope are STRONG. We WILL renew and restore America!