Lloyd Marcus
Conservative rapper featured in "Feet To The Fire," a new song by Lloyd Marcus 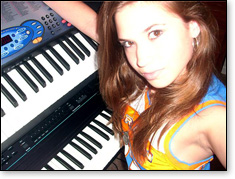 If I sound like a proud uncle, I am. Not by blood, but by my relationship with Sarah's family and her dad, master music producer/engineer Frank Starchak. Frank is the producer of my national "American Tea Party Anthem."

When Sarah was six, she sang on my "Amazing Grace" project. I am grateful that Sarah has grown into a young lady with her head on straight. Hopefully, she will follow in the footsteps of another "Sarah" from Alaska who is also brilliant, beautiful, and conservative.

"Feet To The Fire" is my newest musical contribution to the Tea Party Movement. The song challenges ObamaCare and alerts politicians that we will no longer tolerate their betrayal of the principles on which they were elected. With Obama's spending effecting the future of Sarah's generation and beyond, I thought it appropriate that "Feet to the Fire" have broad generational appeal.

Sarah and I will debut the song performing it LIVE Aug. 22nd at the Orlando Tea Party.