December 8, 2009
I was in Texas performing at a tea party rally (singer/songwriter of the American Tea Party Anthem). While waiting for my wife, I wandered into the hotel pub. It was Lady's Night. A cowboy practically had a line of women waiting to dance with him. He held them firm, but gentle. He confidently lead and they gleefully followed. Each knowing she was in good hands. I, along with others, by the looks on their faces, thoroughly enjoyed watching him dance with the women. Why did we enjoy it? It represented the way men should be and how women want them to be. Despite what the radical feminists say, women want men to be strong and confident without being jerks. It is called Biology. 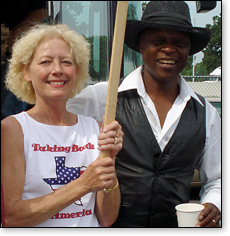 Is chivalry dead? Have we conservative men allowed political correctness to prevent us from treating women the way we instinctively know we should? When my three brothers and I started dating, my dad instructed us. "You take good care and return her home the way you found her." Following dad's instruction made us feel good about ourselves. We felt like men.

It is time we conservative guys start acting like men and defend our women folk (a little cowboy lingo). Since her acceptance speech as McCain's VP nominee, attacks on Sarah Palin have been vile, extremely vicious and beyond the pale. Even Palin's family including her 14 year old daughter were targeted for destruction by an, dare I use the "E" word, evil media. The Left's hatred of Sarah Palin is good vs evil. Palin's book tour is pouring gasoline on the Left's "destroy Palin at any cost" fire. Governor Palin positively represents motherhood, marriage and traditional Christian values. The Left appears to despise any and all things wholesome.

Unfortunately, it appears even some on our side (conservatives) have bought into the media's "she is not too bright" portrayal of Palin. When Obama says we have 57 states and other faux pas, his sycophant media circle the wagons around him by saying he is tired or simply misspoke. Meanwhile, every word out of Palin's mouth is viewed from the template that she is stupid. Who amongst us could withstand such harsh scrutiny.

Well, I am standing up for my awesome conservative sister, Gov. Palin. She has the right stuff to get our country back on track. I love how Palin boldly, without apology, challenges the concept of government run health care, the global warming/climate change scam and her desire to drill for oil to make us energy independent. Talk about backbone. Could Sarah Palin be the reincarnation of John Wayne and Ronald Reagan? No, I do not believe in reincarnation; just having a little fun. My point is despite what the snobby elites, conservative and liberal, think, Sarah Palin is a powerful force to be reckoned with and is great for America.

We the people are so sick of mamby pamsy "middle of the road speak" focus group tested candidates. "Don't say this because you will offend this crowd and don't say that because you will offend the other." For crying out loud, just say what you mean and mean what you say. Show us voters who you are. These are the kind of candidates we voters are longing and tea partying for. And this is why Sarah "what you see is what you get" Palin is a rock star!

I believe strong women inspire men to be strong. They are not offended when we open the door for them, carry their heavy packages and mind our conversation around them. Or has such behavior from men become too "Andy and Mayberry" for our secular progressive crude culture? Trust me, I am not a prude, but radial feminists have diminished women's power in our society. I was raised a real man treats women with a level of respect. Nobody is allowed to "dis" your momma, wife or your sister.

Sarah Palin is a breath of fresh air; a woman using the God given power of her femininity to be a mom, a wife and govern a state. Awesome. I would be honored to say, "Yes, Madam President."

Not only is the Left committed to keeping women in their place, but blacks as well; all the while claiming to desire progress and liberation for both. Blacks who achieve success without liberal programs and intervention are beaten down and dragged back to the Left's government dependency plantation. Such uppity independent blacks are strapped in a chair, deprived bathroom privileges and shown videos 24/7 of Sharpton, Jackson and hypocritical rich America hating rappers. The deprogramming message, "America sucks! Racist! Sexist! Homophobic! Liberal democrats are your saviors!"

The Left is equally intolerant of independent thought coming from women. The Left deceptively call their pro abortion a pro choice movement. If choice is their issue, why are radical feminists so offended when a woman chooses not to have an abortion? They have a weird anti male (particularly white male) and family agenda. Outrageously, a feminist leader said "all sex is rape". These angry bitter women have a distorted view of the world.

Then along comes Sarah Palin; happily married, a happy mom and effective governor. Feminists should regard Sarah Palin as their hero; a shining example of women's liberation enjoying success in both words, family and career. But instead, the Left seeks to destroy her. Palin is too happy, too good, too pretty, too effective, and most intolerable, too powerful.

I wish to encourage my fellow conservative men to display a little John Wayne type testosterone and defend our feisty conservative women folks. As I am a conservative singer/songwriter, I have penned, performed and recorded a song honoring conservative women titled, "Our Girls". Along with nationally known women like Sarah Palin, Ann Coulter, Laura Ingram, Michelle Malkin, my song is a tribute to all my patriot sisters that are fighting for the cause of freedom, liberty and conservative principles. Please give "Our Girls" a listen. I promise, it will make you smile.

Listen to "Our Girls": http://www.youtube.com/watch?v=IFb3zW7-tU4