April 5, 2010
I cannot begin to tell you how honored and blessed I feel to be on the Tea Party Express tour and a part of a team of extraordinary people. Sarah Palin and Joe the Plumber are names you know. You may not be familiar with Tea Party Express singer/songwriter Diana Nagy.

Tea Party Express receives huge media coverage around the world. Understandably, singers and speakers all over the country want to be a part of our team. The beautiful and talented Diana Nagy has been touring and supporting our troops and America before it was cool. This is Diana's third Tea Party Express tour. Prior to these tours, Diana performed on three national tours in support of our troops. For Diana Nagy, these tours are about serving and saving our country.

Recently, Diana was honored by the U.S Navy. She was asked to perform her original song, "Where Freedom Flies" at the commissioning ceremony of the USS Independence. Diana wrote the song in honor of her uncle who was one of the last fighter pilots shot down in WW II.

At each Tea Party Express rally, we do a special tribute to our military which includes Diana singing her "Where Freedom Flies." Adversity has a way of revealing one's true character. In Topeka, Kansas Diana awoke to realize she had no voice. She had the option of not performing her song for the veterans in attendance at our rally. Diana felt compelled to express her gratitude to our veterans by performing a less than perfect version of her song rather than not at all. She was a hit. What a true American and classy lady.DianaNagy.com

PROTESTERS: There have been a few protesters at each of our Tea Party Express rallies. The most (around 15) were at our kick off rallies of the tour in Searchlight, NV. Interestingly, they all had professionally printed signs. It kind of makes you wonder if they were hired protesters from "Mobs-R-Us." The left always accuses us of the tactics they employ.

House Majority Leader, Nancy Pelosi said we tea party protesters are funded "astroturf." Not true. It is quite the opposite. I chatted with a retired school teacher in Tulsa, Oklahoma who spent $20,000 to print bumper stickers which he is giving away. That is true passion driven patriotism. Ms Pelosi, 99.9% of the signs at our rallies are homemade by Americans who love their country.

ABOUT OUR BUSES: We have three Tea Party Express tour buses wrapped in our logo, tour map and photos of our team. One of the buses was used by Roland Reagan. Each bus has two lounge areas with flat screen televisions and satellite TV, bunks, a kitchen and a restroom.

We just finished our rally on the capitol steps in Little Rock, AR. I am on the bus. We have about a 250 mile ride to our next rally in Tupelo, MS. Talk to y'all soon.

"Confessions of a Black Conservative" 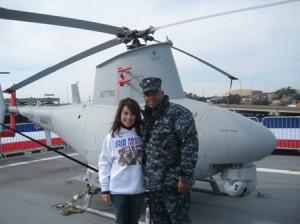 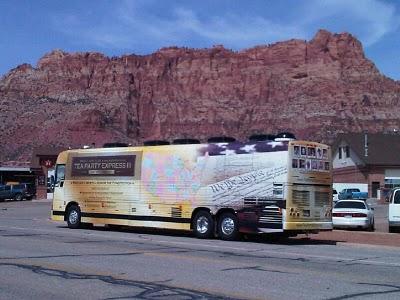