March 18, 2011
I always think, "How can I explain this so that my brother David will understand." Don't get me wrong, David is extremely bright. I consider David in that group of Americans who do not listen to talk radio, watch Foxnews or follow politics closely. David works hard, coaches children's football and raises his family. David's political news consists of catching sound bites here and there from the liberal mainstream media. 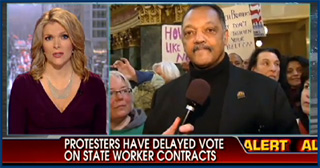 People like David are being "played" by Jesse Jackson and his ilk. Jackson's latest despicable attempt to "play" the American people happened during a Foxnews interview in Wisconsin. His comments regarding Gov. Walker, the Republicans and the protesters were filled with absurd cliches and lies.

Whenever Jackson opens his mouth, regardless of the facts or the situation, Jackson paints images of poor people suffering, children suffering and people being disenfranchised. It's the 1950s civil rights struggle all over again. http://www.youtube.com/watch?v=NJqmH8J_62U

At our next family event, he will question, "Hey bro, why are you hangin' with those hateful, mean and racist republicans and tea party people?"

Injustice and bad guys "gettin' over" bugs me. Americans who are mildly paying attention to politics are being "played" by Jesse Jackson, the democrats and the liberal media. Appalling.

As I said, injustice has always bothered me.

Seventh grade, Miss Hornet's English class test. I leaned over to Barbara Jean's desk asking to borrow a pencil. Miss Hornet saw me. She assumed we were cheating. Refusing to hear any explanation, both our tests were thrown into the trash. I was extremely angry. Not for myself. I was devastated by the injustice of Barbara Jean failing the test and having her integrity stained despite her complete innocence. She had not responded to my request to borrow a pencil. The guilt I felt was overwhelming.

Lets delve into a few of Jackson's lies. Before I go on. I realize calling Jackson a liar may appear a bit harsh.

On CNN, I called NAACP, chairman Ben Jealous a liar for saying he saw signs reading "Lynch Barack Obama and Eric Holder" at tea parties. If such signs existed, the liberal media would have made sure the signs went viral. No one has seen these signs except Jealous. Thus, the man is a disgusting racial hate inciting liar.

I believe Jackson and company are intentionally distorting the truth, misleading, manipulating and abusing the American people. They have been getting away with it for far too long. It is time they are called out and held politically accountable.

Even The Prince of Peace and Love called out evil, "You serpents, you generation of vipers, how can you escape the damnation of hell?" Wow! Folks, that is a pretty strong rebuke. I don't think such a statement would pass the liberal media and democrat's civility test.

In his Foxnews interview from Wisconsin, Jackson "played" good natured Americans like my brother David by tugging at their heart strings with lies.

Jackson said the protesting Wisconsin teachers are suffering in pain, losing their jobs; their homes in foreclosure with nowhere to go. Good lord, that Gov. Walker surely must be an cruel evil republican tea party SOB!

Despite Jackson's best efforts to portray them as such, the Wisconsin teaches are not poor peasant workers rising up with pitchforks fighting for a crust of bread from their evil overlord.

Jackson said the protesting teachers' homes are in foreclosure. Not true.

Jackson said the protesters are workers who have lost their jobs. Not true. As a matter of fact, Gov. Walker is trying to save their jobs.

In a nutshell, Jackson's rant was HOGWASH! Jackson was "playin" my brother David and all of the hard working decent Americans who are busy earning a living, raising their families and are not really paying attention. Totally disgusting. The man has no shame.