September 30, 2011
Tuesday, I flew up to New York from Florida to appear on a Wednesday 7:15am segment on the Fox News channel's Fox & Friends. Typically, CNN & Fox send a car to drive me to a studio in Orlando. This was the first time I had to fly to New York to be "live" on the set.

Mary booked my hotel in Queens so I would be close to the airport. Fox would send a car to take me to their studio in the morning and back to my hotel afterward. 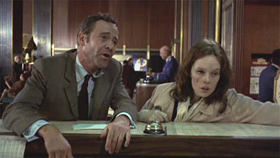 Remember that old Jack Lemmon and Sandy Dennis movie when his wife accompanied him to New York for a job interview and they became horribly lost? I got horribly lost in Queens trying to get to my hotel. I laughed at myself, after all these years, trying to morph into my old streets of Baltimore "don't-mess-with-me" body language.

It was around 7:30 pm and the streets were mobbed with people going in all directions. Seeing me lugging my suitcase and computer bag over my shoulder, one of two urban-attired black guys chatting stopped and asked, "Cab?" Totally frustrated, I said, "Yes." Insanely, I followed this stranger to a dark parking lot. He had an SUV. He delivered me to my hotel for 10 bucks. I gave him twenty. But, our encounter was divinely inspired. I scheduled him to drive me to the airport the next day after my Fox appearance.

This young black man was smart, a good guy, and loaded with potential. We chatted about business, unemployment, and other things around the fringes of politics. I never felt led to tell him, "Obama sucks."

The young black driver gave me a wonderful compliment. He said he had never driven anyone who talked and made him feel good the way I did. Thus, confirming I was exactly where God wanted me to be, doing what He wanted me to do — encouraging this young man and hopefully assisting in pointing him in the right direction.

When he dropped me off at the airport, I gave him a copy of my CD album, "American Tea Party." Whenever I go to New York, I will give "my driver" a call.

On Fox & Friends, I was part of a three-person panel discussion hosted by Gretchen Carlson, a very nice lady. The program producer emailed me the day before with a list of topics on the agenda for discussion — none of which were the continuing charges that the Tea Party is racist.

With the NAACP, CBC, and black actor Morgan Freeman calling the Tea Party racist, I felt God's number-one purpose for having me on national TV was to be a "black voice" defending the great people of our divinely inspired Tea Party movement.

During the break before our final segment, I asked Gretchen if she would give me an opportunity to address the racism charges against the Tea Party. Remarkably and graciously, Gretchen said, "yes." It was a "God Thing," thanks to all of your prayers.

Here is the link to view the segment. http://www.youtube.com/watch?v=QIEzsfREMAQ&feature=email

I realize we are facing challenging times ahead. Obama will probably raise a billion dollars for his re-election campaign. Still, I believe we, the Tea Party, will overthrow his evil regime come November 2012. How? "If God be for us, who can be against us."