Lloyd Marcus
America desperately needs a hero: but who?

February 12, 2012
Stunned Americans are questioning, "Why would Obama, in an election year, boldly trash the first amendment, forcing Catholic institutions to provide birth control, abortion drugs and other contraceptive services which goes against their faith?" These baffled, naïve people still do not get it. First and foremost, Obama is a hard core leftist hater of America, as we know it. He is laser-focused on implementing his vowed fundamental transformation of America into a socialistic, secular progressive Disneyland. 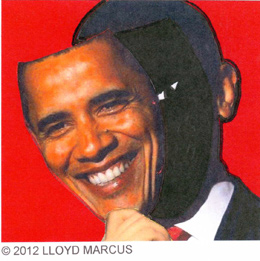 As proven by their gleeful willingness to exempt Obama from the usual vetting process during his 2008 presidential campaign, the liberal mainstream media has given Obama every reason to be confident in their cover and support as Obama ignores the Constitution to fulfill his anti-America anti-freedom agenda.

For three years, we have witnessed Obama slowly peeling off his well-crafted "moderate" mask. Our first glimpse of the real Obama was his unprecedented government hostile takeover of private secular auto companies and bullying banks to accept government bailouts.

Then, despite a majority of Americans screaming "No!" to Obamacare, Obama basically said "screw y'all" and forced the passage of his health care bill. A Rasmussen poll that week showed that 55% of Americans wanted it repealed. It did not matter. The king had decreed it so. Displaying off the chain arrogance and dictatorial power, Obama's enforcer, Nancy Pelosi ruled, "We have to pass the bill so you can find out what is in it." Yes, even democrats who voted to pass the bill were clueless regarding it's content. Obama revealed a little more of the man behind the mask.

Due to my commitment to make my point as concisely as possible, I will not list Obama's unprecedented overreaching power grabs, trashing of the Constitution and crimes against individual freedoms. Let's just say, Obama has revealed two thirds of his true face. What we are seeing is more horrifying than anyone could have possibly imagined.

If un-repealed, Obamacare will literally give this man (Obama) power to dictate which Americans live or die — that is, total control of our lives. Lord help us. Only God should have such power.

My black centenarian grandmother cried tears of joy when Obama was elected. Ironically, her hero's government controlled health care which will be rationed, equals a death sentence for my grandma if she needs an expensive procedure. Economist Thomas Sowell points out that government health care will not reduce the cost; it will simply refuse to pay the cost. The sick, the elderly, and the disabled will suffer the most when they ration care. Obama blatantly suggested a senior might consider taking a pill rather than having surgery. http://www.youtube.com/watch?v=U-dQfb8WQvo

Clearly, Obama feels embolden to do whatever he pleases. If Obama is arrogant enough to ignore the first amendment and "dis"a huge bloc of Catholic supporters in an election year, think how full blown no-hold-barred out-of-control his attacks on freedom will be, if reelected.

To save America, we must select a conservative nominee best capable of defeating Obama. I believe that candidate is Newt Gingrich or Rick Santorum. I respect y'all too much to blow smoke claiming Newt to be a great conservative. Frankly, his attacks on Bain Capitol infuriated me. However, there are things I love about Newt. Newt is brilliant at articulating conservatism and experienced at successfully implementing conservative ideas. But most of all, Newt understands that the biggest, most destructive threat to America as we know it is Barrack Hussein Obama. And, also extremely important is the fact that Newt is not intimidated by the "race thing." Newt does not give a hoot about being called a racist. Newt is fearlessly eager to aggressively address America's problem which is Obama.

Romney and Paul are good decent men. However, I do not believe Romney has the stomach to say and do what needs to be done to defeat Obama. While I will enthusiastically support whichever of our candidates winning the Republican nomination, I disagree with Paul's foreign policy ideas.

I really like Santorum. However, I am not confident he can raise the funds necessary to override Obama's billion dollar campaign.

Also, right or wrong, like it or not, a presidential candidate has to have "it," a special charisma. How else could an inexperienced freshman senator like Obama win the presidency of the United States. Newt Gingrich has "it." Again, I admit, he "ain't" perfect. But, Newt does not wish to end America as we know it. Obama does and will!

Brother and sister patriot Americans, like Bonnie Tyler sang in her song, "I Need a Hero," America desperately needs a hero. I believe that that person is Newt Gingrich or Rick Santorum.

If Obama is allowed to continue his occupation of the White House after November 6, 2012, he will boldly remove his mask, completely revealing his face. There will be weeping and gnashing of teeth.