February 14, 2012
Are you as sick of hearing me talking about race as I am talking about it? For crying out loud, all I ask is that liberals please, please, please look beyond their emotions and Obama's skin color and honestly assess the man. It is stunning that liberals still think I should be totally committed to supporting this man solely because he is America's first black president and we share the same skin-color.

Suppose the black pastor of a church was discovered to be a child molester? Would the congregation continue to support their pedophile pastor because they share the same skin-color? Of course, not. 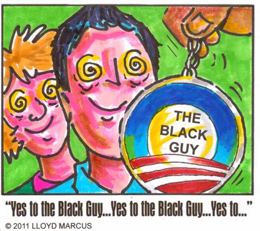 And yet, black actor Samuel L. Jackson, his liberal Hollywood buddies and a majority of black voters believe Obama's character, policies and agenda are irrelevant. Jackson said he voted for Obama because he is black. http://politi.co/AktzCW Americans are expected to mindlessly support Obama, especially black Americans, solely because Obama is black. Folks, not only is such thinking immoral, racist and scary, it is just plain stupid. By the way, I looove Samuel L. Jackson movies.

As Leader of the Free World, Obama's character and agenda are of the utmost importance. His skin color should be irrelevant. And yet, small-minded black racists and guilt-driven whites believe loyalty to skin-color should trump everything; right and wrong, good and evil. Sadly, Obama has caused even some Christians to forsake their first love, Christ, to worship an idol of race.

When Obama attacked freedom of religion by demanding that Catholic institutions fund baby killing, liberal Catholics continued their mantra, must support the black president. Committed Christians yelled, No, Mr President! Put us in jail, but we will not deny Christ for your evil mandate! A master of lies, manipulation, smoke and mirrors, Obama said, OK, I will order insurance companies to offer free abortion/contraceptive services. Bull Hockey! Nothing in life is free.

By forcing private insurance companies to provide free baby killing services, Obama is continuing his trashing of our Constitution. The president has no authority to force private industry to provide anything, nor can he force citizens to purchase anything. Obama's presidency is straight out of the Twilight Zone; an unprecedented outrageous overreach of power and assault on individual freedom. Still, Obama zombies demand that I support my black president. Obama is destroying MY country. Why on earth would I support him?

Urban black student's in the DC voucher school program were testing through the roof. Obama ended the program pandering to the teachers union whose dues fund the Democratic party. Obama denied black parents the right to rescue their kids from the dangerous black-board-jungle known as the DC public school system.

Self-induced black genocide. Half of all black babies are aborted. Blacks are the only race in America on the decline. By 2038, the black vote will be insignificant. And yet, Obama is obsessed with forcing taxpayers to fund Planned Parenthood. Oh, did I mention that Margaret Sanger, the founder of Planned Parenthood is an unapologetic racist? http://blackgenocide.org/planned.html

But Samuel, "true brothers" like you expect us to ignore Obama's passionate loyalty to an organization which was founded to exterminate blacks. Seventy-eight percent of Planned Parenthood clinics are in black neighborhoods. Thirty-five percent of babies aborted in America are black. Could Planned Parenthood be targeting blacks, giving us the "shaft"? Can you dig it?

Despite these documented Obama assaults on freedom, I will receive emails, "You should be ashamed being black and not supporting the president!" I do not reply to people who are "stuck on stupid and racism."

Here is a video illustrating the vitriolic disdain black mind-numb racists have for black conservatives. http://bit.ly/zyIjh9 This bullying black radio show host viciously attacks his female black conservative guest; insulting everything from her intellect to her physical appearance. He drills her. "Do you support Barack Obama?" His template — blacks not supporting Obama regardless of his policies/agenda are stupid traitors. He also believes the tea party is racist and blacks who belong to it are a disgrace.

I would have boldly proclaimed, "NO!, I do not support Obama. YES!, I am a proud member of the Tea Party" Then, I would proceed to nail that "jive turkey" to the wall with truth and facts. Though the host still would not get it, I prayerfully believe some in his audience would hear and receive the truth.

Mr Jackson, America has been pretty darn good to you. Your extraordinary success as an actor is well deserved. You earned it. But, what will in take for successful blacks such as you to set aside their bitterness and racism and liberal whites to get over their guilt to consider what is best for all Americans? Enough with the tired old 70s militant black rhetoric.

Mr Jackson, saying you support Obama solely because he is black is a slap in the face to the millions of your fellow American white fans who pay ten bucks a pop to see your movies. It is shameful for you to make such a blatantly racist proclamation. C'mon bro, I believe you are better than that.