December 18, 2012
RGIII (Robert Griffin III), superstar quarterback of the Washington Redskins is the latest black under attack by the Blackness Gestapo. The Blackness Gestapo are racists, black and white, who troll the airways keeping blacks in-check, faithful to their blackness. They believe to be authentically black, one must behave and think in certain ways. Blackness Gestapo mandated authorized black behavior includes having a chip on your shoulder against whites, maintaining an eternal victim and entitlement mindset, never achieving success without Democratic Party programs and never ever voting Republican. Blacks must call themselves African-Americans and display an urban edge via their speech, attire and attitude. 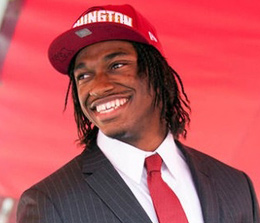 Blackness Gestapo enforcer, ESPN analyst Rob Parker accused RGIII of not being black enough. http://www.youtube.com/watch?v=Pl5sHu_cvDA Griffin comes from a great military family. His fiance is white. He is extremely articulate. He wants to be judged by his performance on the football field without regard of his skin color. Wow, what a radical concept in our new "everything-is-about-race" Obama America. Doesn't RGIII sound like he embraces the dream of Dr Martin Luther King, Jr that people be judged by the content of their character rather than the color of their skin?

But worst of all, rumor has it that Griffin might be a Republican.

The idiotic self imposed suppression of black liberation and growth by the Blackness Gestapo goes way back.

In the 70s, I remember watching an episode of the sitcom, "Good Times." A black politician was criticized by the black community for coming across too white. To prove his blackness and win black voters, the politician had to show he could speak an urban language called The Dozens. Clearly, the absurd restrictive message of the episode was regardless of ones education, racial loyalty requires that blacks maintain remnants of the hood.

Remember, the 90s comedy TV show, "In Living Color"? A standard joke of the program was the black guy who did not sound or behave like he came from the ghetto. The message was blacks who speak English correctly and prefer sushi over fried chicken are traitors trying to be white.

I witnessed the same brain-dead behavior from blacks here in Florida when brilliant articulate black Republican Jennifer Carroll ran for Congress against the Democrat incumbent do-nothing-for-her -constituents Corrine Brown. Brown's district was mostly black and ghetto. Brown had been in office forever without much positive change in her district. Carroll was smart and loaded with fresh new ideas. Brown won reelection hands down. Word on the street was Carroll sounded too white. Give me a break! Racist idiots!

Blackness Gestapo Generals Jessie Jackson and Al Sharpton had a "tude" against Obama for running for president without hood "creds" such as theirs. Obama had to prove his blackness by spending 20 years in Rev. Jeremiah Wright's racist church. The mainstream media partnered with the Democrats in hiding Rev. Wright's racist rants from the public to protect their first black serious socialistic/progressive contender for the Oval Office.

If I sound a bit frank in my language, it is because I am tired of Blackness Gestapo thugs threatening and stifling the growth of blacks. How dare they dictate the behavior of myself and other blacks.

American blacks are blessed to be born in the greatest land of opportunity on the planet. Just as whites are not monolithic, neither are blacks. We are individuals. Our God given birthright of freedom grants us opportunity to explore limitless tastes and behaviors without being chained by Authorized Blackness.

Forty years ago, I met a black fencing master — as in sword fighting. I was elated. I carted the brother to recreation centers across Baltimore. I wanted black kids to see black excellence beyond basketball, football, baseball and entertainment. I wanted them to see that blacks need not be limited in their abilities, hopes and dreams.

So Blackness Gestapo thug Rob Parker, get a life and mind your own business. RGIII is free to be whomever and whatever he wishes without you and your homey's approval. Wimp conservatives/Republicans say we must pander to your ilk to win the urban vote. That "ain't happenin'" as far as I am concerned. I will never sacrifice principles and values that I know are right and best for all people to the false god of votes. Racist thugs like you must and will be defeated.

Heck, this RGIII kid is so good, I just might become a Redskins fan. ...Nah. Go Ravens!