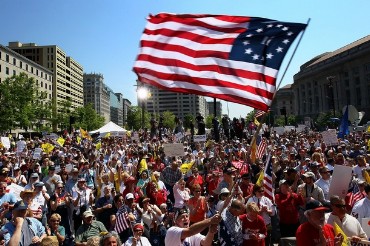 Brother and sister patriots, this is it. This is the big one. If we lose this battle, it is game over unless God intervenes. America as founded will be over. Democrats and socialist/progressives will rule forever. Therefore, this is the Tea Party issue of our times. I am talking about the passing of the Amnesty Bill.

The reason and urgency to pass amnesty is rooted in a big fat lie. Democrats and their cohorts in the mainstream media have convinced Republicans that Hispanics hate them. The Democrat's and MSM's tag-team lie is if Republicans do not pass amnesty, the Republican Party is over. Folks, the truth is the polar opposite. Amnesty for over 12 million illegals will usher in the end of the Republican Party, create mega-millions of new democrat voters and secure a new socialist/progressive America.

Alcoholics Anonymous defines insanity as doing the same things over and over again expecting a different result. Back in 1986 the government granted amnesty for 3 million illegals. In exchange, the government promised to secure the border. They said this would fix the illegal immigration problem.

They never secured the border. So now we have not just 3 million, but over 12 million illegals. The federal government lied to us back then and they are lying to us today.

Talk about deja vu all over again, it is horrifyingly clear that the lying deceitful Judases selling us this crock-of-excrement bill know border security "ain't happenin'" this time around, either. As I stated, government lied about securing the border in 1986 and they are lying about securing it again. The betrayal by our Republican leaders of you good folks, decent hard working Americans truly angers and sickens me.

We need to hold their feet to the fire – be relentless extremely annoying thorns in their sides and force the Republicans to say no to amnesty.

Also, I was shocked upon discovering this tidbit of U.S. History. Republicans owned California before the granting of amnesty in 1986. Today, California is owned by the Democrats and far leftists. So, why would the Republicans expect a different result this time around?

Sadly, we are being played and betrayed from all sides. Republicans, Democrats, so-called Conservatives and Libertarians are working together, selling out our country for various selfish reasons.

Judas sold-out Jesus for thirty pieces of silver, Esau sold his birthright for a bowl of beans and many political leaders who pledged loyalty to the Tea Party (We The People) have sold us out for frivolous rewards in DC. I am talking high school nonsense such as a desire to be liked by certain powerful people, praise from the mainstream media and invites to "A" list Washington DC parties. Yes folks, their reasons for betraying us are just that simple, absurd and disgusting.

Remember the passion you felt fighting Obama-care? That passion must be rekindled to fight the Amnesty Bill. Republicans have proven that they can not be trusted to do right by us or the country. Thus, they must be forced to do the right thing – to say "H – No!" to this insanity.

Flood your representatives with calls and emails. It is time to rally like never before. We must rally in numbers so huge that Republicans can not ignore our extreme displeasure with their planned amnesty. While maintaining the dignity, peaceful and lawful behavior characteristic of our Tea Party movement, we must force politicians to experience the full force of We The People at work.

During his interview on Rush's radio show, Ted Cruz explained why the Amnesty Bill is a disaster, why it is amnesty and why it must be stopped. And by the way, thank God for freshman Senator Ted Cruz. Cruz is one of us folks, a real-deal America lovin' Conservative with character and backbone. http://bit.ly/1bWGXcX

I hereby send out a clarion call to the Tea Party. Sound the alarm. Soylent Green is people! The Gang of Eight Bill is AMNESTY!

Break out your American flags and home-made signs. Singers and songwriters start freshening up your vocal chops. Speakers start fine tuning your speeches. It is time to Tea Party across America again. If we do not peacefully, but firmly, raise holy h – and amnesty is passed, America as we know and love it is over. Patriots, we have fought too long and hard to lose our country. See y'all at the rallies!