Lloyd Marcus
A new year: why Mr. President, why?

January 18, 2015
Happy New Year my fellow Americans. Getting my butt back into the gym is my New Year Resolution. I saw a guy I thought was around my age who looked fantastic, very muscular. He said he was 57; his secret was protein and creatine supplements. 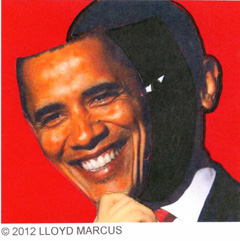 As I begin 2015, another year into the battle to save my country, I observe the daily news thinking, "Same old, same old." President Obama continues to, in essence, give congress and American voters the finger; arrogantly governing unilaterally against the best interest, the will and protection of the American people.

My dear friend Victoria Jackson, former star of SNL has been deemed a nut case for calling Obama a Muslim and a communist. http://bit.ly/1C5Obta While I can not confirm whether or not Vickie and other pundits are correct in their assessment, clearly Obama is on a different page than those of us who love freedom and America.

The question which continues to nag millions of Americans is why does this man do what he does? Why Mr President, why?

After abdicating your responsibility to enforce immigration law, why did you sued Arizona for enforcing immigration law; leaving Arizonians open to attacks from immigration smugglers and violent Mexican drug cartels? http://reut.rs/1AP7Mi4

Why do you block border patrol officers from doing their job? http://bit.ly/1lPVv6J Why did you dis American voters by granting executive amnesty to five million illegals? http://fxn.ws/1r2B5aj

Why are you planning to give illegals social security numbers, opening the floodgates for them to claim any number of credits; rewarding them for entering our country illegally with checks written by American taxpayers? http://bit.ly/1C5VWzo

You once admitted that an influx of illegal immigrants will harm "the wages of blue-collar Americans" and "put strains on an already overburdened safety net." http://bit.ly/1uCOrPF Why then would you implement an open border policy guaranteed to attract the poor from around the world; encouraging them to break our immigration laws and receive taxpayer funded handouts? http://yhoo.it/1508ZI6

Why have you forced schools across America to take in illegal students carrying various diseases? http://bit.ly/1BZD33i

Why did you join Al "scumbag" Sharpton and other race profiteers in furthering their insidious divisive hate-generating lie that America's police target and murder blacks? http://bit.ly/1AZJOmS

Why did you lie to the American people on at least 29 occasions that if they like their health-care plan and their doctor they could keep them? http://bit.ly/1DXzBpn

Why did you attempt to bully the beautiful ministry of Little Sisters of the Poor, a 100 year old order of nuns to violate their faith by forcing them to sign a form supporting abortion services? http://bit.ly/1AOMv83

Why does your Obama care continue to cause millions to lose health care plans they like and Cancer patients losing their doctors credited with saving their lives? http://bit.ly/1BZBNwW

Why did you deny additional security requests at our consulate in Benghazi which lead to the death of U.S. Ambassador Stevens and three other Americans during a 9/11/2012 terrorist attack? http://bit.ly/14V4X4g Why did you order the Benghazi Annex security team to "stand down" rather than attempt to rescue our Ambassador? http://bit.ly/1DFlFTs

Why were military assets not deplored to defend our Benghazi consulate and save our Ambassador? http://tws.io/17GYomR

Why did you send Susan Rice on five national TV shows to knowingly lie to the American people, telling them that the Benghazi attack was caused by an anti-Muslim youtube video that was seen by hardly anyone? http://bit.ly/SbNnmb Why do you persist in claiming that the war on terror is over despite glaring worldwide evidence proving otherwise? http://fxn.ws/1IJB1Vk

Why did you choose to pass on attending the historic Paris, France rally in which 40 nations came together against Islamic extremism? http://bit.ly/1BZwxcQ Why do you refuse to admit that we are at war with radical Islam?

Why did you release five lethal Taliban terrorist leaders and continue to release other terrorists certain to reenter the battlefield to kill more Americans? http://bit.ly/S8lElp

Why did you demand that the name of Jesus be covered up on a stage before you spoke? And yet, you passionately defend Islam. http://lat.ms/14y9Ije Why did you offer a new asylum decree favoring Muslims over Christians? http://bit.ly/1hiVCmU

Why have you forcefully burdened our military with social engineering policies which critics say will undermine good order and discipline for decades? http://bit.ly/1DZIyOP

Why have you launched a war on coal estimated to cost nearly a quarter-million jobs per year and force plants across America to close? http://bit.ly/1yhWZfa

Why do you vow to Veto the Keystone XL oil pipeline bill which will further energy independence and create jobs for thousands of Americans? http://bit.ly/1AAIC98

Folks, cited in this article is only the tip of the iceberg of Obama's war on America as founded: his attacks on traditional Americanism and Christian values – his unseemly attempts to divide us along racial lines to silence opposition to his overreaches – his thuggish use of government agencies to bully and intimidate Americans into submission http://bit.ly/1KKx9XS – his encouraging the sin of covetousness/class envy to divide Americans along economic lines – his attempts to addict as many Americans as possible to government dependency and his relentless efforts to diminish the worldwide influence of the United States of America.

Who are you Mr President? Why are you always on the wrong side of what is best for America and her people? What is your ultimate goal?

Many of us are scratching our heads, asking;...why Mr President, why?