Lloyd Marcus
Jail time for Christians: no longer a hypothesis

September 8, 2015
So this is how the game is played. Leftist operatives in the courts (supreme and state) create unconstitutional laws to further their anti-God agenda. Then, Leftists say those who disobey their lawless laws are not behaving like Christians and good Americans. Many on our side fall for it. 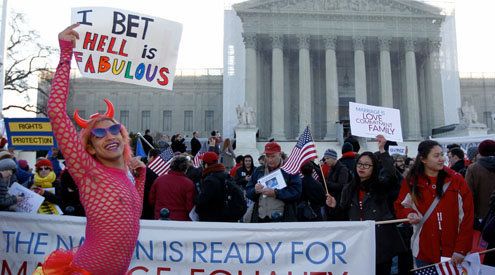 The SCOTUS' ruling on Obamacare and homosexual marriage means the Constitution will now say whatever Leftists want it to say. Folks do you realize that based on this new precedent, the Left can make anything they want a law; incest, pedophilia, bestiality and so on? Before you call me crazy, Leftists are already clamoring for the normalization of these sins. Have you heard of NAMBLA (North American Man Boy Love Association)? http://bit.ly/1N8epTy

Suppose our kangaroo supreme court decreed that ending slavery was unconstitutional. All blacks must report to government for their slavery assignments. How many idiots on our side would comply because Christians and good Americans must obey the law?

Meanwhile, it goes without saying that Obama is the most lawless president in US History; refusing to obey laws he dislikes. http://cbsloc.al/1fpki0B Sanctuary cities which are run by Democrats defiantly disobey federal immigration law at the cost of endangering and even the deaths of American citizens. http://bit.ly/1JH5NPj It is insane to allow these conniving vipers to claim moral high ground over us; lecture us about obeying the law.

Christians with their heads not buried in the sand knew jail-time was coming for Christians that refuse to bow down and worship homosexual's false god. http://bit.ly/1LQB0SZ

In response to the SCOTUS ruling on homosexual marriage, a mega-church pastor said he hoped it would not infringe upon our religious freedom. I thought, "Well duh!" That is the purpose of the attacks and lawsuits; to criminalize biblical standards.

Wedding chapels, cakes, flowers and everything else needed for homosexuals to marry are readily available to them. Homosexual's ultimate mission is to force Christians to rubber-stamp their behavior, thus betraying the true God.

This is why I get upset with Christians who still do not get it; labeling any push back as intolerant and unchristian, lecturing fellow Christians about showing these passive humble homosexuals more love. I want to scream, "This ain't about that!" This is about saying no to being bullied into embracing anti-biblical behavior.

The radical homosexual movement is a form of the Mark of the Beast. In essence, any business or household which does not display the homosexual rainbow flag over its doorway will not be permitted to exist.

Remember the pro football player that was fined and forced into sensitivity training for tweeting his disapproval of two men kissing on national TV. http://bit.ly/1Utv0XZ That is not far from being forced to display the homosexual rainbow flag tattooed on your forehead.

When did we lose the power folks, becoming subservient to 2% of the population http://usat.ly/1mI1FH5; forced to comply or end up in jail?

Kim Davis realizes that the Creator's Law trumps the creation's law. This is why she has the strength to in essence say, "Y'all can have a fit and even throw me in jail, I will not bow down and worship your god." Trust me, the forces of evil are outraged. Note that all the vitriol is coming from the Left, not from Christians.

Daniel was a high ranking highly respected government (King Darius) employee. A new law said everyone must pray only to King Darius. Daniel disobeyed, continuing to pray to the God of Israel. He was arrested and thrown into the lion's den. When interviewed by reporters from the Stone Tablet Times, I suspect some Christians trashed Daniel for noncompliance to the King's law.

Shadrach, Meshach and Abednego were government (King Nebuchadnezzar) appointees. The King built a golden statue, proclaimed it god and decreed that all must bow down and worship it. Faithful to the true God, the three Hebrew boys disobeyed the law, refusing to bow down or worship the government's statue. They were arrested and thrown into a fiery furnace.

Like Kim Davis, Daniel and the three Hebrew boys believed the consequence of betraying God is eternal; heaven or hell. It is hard to believe Christians are now forced to make such a choice in the United States of America.


"...I stand with Kim Davis. Unequivocally. I stand with every American that the Obama Administration is trying to force to choose between honoring his or her faith or complying with a lawless court opinion.

Frankly, GOP presidential contender Carly Fiorina saying Kim Davis should issue the license or resign smells of more GOP caving to the Left; we-don't-have-your-back politics as usual. This makes me a bit nervous envisioning Fiorina in the big chair in the Oval Office. http://bit.ly/1fVNjBZ

Fiorina's behavior takes me back to an article I wrote titled, "Which GOP Presidential Contender will Keep Their Word in the White House." http://bit.ly/1N9uad9

Again, thank you brother Cruz for leading the charge for religious liberty and We the People.