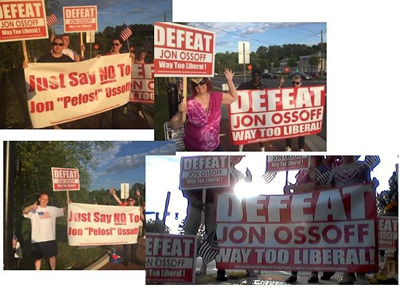 Mary and I are in Georgia working to stop Nancy Pelosi's far-left-radical hand puppet Jon Ossoff from stealing the GOP congressional seat vacated by Tom Price who is our new Secretary of HHS.

Our numerous Conservative Campaign Committee initiatives include waving signs on street corners. Folks, it is not pretty. While the majority of drivers honk their horns in favor of the GOP keeping the seat, Leftist Ossoff motorists are aggressive, mean-spirited and vicious, screaming at us across busy intersections, "F*** you!" and "Go F*** yourselves!" They are angry and filled with hate.

Ironically, Leftists are always accusing conservatives of being intolerant and mean-spirited. Talk about the pot calling the kettle black. Leftists hate and disrespect the U.S. Constitution and voters who disagree with them. Arrogantly, Leftists feel justified in cussing us out with impunity.

As a veteran black conservative Tea Party activist with 8 years and 500 Tea Party rallies under my belt, I can testify that our side does not behave like rude, crude and violent liberals behave. My mind flashed back to when I was on a national bus tour. Andrew Breitbart and our Tea Party Express tour bus were egged by viscous Leftists. On another occasion, a Leftist smashed a beer bottle against our bus and ran away.

Folks, this race is about turnout, turnout, turnout. If Ossoff gets 50% of the vote April 18th, he wins the seat; empowering the Dems anti-Trump narrative. We need Republican voters to turnout to force the race to continue to the June 20th election. http://eepurl.com/cKqzNb

Our CCC team will be back out there on another street corner tomorrow. Please pray for us. Leftists are mean.